Why Modi and BJP Thrive on Politics of Fear 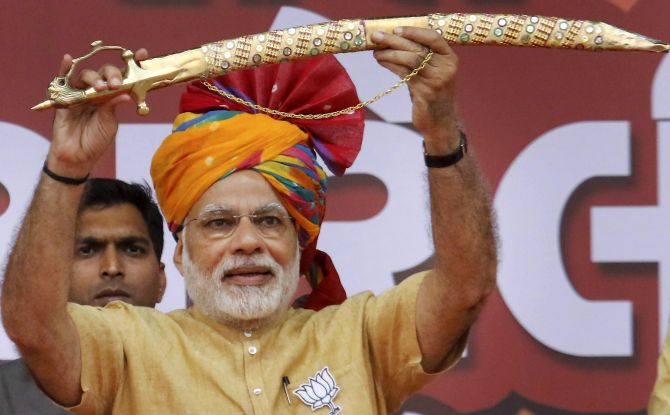 “Demagogues have always used fear for intimidation of the subordinate or enemies, and shepherding the tribe by the leaders. Fear is a very strong tool that can blur humans’ logic and change their behaviour,” wrote Arash Jayanbakht, assistant professor of psychiatry, Wayne State University. A neuroscientist, specialising in fear and trauma, Jayanbakht’s piece was an attempt to fathom why politicians worldwide, including American President Donald Trump, scare people to expand their support base.

Fear as a political tool defines as much the politics of Trump’s Republican Party as it does that of Prime Minister Narendra Modi’s Bharatiya Janata Party (BJP). Take the people of West Bengal, who are reeling under the fear that the National Register of Citizens (NRC), a pet project of the BJP, will soon be prepared for that state. Sweeping aside worries of earning their daily livelihood, they have stood in serpentine queues to collect documents that could establish their Indian citizenship. Eleven of them, in panic, have committed suicide. It is just the situation that warranted political parties to calm down the people.

Instead, the BJP has callously aggravated the popular fears about the NRC. BJP general secretary Kailash Vijayvargiya said, “Be 100 per cent sure about NRC [being implemented] in West Bengal.”

That the BJP revels in fanning the all-consuming fire of fear became palpable in Kashmir, where the Modi government pumped jackboots, incarcerated mainstream political and civil society leaders, and ordered a communication blackout before reading down Article 370 on August 5. This is largely perceived as a strategy to frighten Kashmiri Muslims into submission.

The BJP’s politics of fear is manifest in the Enforcement Directorate and the Central Bureau of Investigation, which the Supreme Court had once described as the government’s “caged parrot”, investigating politicians for corruption. Almost all belong to the Opposition; some are languishing in judicial custody.

Anyone who opposes the government is packed off to jail. Think of the nine human right activists still locked up nearly a year after they were dubbed ‘Urban Maoist’. Or the income tax notice served on Election Commissioner Ashok Lavasa’s wife, presumably because he had dissented against the Election Commission’s decision to clear Modi and Home Minister Shah of the charge of violating the model code of conduct during the 2019 poll campaign.

Neuroscientists trace the roots of the politics defining Modi’s BJP or Trump’s Republican Party to fear being hardwired into human beings.

They say fear was what ensured the survival of tribes: it kicked in the “flight-or-fight instinct.” They ran away from assailants or united to combat them. Fear is primal, yet surfaces at the scent of danger in the modern human. Politicians engage in fear-mongering to arouse the instinct for safety among a disparate people, divided by class, language, region, etc, for herding them into a cohesive group.

Jayanbakht argues, “That response [flight or fight] has helped us survive the predators and other tribes that have wanted to kill us. But again, it is another loophole in our biology to be abused… When demagogues manage to get hold of our fear circuitry, we often regress to illogical, tribal and aggressive human animals, becoming weapons ourselves—weapons that politicians use for their own agenda.”

This is precisely the BJP’s script in West Bengal. The exclusion of 19 lakh people from Assam’s NRC sparked a scramble among West Bengal’s people to secure documents for their citizenship. Since 11 lakh Bengali Hindus are said to constitute the list of the excluded in Assam, both Hindus and Muslims comprised the army of people scurrying around West Bengal’s offices for documents. This fact ostensibly contradicts Jayanbakht’s theory that leaders harness fear to carve out a united group of supporters for themselves.

But examine Vijayvargiya’s statement on NRC in Bengal to comprehend the BJP’s strategy of using fear to consolidate a ‘tribe’, so to speak. He said, “…Hindus have nothing to fear as we are soon bringing the Citizenship (Amendment) Bill.” The Bill says non-Muslims from Pakistan, Bangladesh and Afghanistan without valid travel documents will neither be imprisoned nor deported.

“As the national general secretary of the BJP,” Vijayvargiya said, “I want to assure all of you that NRC will be implemented but…each and every Hindu will be given citizenship.” Vijayvargiya is stoking tribalism in both Hindus and Muslims, but with the aim of generating contrary consequences.

Hindus are being rallied as a group, from which Muslims are excluded. It is a classic case of “us” versus “them”. Vijayvargiya said as much, “India is not a charity house that those who are the majority community in Bangladesh, Afghanistan and Pakistan (Muslims) can infiltrate, spread terror and take away the livelihood of our citizens.”

The BJP leader’s statement echoes Jayanbakht, who writes: “The typical pattern is to give the other humans a different label than us, and say they are going to harm us or our resources.” Tribal boundaries spring up between “us” and “them”; hate and aggression follow. “This is the human animal in action,” Jayanbakht declares.

Tribalism was stark in the triumphalism over the reading down of Article 370 and the lockdown in Kashmir. Outside the Valley, people jubilated over the prospect of buying property there, until then disallowed to non-state subjects because of Article 35A, which has now been abrogated. There were intemperate remarks, including from Haryana Chief Minister Manohar Lal Khattar, about the possibility of getting fair-skinned Kashmiri women as brides. The jubilation mimicked a tribe’s victory in the ancient past—of resources being appropriated from the vanquished and women taken into bondage.

In Tribalism: The Evolutionary Origins of Fear Politics, its author, Stevan E. Hobfoll, who is Chair of the Department of Behavioural Sciences at Rush University Medical Center, Chicago, says that hyper-nationalistic movements, among other types, are often presided over by the authoritarian father-leader, who amplifies the “need for affinity and belongingness of members of the group, and asks for sacrifice to the higher calling of the dream they provide.”

Modi does, in a way, fit Hobfoll’s bill. Recall how he appealed to the people to bear the hardships inflicted on them during demonetisation and when the Goods and Services Tax was implemented.

Hobfoll also says that the authoritarian-father leader “combines a kind of father-like authoritarian form of compassion and ruthlessness, spreading the message of great danger from external and internal threats, for which only he has the solution.” Recall Modi and the BJP selling the change in Kashmir’s status as an action none dared over the last seven decades, or the quality of his governance as being superior to anything India has experienced previously.

Hobfoll identifies the traits of the authoritarian father-leader—he is beset by grandeur and has an unflinching sense of superiority; he is manipulative and “any means justifies the ends” for him; he lacks anxiety or guilt when his acts harm others; he craves loyalty, allegiance and attention.

This is why Modi must be greeted by thousands on his return from the American trip, the gains of which remain nebulous. This is why Lavasa must be harassed because his dissent, subliminally, challenges the authoritarian father-leader and, therefore, his legitimacy. This is why bureaucrats must be intimidated lest one of them imitates the American whistle-blower whose disclosure haunts Trump. Dissent destabilises the leader’s self-proclaimed mission of protecting and nurturing the ‘tribe’.

This is also why politicians must be hounded and harassed because they can become an obstacle to the authoritarian father-leader’s ‘tribe’ expanding from 37.5% of India’s population—the BJP’s vote percentage in the 2019 Lok Sabha election—to as close as to 100%. Tribalism demands total domination of the terrain and complete annihilation of all rivals. That ensures complete security to the leader’s tribe.

Not for nothing did Vijayvargiya say that West Bengal’s Hindus have nothing to fear. Not for nothing did BJP MP from Bengaluru, PC Mohan, who is said to be the brain behind the idea of building a detention centre in the city for locking up Bangladeshis, declared: “I am only implementing the vision of our leaders Narendra Modi and Amit Shah.” These remarks flow from the BJP’s strategy of expanding the tribe, arousing its primal instinct, and validating the vision of Modi, the authoritarian father-leader.

The writer is an independent journalist based in Delhi. The views are personal.