Why Indian Pharmacies Are Reluctant To Stock Abortion Pills

Mumbai: Medical abortion drugs are not available at retail pharmacies in Rajasthan, a study released in August 2019 has found. In Maharashtra, only 1.2% medical shops stocked these pills, showed the study conducted across Bihar, Uttar Pradesh, Maharashtra and Rajasthan between September 2018 and January 2019.

Uttar Pradesh reported better availability--66% of the pharmacists interviewed said they stock the drugs--as did Bihar at 37.8%.

These prescription drugs, mifespristone and misoprostol, commonly referred to as medical methods of abortion (MMA), account for four out of five abortions in India undertaken by 10 million women every year, as reported by IndiaSpend in 2016. This implies a clandestine market in MMA, activists working in the field of women’s reproductive health alleged.

When asked why they did not stock MMA, 69.4% pharmacists cited “legal barriers”, said the study conducted by Pratigya, a network dedicated to women’s rights and their access to safe abortion care. This reason was quoted by 90.4% of those surveyed in Maharashtra and 75.6% in Rajasthan.

These “legal barriers” refer to concerns about sex-selective abortions that ensure the birth of only a male child, a practice common in countries such as India and China with a marked son preference in families. But, as we explain later, these fears about MMA’s misuse are misplaced--it cannot be used for sex selection because it is effective only in early pregnancy when the foetus’ gender cannot be determined.

“For women in India, access to abortion has been marred by extreme stigma, lack of awareness about its legality, unavailability of safe services near the community, and high costs charged by providers,” said Vinoj Manning, CEO Ipas Development Foundation, a not-for-profit organisation that works for safe abortion and contraception.

Abortion was legalised in India almost half a century ago, yet unsafe abortions--performed in unhygienic conditions by untrained providers--are the third largest cause of maternal death. An estimated 56% of abortions in India are unsafe, IndiaSpend reported in 2017.

MMA has a success rate of 95%-98% if administered properly, but the lack of medical supervision has resulted in a significant number of botched abortions in India.

The study surveyed 1,008 retail chemists across four states, interviewing at least 250 in each. The cities included were Bhagalpur, Darbhanga, Gaya, Muzaffarpur, and Patna in Bihar; Aurangabad, Mumbai, Nagpur, Pune, and Solapur in Maharashtra; Ajmer, Bikaner, Jaipur, Jodhpur, and Kota in Rajasthan and Agra, Ghaziabad, Kanpur, Lucknow, and Varanasi in Uttar Pradesh.

Rajasthan and Maharashtra were chosen for the study because there were reports of shortage of MMA in the market, VS Chandrashekar, CEO of Foundation for Reproductive Health Services, and Pratigya Campaign for Gender Equality and Safe Abortion, and writer of the study. Bihar and UP were chosen because they are highly populated and have poor socio-economic and health indicators, he added.

Most sales without prescription, study

Medical abortion pills are currently classified as Schedule H drugs, and therefore are legally available at pharamacists with prescription. But most clients come to ask for medical abortion drugs without a prescription, the study found, and therefore without information about the drugs.
“In this case, the obligation to give clients the right information about dosage and side-effects lies with the doctor and the chemists,” said Chandrashekar. “Many chemists also sell the medicine out of packs, in that case it is difficult for women or men to read the inserts.”

This form of abortion has prompted a new classification of “less safe” abortion by the World Health Organization. It is seen as better than “least safe” abortion, because it uses prescribed medication, rather than the introduction of foreign objects and use of herbal concoctions. But it is still not safe due to the absence of a trained provider.

‘Secret sales because of overregulation’

Why do authorities warn pharmacists against supplying MMA? The answer lies in the practice of sex-selective abortions in India.

From 2001 to 2011, India’s child sex ratio declined from 927 to 919 females per 1,000 males. In Rajasthan, it fell to 888 per 1,000, spurring the state into setting a target sex ratio of 940 by 2021, as reported by The Times of India in 2018. The Pre Conception and Pre Natal Diagnostics Techniques Act (PCPNDT), 1994, was brought in to tackle gender-biased sex selection in India, and raids and crackdowns were conducted on retail pharmacists and provider sites stocking MMA.

This conflict between providing abortions and fighting the declining sex ratio in Rajasthan and Maharshtra has “created barriers and roadblocks to women’s access to abortion care”, the study said.

Whilst 31.8% of pharmacists were told by drug authorities to sell them on prescription, 45% (and as much as 73.3% in Rajasthan) were told to not sell or keep the drug, the study found.  Most (56%) retail pharmacists interviewed for the study considered MMA to be overregulated compared to other Schedule H drugs. In Maharashtra, this response came from nearly all pharmacists (91.7%).

“As a result, medical abortion drugs are often secretely sold at chemists in Rajasthan off-record, for five or six times the price,” said Rajan Chowdhury, a Jaipur-based social activist who works in the field of women’s rights.

But the regulatory pressure on pharmacists stocking MMA is misplaced, said Chandrashekar. MMA cannot be used to facilitate sex selection because foetus’ sex can only be determined after the 13th-14th week of pregnancy while MMA has to be used within nine weeks.

Sex selection makes up 9% of abortions in India, it was found in 2015.

The overregulation of MMA not only prevents access to abortions, but also results in low knowledge about the pills as well as the legality of abortions among pharmacists. “The Pratigya Campaign is very concerned about this,” said Chandrashekhar.

The number of retail druggists who reported being trained on MMA was low--15% in Bihar and 9% in Uttar Pradesh, for example. Upto 64.5% reported getting information on the drugs from brochures and booklets. When asked, 35% of pharmacists could not recall the name of the drugs used for medical abortion. More than half of retail chemists thought that abortion medication is not useful for women.

There were signifacant gaps in awareness about abortion among pharmacists--43% thought that they are illegal in India despite its legalisation through The Medical Termination Of Preganancy Act in 1971. In Rajasthan, upto 60.7% thought abortion is illegal. 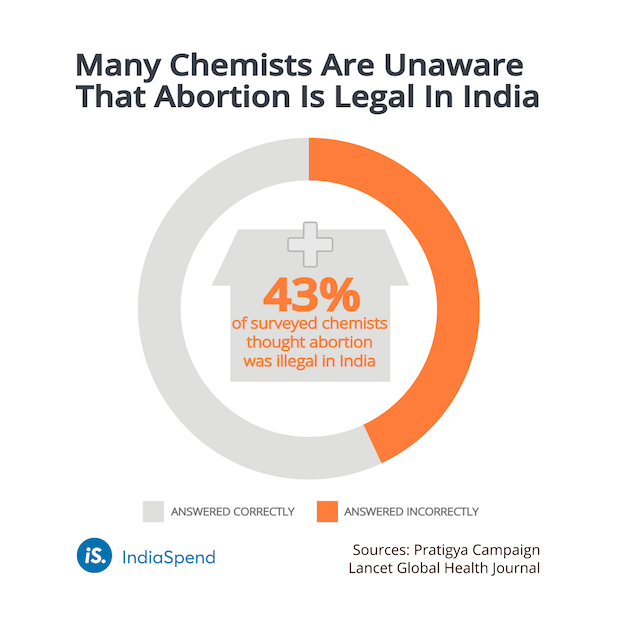 Three of four who stocked MMA were not aware that abortion is legal up to 20 weeks of gestation. A higher proportion of them (40%) considered abortion to be legal only upto 12 weeks of gestation. Awareness of this detail was the least in Uttar Pradesh at 9.5% though the state had the highest number of pharmacists stocking MMA (66%).

Less than a third (30%) of pharmacists were aware that the MMA drugs have to be taken within the nine-week limit. Just as many retail chemists misunderstood this period to be seven weeks. 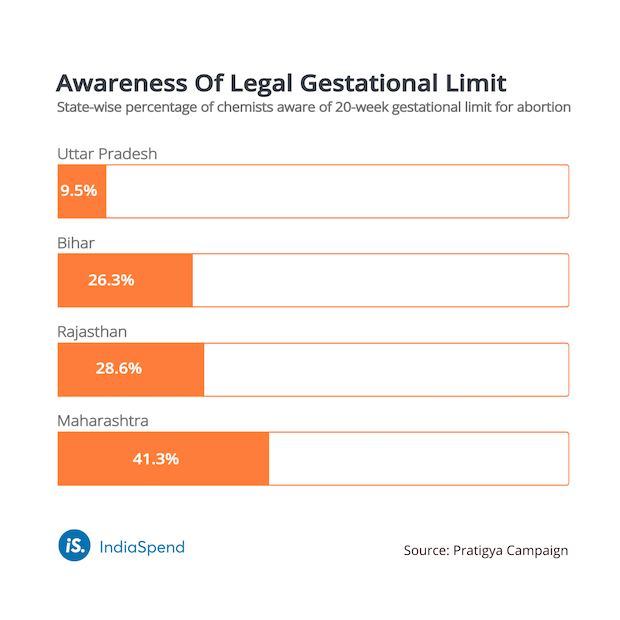 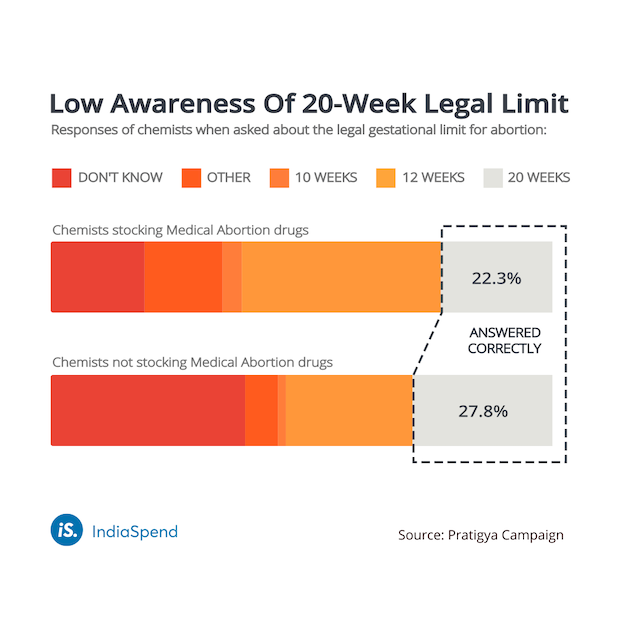 No awareness among users

Since the providers are untrained, few women who buy MMA without a prescription get necessary counselling about the drug, its usage and side-effects. This is the “biggest problem women are facing”, said Kalpana Apte, secretary general, Family Planning Association of India and a member of the technical advisory group at the Pratigya Campaign.

Less than half the respondents (45.7%) were able to recommend the correct dosage of MMA to clients, 29.8% knew nothing of how it was to be taken, and 43.4% when. Upto 80.8% reported that they gave no information about the side-effects associated with the drug and this was despite the fact that 29.5% of clients returned to complain about side-effects. To those who complained, nine out of 10 druggists suggested that they consult a doctor. 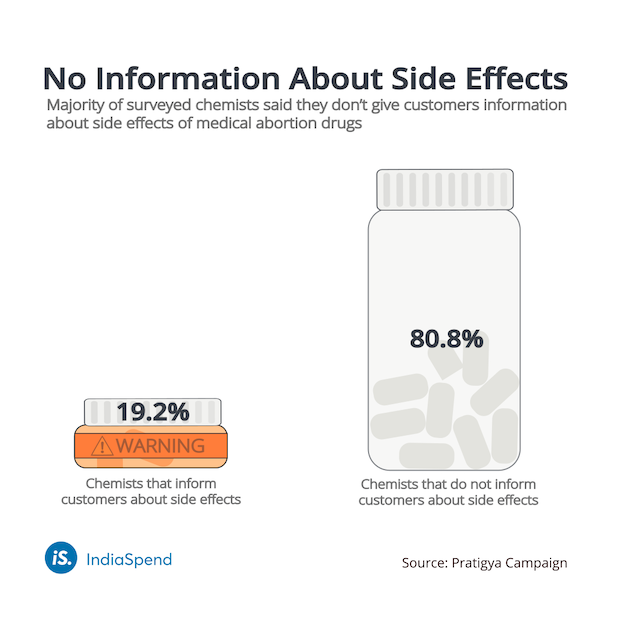 “Currently, there is no training for Rajasthan chemists and when they give the pills it is without any guidance or instructions,” social activist Chowdhury said. “Going forward chemists must become more responsible for the sale of MMA, and give adequate warnings about its use.”

Apte and Chandrashekar both recommended increasing the base of doctors and nurses who can prescribe medical abortions, in line with recomendations from the World Health Organization.

“At present, only 60,000/70,000 doctors can prescribe MMA drug in the whole of India,” said Chandrashekar. “Widening the pool of providers to all doctors can increase doctors in India able to prescribe this drug to 800,000-1 million.”

This story was first published here on Healthcheck.

(Habershon, a graduate from the University of Manchester, is an intern with IndiaSpend.)