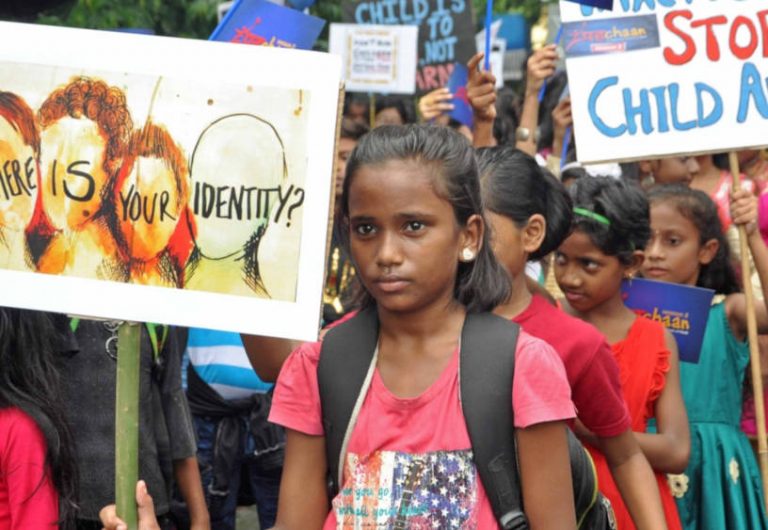 Kolkata: Children participate in an awareness rally against child abuse.

Mumbai: Cases registered over four years to 2016 under the Protection of Children from Sexual Offences (POCSO) Act, 2012, a law meant to protect children and hasten prosecution, will end only by 2022 based on the current rate of disposal, according to a new study.

Gujarat and Arunachal Pradesh, which reported the greatest backlog, will take 55 and 101 years, respectively, to finish with such cases, according to a study by Kailash Satyarthi Children’s Foundation (KSCF), an advocacy run by an Indian Nobel laureate.

While only 10% trials were completed, the conviction rate was 30% for 2016.
Source: Kailash Satyarthi Children’s Foundation

Keeping the disposal rate of 2016 (10%) constant, some states such as Punjab and Nagaland would take about two years, while states such as Gujarat and Arunachal Pradesh would take more than 50 years to complete cases registered until 2016. Source:Kailash Satyarthi Children’s Foundation , Crime in India 2016, National Crime Records Bureau
Until 2012, when POCSO was passed, sexual offences against children were covered under three sections of the Indian Penal Code (IPC): Rape under Section 376, outraging modesty of a woman under Section 354 and unnatural sexual acts under Section 377.

With the introduction of POCSO, other forms of harassment were also included. Most importantly, the Act was made gender-neutral and specifically designed to protect child rights and ensure the judicial system would be child-friendly.

Investigations by the police should be completed within two months and the trials within six months, according to amendments made to the POCSO Act and Code of Criminal Procedure (CrPC) by an ordinance in May 2018.

The Supreme Court later ordered high courts to ensure POCSO cases were heard by designated special courts, allowed no adjournments by POCSO judges and constituted special investigative task forces by state police chiefs, the Hindu reported on May 1, 2018.
Why cases are pending under POCSO law

“There has been a rise in the number of cases being registered because of increased awareness and mandatory reporting,” said Yashwant Jain, member, National Commission for Protection of Child Rights (NCPCR), which oversees POCSO.

The shortage of judges was documented by IndiaSpend in a three-part series (here, here, and here) and earlier this year.

Only 559 special courts are in place (84%) and only 438 (65%) special public prosecutors have been  appointed out of the 665 designated district-wise courts/prosecutors, NCPCR data show.

Constituting special courts and appointing public prosecutors does not mean that the staff increases or is even exclusive in handling POCSO cases. They are also burdened with work from regular courts, according to a 2017 study by the National Law School of India.

“There is also a delay in getting the forensic science laboratory (FSL) report, which further forces the police investigation to postpone their deadline,” Jain said.

Due to inadequate staff and infrastructure at forensic labs, 12,072 DNA samples and as many cases were pending in six central forensic labs till December 2017, the Hindustan Times reported on April 26, 2018.

Another major reason for the delay in investigations is the shortage of police personnel, said Surya Prakash B S, programme director, DAKSH, an advocacy.

As on January 1, 2016, India was short of 500,000 police personnel, according to data from the Bureau of Police Research and Development.

“The case life cycle is at the discretion of the parties and their lawyers,” Surya said. “It is often delayed due to the adjournments from the petitioner’s side.”

Although adjournments are not allowed under the POCSO Act, they are allowed. “Senior judges should ensure that the Act is followed, which it never is, and hence cases remain pending,” Surya said.

Delay in justice has an adverse effect on survivors. “They suffer a range of psychological problems resulting in self-blame and self-harm, lack of confidence, fear and attempt to suicide,” Menon said.

(Kulkarni, a post-graduate in social work, is an intern with IndiaSpend.)


This article was first published on indiaspend.com