Written by Rajiv Shah | Published on: July 22, 2019
Even as sticking to his original argument that India's gross domestic product (GDP) since 2011-12 has been overestimated by 2.5%, renowned economist Arvind Subramanian has said in a fresh paper that his estimate of post-2011-12 growth rate at around 4.5% is surely not "implausibly low", as some of his critics have been arguing following his controversial June paper. 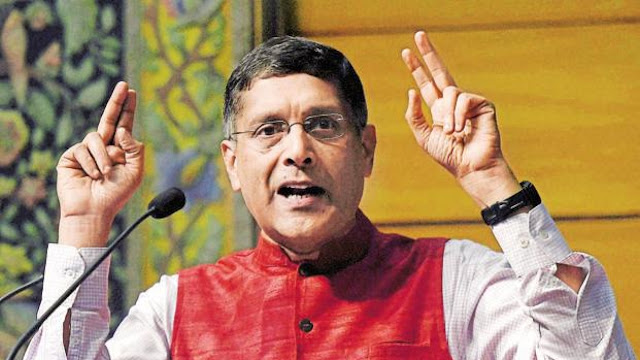 Replying to his critics (he doesn’t name his critics), who include the Prime Minister’s Office, Subramanian states in his new paper, "Prominent commentators have argued that the growth over-estimation cannot be large... They have argued along the following lines: '4.5% growth is a disaster. India’s economy is not a disaster. Ergo, India cannot have grown at 4.5%'.”

According to Subramanian, who resigned as chief economic adviser of the Narendra Modi government in June 2018, the critics’ argument is based on several “cognitive benchmarks", one of them being, “How can India be growing at pre-1980 levels (dubbed as ‘Hindu rate of growth’), when the economy three decades ago was in much worse shape?”
Currently with the Center for International Development at Harvard University, Subramanian says, the critics’ view is that “4.5% growth is difficult to accept” because “it harks back to the pre-1980s era of the 'Hindu rate of growth'.” They wonder, “How can the Indian economy today, with all the changes that have happened, be comparable to that old performance?"

Insisting that 4.5% rate of growth is "impressive" because "today’s GDP level is five times what it was in the 1980s”, Subramanian says, “The 1.5% growth was achieved at a per capita GDP of US$1000, meaning that the annual increments in income were very small in dollar terms. Today’s 3% per capita implies annual increases in income that are ten times larger."

"Most impressively", the economist continues, is that "a 4.5% growth rate is a notable achievement in the current, post-Global Financial Crisis world. In fact, if we take all the large major economies of the world, say those with GDP greater than $1 trillion dollars (there are 13 of them), India, at 4.5% real GDP growth, would be the second-fastest growing economy in the 2012-2016 period, just as it was in the 10 years preceding.”

He adds, "Indeed, India’s 4.5% is well ahead of the third fastest growing economy, Korea which grew at 2.9%. And it may well be that even at 4.5% India is the fastest growing large economy if account is taken of China’s growth mis-measurement."

No doubt, Subramanian underlines, "To be sure, a pace of 4.5% GDP growth for India would represent some under-performance." However, he adds, even if other countries "have been growing rapidly such as Bangladesh, Vietnam etc. it is far from being a disaster."

At the same time, the new paper titled "Validating India’s GDP Growth Estimates", presented at the India Policy Forum (IPF) organized by the National Council of Applied Economic Research (NCAER) in New Delhi on July 10, 2019, argues that it was during 2002-2011 that "India behaved like a typical fast-growing country, with measured GDP growth exhibiting a strong correlation with other demand indicators."

During that period, he says, "GDP was growing at about 7.5%, while investment and exports were growing more rapidly, at 13% and 15% respectively, in line with the median value of 12% for both variables in comparable fast- growers."

However, post-2011, Subramanian asserts, "The Indian economy was hit by a series of shocks". The first was the "export collapse": "During the 2000s, emerging markets were buoyed by strong global demand for their products, which enabled their exports to grow rapidly on average. Since 2011, however, global demand has decelerated, causing emerging market export growth to collapse." 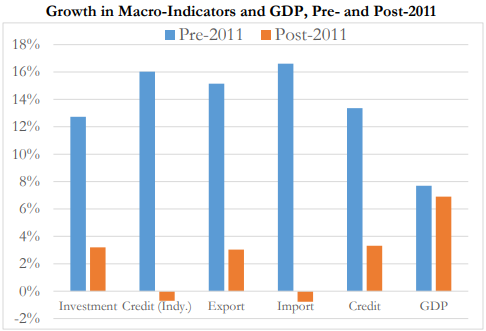 According to him, "In India, export growth fell to just 3% from an average of 15% per year in the pre-2011 period. Since India’s export-GDP ratio during the period 2012-16 was about 22%, this shock had the potential to reduce growth substantially."

The second was what he calls the "Twin Balance Sheet (TBS) problem": "During the boom of the mid-2000s many companies invested heavily in projects that did not work out, leading to considerable stress in the corporate sector and double-digit levels of nonperforming assets in the banks. As a result, many firms have been not been financially strong enough to invest, while banks have been reluctant to lend to even to healthy firms."

"In India", he notes, "Real credit growth slowed to 6% from 14% pre-2011. More importantly from an investment perspective, real credit growth to industry slowed to a paltry 1% from a torrid 15%.” He adds, “Unsurprising that investment growth declined by 10 percentage points, which could knock off another 2½ to 3 percentage points in growth."
According to Subramanian, while declining oil prices and a consequent improvement in the terms of trade for India as a net oil importer did boost growth by about 1 to 1.5 percentage points, there were other shocks, too which “affected” some of the years since 2011.

According to him, it all began under UPA-2 (2012-2013), when there was loss of macro-stability, characterized by "rising macro-economic distress, corruption scandals, and paralysis in decision-making, leading to the balance of payments near-crisis of July/August 2013."

Then, during 2014-15, the "agricultural sector was struck by drought for two consecutive years", and "the growth in food grain production in these years were -4.9% and 0.5%, well below the long run average of roughly 3%. This exerted a downward drag on growth, amounting to roughly 0.4%."

Finally the demonetisation (2016) was a "large macro-economic shock, when currency supply was reduced by 86% in November 2016, affecting output in the large informal sector, which relies heavily on cash."