Written by Charul Agrawal | Published on: September 18, 2019
“Urfe Aalo” a play by the Whistle Blower Theatre group, forces its audience to confront the harsh reality of manual scavenging – an occupation which is no less oppressive than bonded labor. It talks about Nilesh, a Valmiki trying to get out of the caste imposed occupation. Nilesh while in school was associated with a theatre group for social awareness, and he wanted to continue acting. His father, Dinesh, himself working as a manual scavenger asks Nilesh to leave college and start working as a sanitation worker to feed his family. 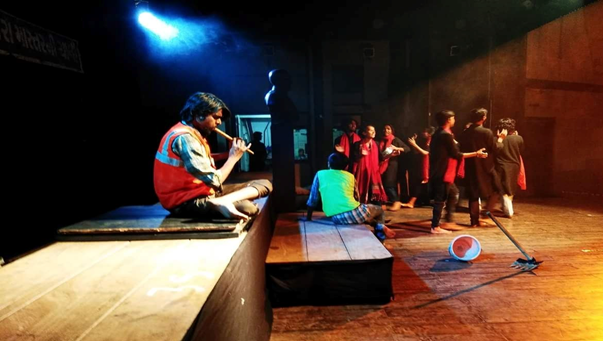 Nilesh opposes his father and continues with theatre, but shortly Dinesh dies of suffocation in gutter. Thereafter, Nilesh sets to find employment but is turned down due to his caste. Ultimately, even he is forced to do what his father did for a living. Sadly, this is not just any tragic story; this is the story of lakhs of Valmiki families that have been bonded to manual scavenging.
This play was performed in the Indian Institute of Management (IIM)- Ahmedabad by the Whistle Blower Theatre group. All the actors and members of the group are or were students of Shree H.K. Arts College. These students got together for performing theatrical arts and participating in competition but ultimately ended up performing social issue-based theatre. It is inspiring to note how a group of actors took up the role of social change drivers.

“Urfe Aalo” is inspired by a childhood experience of Maulikraj, their director. He recalls – “In my childhood, my friend – Vinod slapped me when I like all others called him “Aalo.” Do you even understand what Aalo is, Vinod asked, and I didn’t know what it meant. Aalo was a Gujarati slang, which meant “one who begs for food.” Vinod had earned this name because he belonged to the manual scavenging community, which goes around asking for food in the community, which they clean.

Nilesh, the protagonist, represents Vinod, while the character of Dinesh, the father is inspired by Dinesh Bhai, a sanitation sweeper near their college. Dinesh Bhai plays flute beautifully. Still, his family, asks him – why do you play the flute? They believe that it is a waste of time. He set aside all his hopes and aspirations and resigns to the reality that he is a Valmiki and he is destined to clean gutters.

Through such interactions with the Valmiki community as well as through secondary research, the group conceptualized the play, portraying the dominant themes while also designing the playset to enable the audience to visualize the life of a manual scavenger and empathize with this cause. They have performed the play “Urfe Aalo” a total of 35 times till now in different formats.

The group believes that issue-based theatre has transformed them as social beings. Almost all of them joined college, not knowing what they wish to do in their lives ahead, but theatre has given direction to many of their lives. Some are now pursuing a masters in social work, one of them has developed a community center in his chawl, and few of them have also decided to pursue developmental journalism.

Their changed perspectives towards social issues easily manifest themselves through the instances they shared. Pallavi recalled – “My family kept a different utensil for the sanitation worker (Shardaben). After “Urfe Aalo,” once my mom asked me to give Shardaben water. I gave her water not in the Shardaben glass but in a glass that all of us in the family use. When my mother retorted, I explained her rather strongly – How would you feel if someone behaved with you in a similar manner?”

Another group member Dipak recalled, “I have always seen people sweeping roads but never thought about who they are. Through the theatre, I saw a change in myself. Now I like to talk with people sweeping roads, people belonging to other oppressed communities and understand their perspective”.

Such issue-based theatre has the capability of playing a transformative role for the society as a whole, first affecting the artists, their families, and then their audience. The interactions that these artists have with individuals from oppressed societies brings about a change in their attitude and behavior. They also bring changes in the lives of people whose story they tell. Dinesh bhai’s family which didn’t let them play flute, after watching their play, encourages him to do so.

As more and more people get exposed to such Nilesh and Dinesh through theatre or in real life, they would be able to empathize with the cause and would themselves move in the direction of social change.

I would like to wish the Whistle blower Theatre Group all the best in their mission to sensitize their audience to the issue of manual scavenging among many others and to drive social change. First published in Counterview.