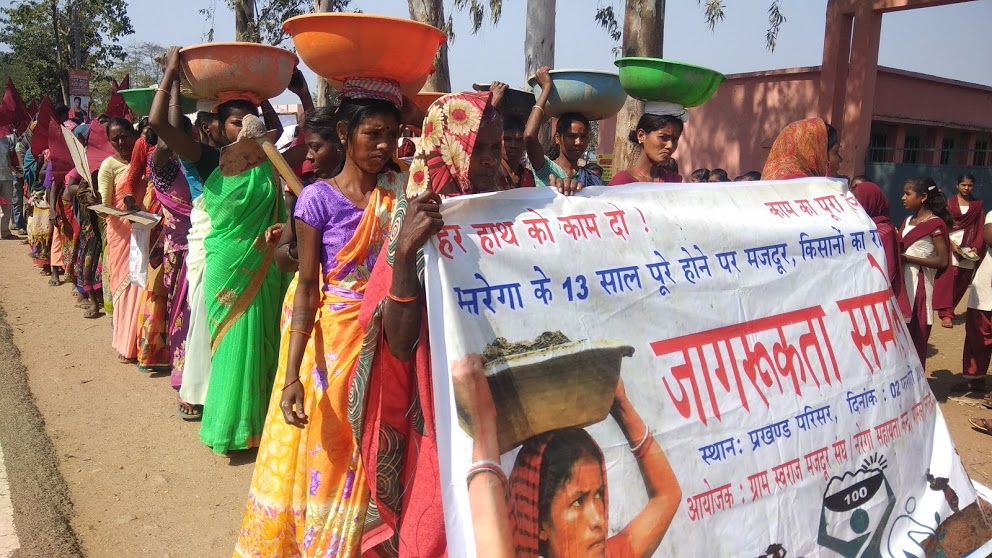 Even as many parts of the county suffer from drought, the new government at the centre has allocated a mere Rs 60,000 crores for the National Rural Employment Guarantee Act (NREGA) for the ongoing financial year. This is Rs 1,084 crore less than the revised budget estimate for 2018-19. Expenditure would have been much higher last year had the government met the full demand for work and made timely payment of wages. Also, almost Rs 4,000 crore from this year’s budget was used for clearing previous years’ liabilities. This leaves only about Rs 56,000 crore for the ongoing year.

To ration the limited funds, the central government does not release them regularly, which in turn delays the payment of wages. It also does not pay the full compensation amount entitled to workers, or unemployment allowance in case of denial of work. Due to the government’s unwillingness to allocate adequate funds for NREGA, the notified NREGA wage rates are much lower than the state-wise statutory wage rates. This has made NREGA work unremunerative in most parts of the country.

The widespread violations of workers’ entitlements due to inadequate funds for NREGA are worsened by the use of inappropriate technologies in the implementation of the programme. But instead of conducting an honest assessment of the impact of technological interventions in NREGA, the central government has been repeating false claims about the benefits of these interventions. Many of these claims, particularly those related to the advantages of linking Aadhaar with NREGA, are discussed in chapter 10 of this year’s Economic Survey.

The Economic Survey draws heavily on a working paper titled “A Friend Indeed: Does The Use of Digital Identity Make Welfare Programs Truly Counter-Cyclical?” by Sumit Agarwal, Shradhey Prasad, Nishka Sharma, and Prasanna L Tantri. As explained by Sakina Dhorajiwala, Anmol Somanchi, and Rajendran Narayanan, the conclusions of this paper are based on incorrect assumptions and show their ignorance of ground realities of NREGA.

The first misleading claim is that the integration of NREGA with “Aadhaar Linked Payments” system in 2015 streamlined the wage payment system. This claim ignores the significant reduction in siphoning off of wages after the switch from cash payments to bank/post office payments, which began as early as in 2008. It also disregards the widespread disruptions caused due to the forced and hasty linkage of NREGA with Aadhaar. A staggering number of wage payments are rejected due to reasons such as errors in the entry of Aadhaar numbers in the NREGA Management Information System (MIS), linking of Aadhaar with wrong bank accounts and the mysterious issue of “Inactive Aadhaar,” which even the government is unable to explain. In order to meet bank account opening targets, many NREGA workers have been forced to open multiple accounts. In Aadhaar Linked Payments, a worker’s wages are credited in the bank account that was last linked with Aadhaar. But workers are often unaware which of their accounts is linked with Aadhaar, and thus run pillar to post in search of their wages.

The working paper and Economic Survey also argue that Aadhaar Linked Payments have reduced the ratio of delayed wage payments. What they refer to delays are actually only those that take place till the Fund Transfer Order (FTO) is generated. Aadhaar has no role to play in reducing these delays. Further, significant delays take place in the processing of FTOs by the central government, transfer of wages into workers’ accounts and withdrawal of wages from banks. The government has no estimates of these delays and thus workers are not even compensated for them. According to an analysis conducted two years ago based on a sample of 9 million NREGA transactions, it was found that after a FTO is generated, on an average it takes 50 days for the wages to get credited in the worker’s account.

Based on the incorrect claim that Aadhaar has reduced wage payment delays, it is argued that the demand and supply of work increased in drought affected areas after 2015. There is no acknowledgement of the role played by the public interest litigation filed by Swaraj Abhiyan in 2015 which demanded immediate drought relief measures. It was only after the Supreme Court issued stern orders that the central government was forced to allocate additional funds to increase the scale of work in drought affected areas and clear pending wages.

The ES claims that “the number of beneficiaries and the funds transferred under DBT under the Scheme has jumped manifold from 2015-16 to 2018-19”. The ‘manifold jump’ is nothing to be proud of since, the whole “Aadhaar Linking” drive has been a coercive process. Moreover, the figures cited in the ES hide the reality of large scale exclusions and chaos on the groundas a result of Aadhaar linking.

The analysis of NREGA’s performance in the Economic Survey seems politically motivated. Facts have been distorted to imply that no effort was made to improve the delivery of the programme before 2015 and that all technological innovations introduced in NREGA by the NDA government have been successful. There is no acknowledgment of the growing disinterest of NREGA workers from the programme due to unremunerative wages and unpredictability in wage payments.

NREGA Sangharsh Morcha and People’s Action for Employment Guarantee demand the central government allocates at least Rs 88,000 crores for NREGA (this estimate is based on the projected demand for work available on the official NREGA website, adjusted for inflation). Also, the government needs to conduct an honest evaluation of how Aadhaar and other technological interventions impact the implementation of NREGA and immediately discontinue those initiatives that violate workers’ entitlements.