Written by Debmalya Nandy | Published on: June 8, 2019
The Bharatiya Janata party has returned to power with a thumping majority. The party had won 303 Loksabha seats on it’s own while the National Democratic Alliance( NDA) managed to bag 353 seats in all. The United Progressive Alliance(UPA) could manage only 85 seats while the congress party is reduced to 52 seats; 8 more than what it achieved in 2014. 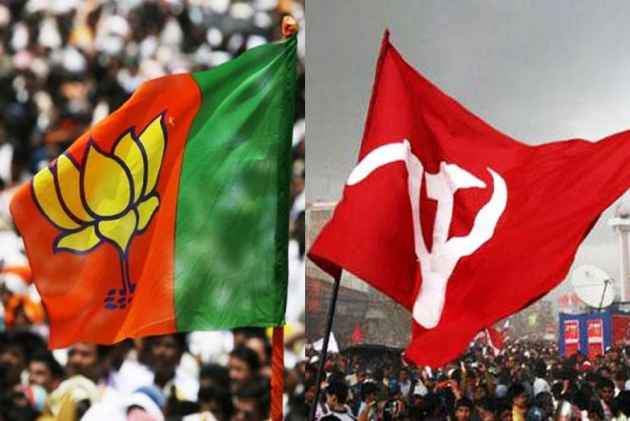 The Communist Party Of India( Marxist), have massively lost it’s political grounds to the Trinamool Congress since 2009. In 2014 the party managed to win just 2 seats but their total votes share was hovering around 30%. This year, The CPI(M) was handed the biggest disappointment as the party could not even manage to open it’s account and their votes share declined to a mere 6.28%.

While the Trinamool congress has a positive swing of around 4% in the total votes share, the BJP is clearly the top gainer in these elections which managed to get 23% more votes than the last time. The congress party has also lost around 4% than the previous occasion, while the CPI(M) is the biggest loser with a 23% negative swing in terms of votes share.

The numbers show that large number of voters who had voted for CPI(M) in 2014 have chosen to vote for the Bharatiya Janata party in this election. The All India Trinamool Congress (AITC) which had actually fared better than the last general elections in terms of votes share, have been stranded by the large chunk of anti-incumbency votes going BJPs way. It is quite obvious that the Congress too had lost it’s voters to the BJP but it could still maintain their 2014 performance while the CPI(M) not only lost the 2 seats that they owned last time, it had been completely wiped out in this election. The communist party has been gradually losing it’s political grounds in the state since 2009 when the TMC had massively capitalized on the anti-land acquisition movement in Singur. CPI(M) since then have failed to win the trust of the voters and lost significantly in the subsequent Loksabha and Vidhansabha elections. In this general elections of 2019, the CPI(M) has been completely thrashed and rejected by the people of Bengal. The party has lost it’s political relevance completely and now heading for further embarrassments in the next assembly elections which is suppose to take place in 2021.

A large chunk of grass root cadres of the CPI(M) who remained with the communist party all these years despite heavy political dominance by the Trinamool Congress, finally gave in and supported the BJP which provided a safe shelter for these grass root CPM workers who had been facing great atrocities and fear due to local political dynamics. With the rising popularity, the BJP had managed to strengthen their organization in almost every corner of the state and the CPM cadres were left with no other choice but to support the saffron party at the local levels to vote out the TMC. It is a failure of the communist leadership that it could not ensure safety or shelter for it’s cadres who had to join hands with the right wing party to fight against the Trinamool Congress. More worrying is that the BJP could strengthen it’s organization and mobilized huge number of local youths who were motivated to fight against the wrong doings of the TMC but the left could not capitalize and rise to the situation. One can argue that the Bharatiya Janata Party banked upon the hindutwa politics and mobilized large number of hindus and pitted them against the TMCs pro-muslim image but the real communist failure lies in the fact that within a span of only 8 years since the communists were dethroned, the political culture took a religious turn and the BJP could rise to a level of strength that is now impossible to ignore. Like the rest of the country, in Bengal too the upper caste hindus have suddenly found their religious identities and dominant social positions, in trouble and fell prey to the BJPs Hindutwa Project. The nature of majoratarian politics is such that the dominant majority which enjoy certain social benefits and incentives would not bother about the issues of minorities and further in a country like india with economic distress spread across all the religions and castes, it becomes way more easier to polarize the majority and gain significant electoral relevance. The cleverly created narratives that the social positions of the Hindus are under threat and that the poor economic conditions of the Hindus are a result of reservations and incentives given to the minorities is almost impossible to counter in the current socio- political scenario as the majority Hindus would not find a reason to not relate to this narrative. More concerning is that the soft hindutwa approach soon converts into extreme polarization and the irrational narratives like Kashmiri’s are terrorists, Muslims are pro-pakistan or sympathizers of the minorities are anti-nationals, become dominant perceptions which had given the BJP great electoral benefits in this election. In West Bengal too, the BJP had found it’s political grounds by projecting the Mamata Government as Muslim appeasers. It had constantly raised the issues of illegal immigrants from the Bangladesh entering into the Indian side through active support from the ruling party in Bengal. The BJP had also been hugely successful in brain washing the educated urban upper caste Hindus who now believe that Mamata’s special favors for the Muslim community is a threat for the Hindus. Ridiculous narratives decided the fate of this election in Bengal. A very common perception among the Urban Hindus in Kolkata is that Mamata is actually a Muslim herself and thus has a special bias towards the Muslim community and the Hindus are being neglected because of that. Although the CPI(M) is no where in the political fray and the party is just a mere spectator in this political battle royal but the very idea on which the political battle is currently fought in Bengal, shows a massive failure of the Communists who ruled the state for more than three decades.

It is still understandable that the rural grass-root cadres of the communist party in their quest of survival chose to support the local saffron groups as the powerlessness of the communists, weakening grass root organizations of the party could not provide adequate support and most importantly safety to these people who had been even made to escape from their own villages and stay in exile for long years but the peculiar case of the urban ardent CPI(M) supporters have no real explanation or logic.

A lot of ardent CPI(M) supporters in Kolkata suddenly started to believe that the saffron party is the need of the hour to vote out the Trinamool Congress. A very common narrative that is surfacing in the city is that the BJP under the leadership of Modi will be able to eradicate the ill- governance in the West Bengal. Strangely enough a large section of the committed CPI(M) voters have opted to vote for the BJP citing reasons of under development and deterioration in the political culture in the state. A lot of people also feel that the BJP will end the Syndicate Raj in Kolkata and will provide good governance. The most disturbing fact is that even the committed CPM supporters had bought into the anti Muslim narratives and many could be seen blaming Mamata for favoring the Muslim community. In short, even the long time supporters of the communist party considered BJP as an alternative to the TMC and not CPM. Call it the political awareness or misguided political orientation but it is a fact that the urban committed CPI(M) supporters have chosen to go with the flow and vote for the BJP to root out the TMC. Talking to the people,one thing is very clear that it was a conscious political choice to go with a party which has more chances of winning against the current incumbents.

The CPI(M) leadership need to worry that even their most trusted lot have been relying on the BJP to end the misrule of the TMC. It is indeed should be a deep concern for the CPI(M) that the so called communists are keen to replace a fascist government with another fascist right wing party which have been gaining politically by religious polarizations, bigotry, divisive policies and relied heavily on false and misleading communications through different means to spread their agenda. If the communists are not being able to see the threats of a BJP rule in India even after the first five years of the saffron regime, there needs serious introspection among the communist leadership to find out what exactly had went wrong in their organization building processes. It should investigate why the hindutwa biases are so strong even within the party workers and ardent supporters that it is dominating the major issues like under development, economic distress, joblessness, atrocities on the minorities, exploitation and vulnerabilities of the tribals. The secular values that the communists claim to have injected among it’s party workers and supporters have vanished , soon as the party lost power. However this great debacle for the communists and the great rise of BJP in Bengal has shown that the core values have never been strongly rooted even among the most dedicated communists.

Now Bengal is witnessing a very strange political chaos. Many leaders and thousands of party workers from the TMC have joined the BJP in the last couple of weeks. There is a speculation that as the BJP grow more , many top level TMC leaders will also join BJP and are currently in talks with the BJP leadership. So very soon, Bengal will have a strong BJP with half of the TMC induced in it. One can however argue that Narendra Modi will magically convert TMC goons into saints.

The CPI(M), riding on the victory of the BJP, now have been able to open a few party offices, which were closed for years since the TMC came into power and took control of the localities. Much to the embarrassment of the leadership, the local cadres have been openly talking about supporting the BJP in the recently concluded elections.

Winning from Singur, the BJP’s MP Ms. Locket Chatterjee had declared that she will try and bring the TATAs back to the Singur. Soon after the BJP won the seat, several farmer’s rallies could be observed demanding the return of the Nano factory in Singur. Incidentally during the time of the famous Singur protest, Ms. Locket Chatterjee was a member of the TMC party and had been actively involved in that movement.

The Crime Bureau of Investigation(CBI), meanwhile had given a clean chit to Mr. Budhhadev Bhattacharyya in the case of Nandigram Police firing, citing that it was not him who ordered the firing.

It is a strange political phase in Bengal where a right wing party is becoming stronger with support from the committed left voters and the left minded progressives are choosing a right wing party over the communist party in order to eradicate another fascist party. Now with several TMC leaders joining BJP, it is inevitable that the BJP will be more powerful and it will leave the left more emaciated.

The Left ideology may still be alive in the street actions and public movements but the bigger question is, will the left become like an NGO and will continue issue based mobilization or will it re-organize the internal structures and functions. The Bengal results raise a very pertinent question, can the left survive without the left supporters completely subscribing to the left ideologies?

Debmalya Nandy is a social Worker