Written by Sabrangindia | Published on: October 6, 2019
A special bench of the Supreme Court has been constituted to hear an urgent plea on the Aarey matter. A notice to this effect came up on the court’s website at around 8 p.m.. The notice read:

“That a special bench has been constituted to hear the matter tomorrow, ie October 7, at 10 a.m., on the basis of a letter dated October 6, 2019 addressed by Rishav Ranjan with regard to the felling of trees in Aarey forest, state of Maharashtra which has been registered as a public interest litigation.” The notice does not indicate which bench will be hearing the matter.

Meanwhile, by  the afternoon on Sunday the 29 young persons indiscriminately arrested by the Mumbai police were released on bail while the prohibitory orders in and around Aarey Colony continued. 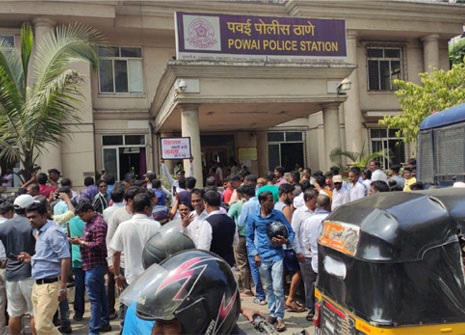 Twenty-nine people got bail on Sunday after they were arrested  for protesting against the felling of trees for a metro car shed in Mumbai’s Aarey colony. The bail order was read out in releaf by parents and activists who have been supporting the #Save Aarey movement. The bail order may be read here: Through the mid afternoon of Sunday, hundreds of thousands of protesters gathered at Aayer, around the area that was cordoned off. Senior Dalit leader, Prakash Ambedkar was detained by the police. He is also the chief of the recently formed Vanchit Bahujan Aghadhi (VBA) that has been contesting several seats in Maharashtra.

In 24 hours since 9 pm on Friday, the Mumbai Metro Rail Corporation Limited (MMRCL) cut as many as 2,134 trees in Aarey Milk Colony.  On Saturday, the Mumbai Police arrested 29 people and imposed prohibitory orders in and around Aarey Colony, where protesters camped for 24 hours to prevent the felling of trees. In what is being seen as a callous and hasty move, implements to brutally axe trees were silently brought in to the Aarey area even while the Bombay High Court was in session on Friday and the petitions were actually rejected.

@ConserveAarey @saveaarey Sahir and her mother are standing on JVLR to protect Aarey. Sahir's father Shashi Sonawane got detained 2 days back in Aarey. He has not met his father since then. #SaveAarey #SaveAareyForest https://t.co/2MDVcGEcBa Prakash Ambedkar was detained by police at the Powai entry of Aarey. Prohibitory orders continued to be in force in Aarey Colony and surrounding areas for the second day. Heavy security was deployed at Aarey Colony’s five entry points, including the key connecting road near the Western Express Highway, to prevent people from going towards the area and to avoid any untoward incident, PTI reported.

Most of the shops, restaurants and roadside stalls remained closed in the area in view of the imposition of Section 144 of the Criminal Procedure Code (CrPC), banning unlawful assembly, since Saturday.

The felling began Friday night, hours after the Bombay High Court dismissed four petitions challenging the Brihanmumbai Municipal Corporation permission to cut 2,646 trees on 33 hectares of land at Aarey for the construction of a Metro Line 3 rake depot.

Patrolling was stepped up in the tribal hamlets located in Aarey area and those found assembling there were being taken into custody, but later let off after proper verification, police said.