Sand mine workers keep up rally against illegal sand mafia 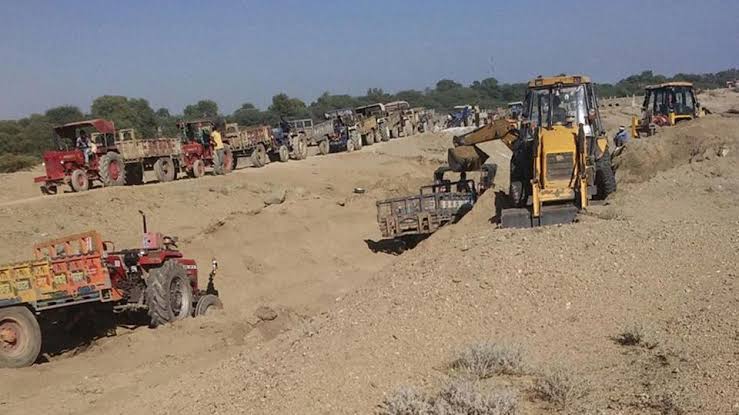 Led by the All India Kisan Maha Sabha (AIKMS) on November 6, 2019 thousands of sand mine workers assembled at Bheeta hill to protest against the ban on boats, use of machines by sand mafia and lodging of false cases against leaders of sand workers.

Workers from more than fifty villages - from Allahabad, Kaushambi, and Mau where work has been effected and more than 1 lac families have been rendered jobless, gathered to protest against the illegal sand mafia and the complicit administration.

To support the workers in their quest for justice, the rally was led by members of the AIKMS, advocates and other leaders from villages where workers have been affected.

Giving a voice to the people who have been devoid of their rights, the leaders took charge to explain the misery of the workers – they are left with no income, their children are being expelled from school for the fees is not paid in time and the sick are suffering because there is no money to seek treatment for their ailments.

By stopping operations of the boats on river ghats and allowing the sand mafia to continue mining there, instead of mid-stream. It has been reiterated by several government organizations and corroborated by High Court orders from various states that mid-stream mining and dredging is a normal activity to clean the river bed and is not harmful to the environment as well.

The boats have been banned citing an order from the National Green Tribunal (NGT), which only states that JCB sand mining machines be removed from the site.

Several High Court orders also have banned the use of machines, but the administration has shown no respect for these judgments. When JCB machines dig up embankments to extract cheap sand, they destroy the aquatic and biotic life on embankments and also disturb the natural flow of the river. Leaders say that the Allahabad officials are refusing to accept this truth.

Leaders also alleged that Piyush Ranjan, the lone lease holder is illegally charging Rs. 6,000 for a ravanna (receipt) for which he pays the government only Rs. 600.

In the rally, which is set to continue till the administration doesn’t heed to the demands of the locals, leaders requested the officials to dismiss the false cases lodged by the police against innocent protestors. The police, who are hand-in-glove with the mafia, have filed cases against people who are not engaged in mining under the Gangster Act which is not applicable in the matter.

Protestors and leaders have also requested that the administration include not just the revenue officials and contractors, but also the worker representatives and village pradhans in all decisions related to sand mining so that the interest of the workers are protected.