Role of the Hindu Right in Communalising Politics and Politicising Religion

With an excerpt from Ayodhya: City of Faith, City of Discord 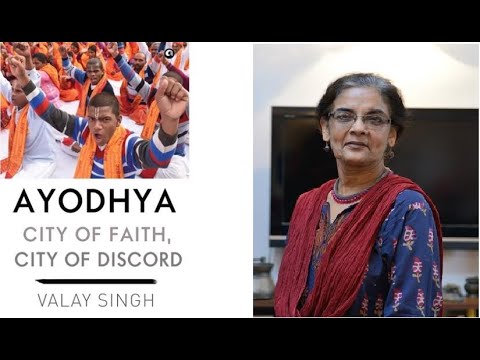 Written by Valay Singh and published by Aleph (2018), Ayodhya: City of Faith, City of Discord is a biography of the city Ayodhya. Over thousands of years, Ayodhya has been a place of reverence for many faiths; but it has also been a place of violence, bloodshed and ill-will. Going back almost 3,300 years to the time Ayodhya is first mentioned, Valay Singh traces Ayodhya's history, showing its transformation from an insignificant outpost to a place sought out by kings, fakirs, renouncers and reformers and, later, becoming the centre-stage in Indian politics and the political imagination.

But what is the history of Ayodhya, and the now demolished Babri Masjid?

A panel of speakers that included Romila Thapar, Kunal Chakrabarti, Zoya Hasan, and Valay Singh, discussed this and other questions at the book launch of Ayodhya: City of Faith, City of Discord in New Delhi. Academic and political scientist Zoya Hasan talked about the politics of hindutva; how Ayodhya prepared the grounds for BJP's rise to power; how the Hindu right uses religious symbols, cultures, and institutions to create a Hindu vote bank and move towards a majoritarian state. Hasan also discussed the collective failure of the political institutions of this country in resolving the Ayodhya conflict.

The last stretch out of the disputed complex is a 500-metre walk in the acquired land. The side of the road is strewn with the rubbles of the several temples that were broken under the Kalyan Singh-led BJP government in 1991.

Further in the distance lie the remnants of the KuberTila, another Ayodhya mound whose origins are now untraceable. The Hindus claim it as being part of the sacred territory of Ramkot, or Ram’s fort, while the few remaining Muslims of Ayodhya insist that on the KuberTila was a mazaar of a Sufi saint where pregnant women used to pray. These Hindu and Muslim claims have been accommodated together in the legend of the hanging of Baba Ramchandra and Ameer Ali during the revolt of 1857. This version was immortalized by Ram Gopal Pandey ‘Sharad’, author of Ayodhya’s Blood-soaked History and editor of Virakta. As it is situated inside the acquired land, the KuberTila is out of bounds for the common public, as is the grave of Musa Ashikan, which is said to lie close to it. The Buddhists believe that like other mounds in Ayodhya, KuberTila too is of Budhist origin.

On the final stretch of the exit route, the sight of a grand building greets visitors all of a sudden. Topped by a conical structure made of precious-looking stone is the building of the Sri Aurobindo Ashram. It is a tranquil place and is very unlike the rest of the temples and ashrams in Ayodhya. It almost feels out of place. Here, the teachings of the Mother and Sri Aurobindo of Pondicherry are preached and practised by the followers of the sect. The ashram was founded by Sri Ramakrishna, who discovered Sri Aurobindo’s teachings while he was living in Ayodhya in the 1940s. Like many spiritual seekers he had escaped marriage by running away from his home. He joined the ashram in Pondicherry in 1945.

After dedicating this ashram and adding to Ayodhya’s religious and spiritual diversity, he passed away in 1998. Right after the boundary of this establishment lies a street lined with shops selling all kinds of souvenirs and idols of Ganesh, miniature Shivlings, framed photos of Ram parivar (Ram, Sita, Lakshman, Bharat, Shatrughan and Hanuman), sandalwood, janeu and other items.

CDs of the demolition of the Babri Masjid, and booklets of a new recension of Ayodhya’s Blood-soaked History written by Ram Milan Tiwari were being hawked by young boys and men. The CDs and booklets are quite popular and never fail to attract the attention of pilgrims. The CDs are also continuously and loudly played by shopkeepers to attract customers. The noise of the demolition is a visual representation of the booklet, with the addition of dramatic commentary and background music. The film seems more like an exercise in propaganda to incite those like us who had just received darshan of Ram Lalla. However, both the film and the booklet fail to mention that the karsevaks also destroyed the Ram Chabutra1on 6 December 1992. The movie opens with a young man shouting in a hoarse voice:

Jis Hindu ka khoonnakhaule, khoonnahin wo paanihai
(The blood of a Hindu which doesn’t boil, isn’t blood but water)

Jo Ram ke Kaam na aaye, wo bekar jawani hai
(Youth not in the service of Ram is youth wasted)

The first sentence appeared to imply that those who don’t share the outrage of karsevaks also deserve their blood to be shed like water—they can be killed or removed from the path towards building a Ram temple. The second slogan was used to exhort young men—and some women too—to join the Ram Janmabhoomi movement between 1986 and 1992. These slogans are used less frequently now as the movement for a Ram temple is no longer the single point of the BJP’s agenda. But it remains one of its trump cards.

The film repeats VHP-approved statistics such as ‘3.75 lakh Hindus were martyred for the cause of the Ram temple’, and ‘seventy-six religious wars have been waged on Muslims by Hindus, now Hindus are ready for the seventy-seventh battle’.2The figure of 3.75 lakh is absurd and has no basis whatsoever, but to its credit the VHP has turned puerile propaganda into popular history. Even so, most of the tourists prefer watching parts of the movie for free. Many of them do pick up copies of the Blood-soaked History of Shri Ram’s Birthplace and the CD for their neighbours and families. The fact that these CDs and booklets are continuously sold outside the disputed site, under the ever-present and watchful eyes of multiple intelligence agencies, is proof that there is tacit approval from them. But most people, like the two middle-aged women resting their age-worn knees at a tea shack just behind the shops, didn’t seem to be bothered by the high-decibel propaganda. ‘What is the benefit of darshan if one has to suffer so much,’ one of them said aloud, addressing nobody in particular. Just then, her tea arrived and the man who served it also gave her the answer, ‘When Ram Lalla himself is in pain, why should we not be!’

For most of the tourist-pilgrims who come on organized package tours, it is their only visit to Ayodhya. They have ticked it off their list. Similarly, most residents of Ayodhya stay away from the Ram Janmabhoomi temple, and not only because of the hassles involved in getting a darshan of Ram Lalla. To them, ‘Ram is Ayodhya and all of Ayodhya is his birthplace’. But Sonu, the tea-bearer, was perhaps expressing the pain of Ayodhya’s common people ‘who suffer the pain that Ram Lalla suffers’.

‘It is difficult for us too,’ Sonu said, as for many years now they have been living under a security lockdown much like the idols of Ram Lalla and his brothers. ‘Terror is a real and ever-present threat here,’ he added. All the covert and overt intelligence agencies of the state and central government are deployed in Ayodhya. Ayodhya is a potential target for terrorists and any incident there can trigger communal convulsions across the country. It used to be said in the 1990s and in the first half of the following decade that ‘a small ripple in Ayodhya can cause a storm in India’. While that might seem far-fetched today, the town remains a dormant volcano capable of causing eruptions in the entire country. The Ram Janmabhoomi–Babri Masjid complex is the magma chamber of this volcano.