A separate petition to Madhya Pradesh chief minister Kamal Nath, floated by the Narmada Bachao Andolan (NBA), close on the heels of a similar plea by “Friends of Narmada” to the President, the Chief Justice of India, and the Prime Minister, has sought “immediate action” to rehabilitate thousands who have been displaced due to the Sardar Sarovar project in Gujarat. 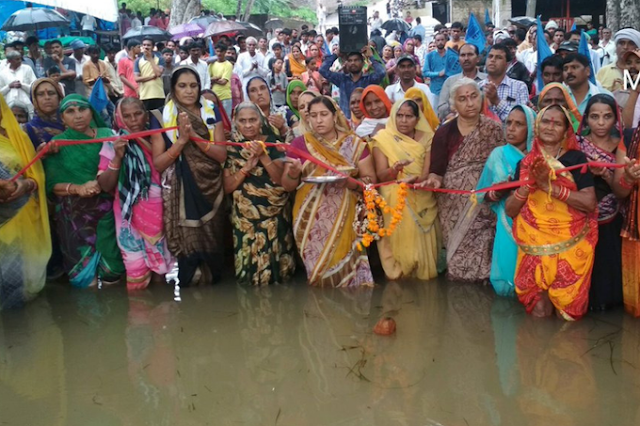 Medha Patkar with supporters on the bank of Narmada

Seeking signatures from supporters, the petition, which has been released a day after Parkar rejected Kamal Nath’s offer to quit hunger strike, insists, “Until the rehabilitation is complete, the water level of Sardar Sarovar should remain till 122 meters. In the Narmada valley, Medha Patkar and 24 other women from the affected villages continue to remain on an indefinite fast.”

Those willing to sign the petition have been asked to email the following text to Kamal Nath:

Thousands of families in the affected villages of the Narmada valley Sardar Sarovar project are being inundated by the reservoir water. So far, three poor farmers from Nimar and other tribal regions have died as they combated the rising water levels.

Even as your government has protested against the decision of filling the reservoir to its limit of 139 meters, but the Sardar Sarovar Narmada Nigam Limited (SSNNL) affiliated with the Gujarat and Central government have continued to fill the reservoir without paying any heed to the concerns of rehabilitation of the displaced, environmental damage, and in the absence of any fact-finding reports or affidavits.
Thousands of families in Madhya Pradesh have not yet been fully rehabilitated, as residents at the rehabilitation site have not been granted adequate access to facilities as per their legal rights. In this context, the displaced people are made to witness their farms and livelihoods being submerged under the water. In this situation, we are confident that the Government of Madhya Pradesh will stand on the side of the people.

According to the letter sent by the Chief Secretary of the state of Madhya Pradesh to the Narmada Control Authority (NCA), dated May 27, 2019, a total of 6,000 families from 76 villages are residing in the submergence area. 8,500 applications, 2,952 for farmlands and others for the eligibility of compensation of rupees 60 lakh, are still pending.

According to the Narmada Bachao Andolan, not just 6,000 people from the 76 villages, but many more families (approximately 32,000 families) are affected. Can the shopkeepers, small business people, artisans, potters, boat people allow the destruction of their villages, in the absence of access to rightful alternate livelihoods?

There is very slow progress on these issues. Today, it is important to follow the right procedures, as the last 15 years have seen a lot of corruption, lies and confusion. Unfortunately, the corrupt activities have still not been arrested. Since the previous government, assurances given to withdraw the petitions filed in the High Court and Supreme Court have not yet been fulfilled.

Therefore, Madhya Pradesh must see to it that the water level in the Sardar Sarovar does not rise above 122 meters. We seek your support for Narmada Bachao Andolan towards this goal.
You and your party have supported the displaced people by not only providing assurances in your election manifesto, but also by standing directly with them. In 1996 as well as in 1978 Narmada Bachao Andolan, all party agreement had been reached on this issue.

After 34 years of non-violent struggle, Medha Patkar Ji and 24 other women from the affected areas have been forced to sit on an indefinite fast.

According to the Narmada Water Dispute Tribunal and the orders of the Supreme Court, ensuring complete rehabilitation of the people in the submergence area is their right as well as the legal responsibility of the state.

We, therefore, expect that your government takes sensitive, just and immediate action on a war footing.