An excerpt from Bridging East and West


Edited and annotated by Chinmoy Guha, Bridging East and West: Rabindranath Tagore and Romain Rolland Correspondence (1919-1940), brings together, for the first time in English, letters and telegrams that are among the finest exchanges of thought between the Indian poet Rabindranath Tagore (1861-1941) and the French novelist, playwright, and biographer, Romain Rolland (1866-1944) — the East and the West.

The book records the differences of opinion and misunderstandings between the two outstanding humanists of contemporary history, who often felt isolated in their own countries, on issues like Gandhi and Fascism. It is also the story of a profound friendship, where Tagore and Rolland unlock their hearts to each other.​ This correspondence, comprises 46 letters and telegrams, along with three dialogues between the two at various times, as well as letters by Rathindranath Tagore and others.

The following is an excerpt from the Introduction to the book: 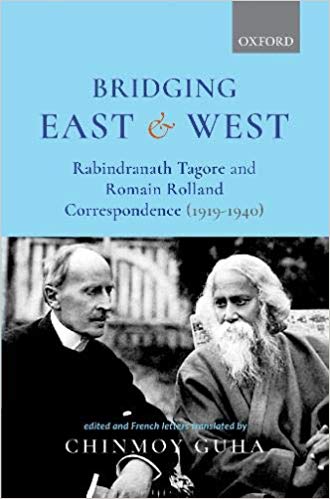 To the magic bird of India I offer this youthful song of a little blackbird of
France who was trying his wings, on leaving his nest.

— To Rabindranath Tagore, with my affection and respect.

Quest for an Alternative Discourse
Is the near-forgotten interface between two cultural icons from India and Europe—Rabindranath Tagore2 (1861–1941) and Romain Rolland3 (1866–1944)—one of the most significant dialogues of the last century,4 which Isaiah Berlin5 described as ‘the most terrible century in Western history’?6 These two visionaries, both prolific letter writers, tried to build bridges between the East and the West at a crucial point of time in history when ‘the whole race of mankind seemed to be in a cataclysm of death’.7

The two Nobel laureates in literature, who won the award consecutively,8 suffered intensely at the advent of war and questioned the whole idea of the frontier and disrupted the notion of the nation as ‘a narcissistic narrative of national progress’.9 It was a journey towards the imaging of a different world which would create the possibility of not only a different kind of space, but a new space outside cultural hegemony. It was a quest for an alternative discourse.

Was it not inevitable that these two should meet in a moment of chaos and anxiety, each representing an era, its tension, its battles, its dreams? Always in search of a cultural idol who could radically transform the prevalent discourse, Rolland’s encounter with Tagore, at first so improbable, seems almost preordained. Like their friendship, this correspondence (1919–40) too was a fascinating cross-cultural encounter, an intimate fireside conversation, an interface not only between two historical and cultural discourses, but between two great artists who, in spite of their mutual respect and admiration, occasionally collided with each other, and yet never gave up. This correspondence is a document of this heroic endeavour to create a new imaginative space for mankind in times of deep anguish and pain. Rodolphe Schlemmer’s10 excellent photo, which framed together Rolland and Tagore in Villa Lionnette11 in Villeneuve, Switzerland, in July 1926, posted it for eternity and remains in many ways a symbol of international understanding and peace.

[…]
In their attempt to create an intercultural discourse, they exchanged at least 46 letters and telegrams between 1919 and 1940. Published for the first time in English, these letters—which are now in the public domain—will not only narrate the story of a profound friendship but also an account of their conscience. There is a splendid serenity in these letters. They also reveal a subterranean tension when the two did not see eye to eye on some fundamental political issues of the time, like Latin American dictatorship or Mussolini’s fascism. As Rolland wrote so significantly to Kalidas Nag12 on 8 February 1923: ‘Tagore’s letters are a testimony of the highest value. Whatever Tagore writes has something ethereal about it: it is the song of a “Prophet-bird” (the title of a beautiful page by Schumann),13 but it also sets in motion a historic debate’.14

[…]
Tagore had written to his son Rathindranath in 1916: ‘The era of nationalistic parochialism is over. The first beginning of the global fraternity of the future will be seen in the greens of Bolpur’.15 He probably meant what Frantz Fanon would write many years later: ‘National consciousness which is not Nationalism, is the only thing that will give us an international dimension’.16 ‘The idea of the Nation’, Tagore stated in nationalism lectures, ‘is one of the most powerful anaesthetics that man has invented. Under the influence of its fumes the whole people can carry out its systematic programme of the most virulent self-seeking without being in the least aware of its moral perversion—in fact feeling dangerously resentful if it is pointed out’( Nationalism 25–6).

What really prompted the transnational dialogue between Rolland and Tagore was the latter’s tirade against ‘the menace’ of ‘the organized selfishness of Nationalism’ (Nationalism 23) at the Imperial University of Tokyo in June 1916, which Rolland noted down in faraway France in his diary, calling it ‘ un tournant dans l’histoire du monde’17 [a turning point in the history of the world, Inde 13]. ‘The Asians are now conscious of the inferiority of Europe’,18 he scribbled in his diary. Rolland took down excerpts19 from Tagore’s interview on ‘Race Unity’ in Christian Science Monitor —ideas which were so dear to Rolland’s own.20 Condemning the modern civilization for its dissociation of intelligence and emotion, Tagore had called it a major period of transition in history. In all great movements, there was action and reaction. The war was only its negative side, an expression of resistance. It was a confused dawn, thought Tagore, from which would emerge unity, peace and light.21

Three years later, Rolland would dash off a letter to Tagore written on 10 April 1919 in faraway Santiniketan in India, requesting him to sign the Declaration of the Independence of Mind . He wrote:
A number of free minds which feel the urgency to react against the nearly universal oppression and servitude of intellect have drawn up the project of the Declaration of Independence of the spirit. I enclose here a copy. Would you honour us by joining this project? It seems to me that our ideas are in harmony with yours.

…I shall be personally obliged to you if you can mobilize a few personalities from India, Japan and China. I wish that henceforth the intellect of Asia will take a more active part in the expression of European thought. It is my dream to see the union of these two hemispheres of the mind. I admire you for contributing to it more than anyone else. Allow me to say in conclusion how dear to us are your wisdom and your art.

Just a few days back, after the Jallianwalla Bagh genocide on 13 April 1919 (a day before, Tagore had written to Gandhi expressing concern about the Martial Law to suppress defenseless people),22 he had sent C.F. Andrews to Punjab, but the latter was not permitted entry.23 Tagore had also failed to mobilize support for a protest meeting in Kolkata (28 May 1919).24 A shattered poet showed the world that he had no intention to live in an ivory tower, and renounced the knighthood25 conferred on him by the British. Earlier, probably still very bitter about the recent episode, Tagore immediately responded to Rolland’s plea with deep empathy on 24 June. He wrote:
When my mind was steeped in the gloom of the thought that the lesson of the late war had been lost and that the people were trying to perpetuate their hatred, anger and greed into the same organized menace for the world which threatened themselves with disaster, your letter came and cheered me with its message of hope.

These are excerpts from Bridging East and West: Rabindranath Tagore and Romain Rolland Correspondence (1919-1940), edited and annotated by Chinmoy Guha and published by Oxford University Press, 2019. Republished here with permission from the publisher.