Written by Abhivyakti Banerjee | Published on: December 27, 2018
Mumbai: Chhattisgarh, which ranks high on women’s employment indicators, elected 13 women legislators in the recent state assembly elections, up from 10 in 2013. The other four states that went to the polls--Madhya Pradesh, Mizoram, Rajasthan and Telangana--elected fewer women, according to an analysis of election data by IndiaSpend. 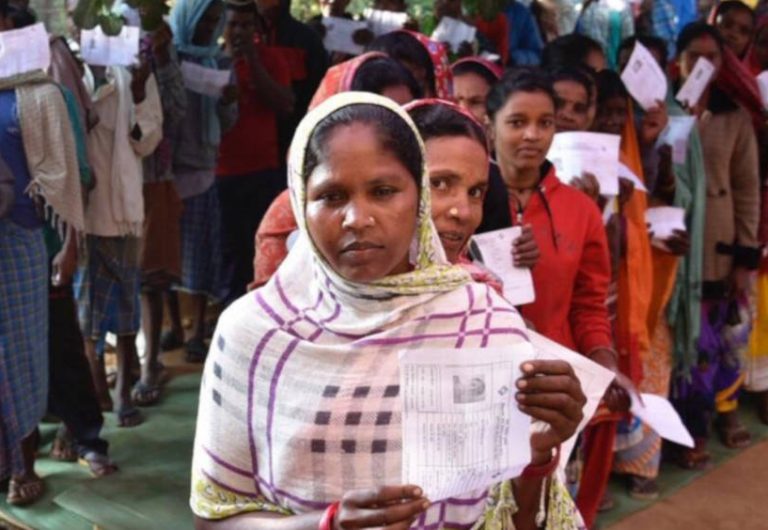 Konta: Voters queue up outside a polling booth in Chhattisgarh on Nov 12, 2018.

Chhattisgarh: was called a ‘backward’ state by Niti Aayog CEO Amitabh Kant in an address at Jamia Millia Islamia University in April 2018. However, the state ranks the highest in the country on women’s employment indicators such as the worker-population ratio (WPR), which shows the number of persons employed per 1,000 persons. It is the first state where the Election Commission of India set up five all-women 'sangwari' polling booths.
Note: Data for 2015-16. *Per capita income data are for 2016-17. The lowest score on an indicator is marked in red.
Source: National Family Health Survey 2015-16, Fifth Annual Employment Unemployment Survey

A state with 19,399 more women than men has only ever had two women ministers in the last 31 years--Lalhlimpui Hmar in 1987 and Lalawmpuii Chawngthu in 2014 (by-elections).

Mizoram also scores the highest (96%) of the five states on women empowerment indicators such as autonomy in domestic decisions.

There is no easy correlation between women’s empowerment indicators and female representation in the assembly.

Madhya Pradesh: The number of women legislators in Madhya Pradesh decreased from 29 in 2013 to 21 in 2018. The state presented the lowest numbers in women's employment (WPR 15.9%) and women’s empowerment indicators such as say in decision-making, ownership of assets and individual agency. The state also recorded the lowest per capita income (Rs 74,590) among the five states.

The state records the lowest female literacy rate (56.5%) and ranks last in the list of women who have completed 10-11 years of education, as IndiaSpend reported on December 5, 2018. Its  numbers for women's employment are considerably low (WPR 18.8%).

Telangana: The young state which has only been to the polls twice elected six women MLAs (5%) to its 119 seat assembly, lower than the 2014 elections in which nine women MLAs were elected.

Legacy proved influential
Legacy played a key role in these assembly elections. Legacy seats are those that are for long occupied by members of the same political family or those with political connections, or legacy candidates.

In Rajasthan, Madhya Pradesh and Chhattisgarh, there were 67 legacy candidates, according to an analysis published by Indian Express on December 7,2018.

Of the 13 women MLAs elected in Chhattisgarh, five women were legacy candidates.

"There is a shared belief in parties that women will not be able to contest as strongly as men and hence parties refuse to give independent women candidates a ticket,” Praveen Rai, a political analyst at the Centre for the Study of Developing Societies, told IndiaSpend. Women who have served in the party for a long time and/or have their own support base are given a ticket.

Quotas would help
Since there is no mandate for political parties to set aside seats for women contestants--as is the case at the panchayat level, where at least 33% of the seats are reserved for women--parties are partial to male candidates.

A study of the results from panchayat elections showed that quotas at that level enable more women to contest for higher-level positions in state legislatures and national parliament. Constituencies that are exposed to an average of 3.4 years of gender quotas at the local level had an additional 38.75 female candidates running for parliament--an increase of 35% between 1991 and 2009, the study published in January 2018 by the IZA Institute of Labor Economics said.

For state assemblies, an additional 67.8 female candidates ran for office in constituencies with an average exposure of 2.8 years of quotas, IndiaSpend reported on June 30, 2018, based on the article.

"One should make it mandatory [or] legislate for political parties to nominate/give tickets to a fixed number of female candidates," Sanjay Kumar, director at the Centre for the Study of Developing Societies, said.

(Abhivyakti Banerjee, a Master’s student of Political Science at M.S.U., Vadodara, is an intern at IndiaSpend.)