Written by Sandeep Pandey, Babloo Loitongbam, Meera Sanghamitra | Published on: November 5, 2019
Thuingaleng Muivah, the supreme leader of the National Socialist Council of Nagalim (Isak-Muivah) [NSCN (IM)] says that Nagaland may be weaker in material sense but it is strong in politics. No wonder, the organisation which started off as an insurgent group was able to engage the Government of India in a process of dialogue for 22 long years after a ceasefire agreement in 1997, now as a parallel government of which Muivah is the Ato Kilonser or Prime Minister. 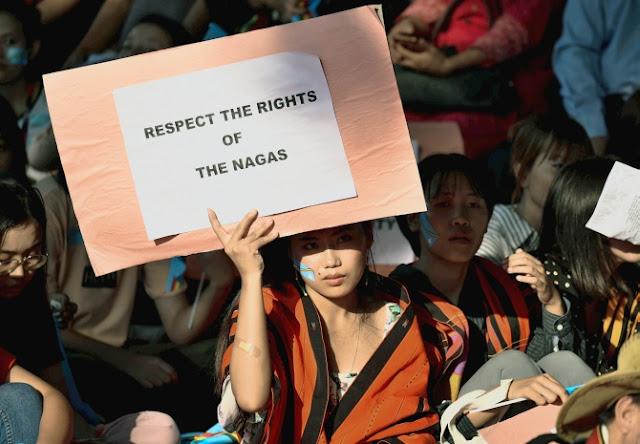 Even after the aspirations of people of Jammu and Kashmir (J&K) of maintaining a certain degree of autonomy with a separate Constitution and a flag have been quashed by the Narendra Modi government by its decision on August 5, 2019, Muivah continues to keep alive his vision for a shared sovereignty and enduring relationship of peaceful co-existence with India, inked in the framework agreement signed on August 3, 2015 in the presence of Narendra Modi.
He has good reasons to be hopeful. Unlike J&K no instrument of accession was signed by then popular Naga rebel leader Angami Zapu Phizo with the Government of India. Nagaland was first made part of Assam by British and then by independent India by brute force. Nagas resisted both times and there was much violence from all sides. But Nagas never surrendered and believe that the ongoing dialogue will result in a political solution.

Muivah asserts that Nagaland has never been under any foreign rule either by consent or by conquest. Nagas had told the British that they should not be left to the mercy of independent India, a sentiment that Dr BR Ambedkar had interestingly expressed related to the Dalits, at the time of India’s independence.

Jawaharlal Nehru sent Army into Nagaland, against the wishes of Mahatma Gandhi, which faced resistance by Nagas armed initially with only bows, arrows, spears and some rifles left behind by the receding Japanese forces during World War II. According to Muivah, Nehru never respected the Nagas as human beings.

It was much later when PV Narsimha Rao met with Isak and Muivah in Paris, he agreed that dialogue would be held without any pre-condition, at the highest level of PM and outside India. He also acknowledged the unique history of Nagas. Subsequently, Indian PM Deve Gowda met Isak and Muivah in Bangkok. He wanted Nagas to accept the Indian Constitution, which was not agreeable to them and Muivah suggested that the two parties should go their own separate ways.

Two years later the Government of India admitted that Nagas were never formally under Indian rule and a unique solution to their problem was required. It was only after this that the concept of shared sovereignty was floated. After talks with PM Atal Behari Vajpayee in Amsterdam the NSCN (IM) leadership decided to move back to India and continue the process of dialogue with the Manmohan Singh government.

The Narendra Modi government declared with much fanfare that an agreement had been reached with NSCN (IM) leadership only to encounter the roadblock of demand for a separate Constitution and flag for Nagaland.
Having taken away the Constitution of J&K, which incidentally mentioned that J&K was integral part of India, and its flag as part of the narrative of One Nation, One Constitution, the Bhartiya Janata Party-led government is in a bind with respect to the Naga demand. But Muivah is resolute about the demand for a separate constitution and flag which he describes as core issues.

The response of interlocutor in dialogue process, now Governor of Nagaland, RN Ravi, has been to bring on board another stakeholder since 2017, Naga National Political Groups, a conglomerate of seven organisations. This is an attempt to counterbalance NSCN (IM), which incidentally was the only Naga group with which he signed the framework agreement in 2015.

He should learn from the history that when the government reached an agreement with the Naga People’s Convention leaving out the Naga National Council of Phizo, it didn’t resolve the issue then. If NSCN (IM) is cold shouldered, the chances are that it’ll slip back into insurgency with a good possibility that NSCN (Khaplang), presently dormant in Myanmar, may also get reactivated.

From the J&K experience, even though the government is still not willing to admit its mistake, it should know that imposing any decision against the wishes of people will not help solve any problem. Contrary to government’s claim of total integration of J&K with India, the alienation is now complete.

The J&K kind of solution is untenable. Violence by the state, imposition of the Armed Forces Special Powers Act and counter-violence by the insurgent groups is an unequal terrain, which has been a site for major and incessant human rights violations, as Northeast has a direct experience of it. This is a cost we can ill-afford.

Instead of making a separate constitution and a flag a prestige or ideological issue, it’ll be better if the government concentrated on thrashing out the intricacies of competencies which NSCN (IM) has worked out in detail.

NSCN (IM) envisions a governance structure in the form of a pan-Naga apex tribal body Hoho for a period of six years with representatives from each village and Regional Territorial Councils for Naga areas in Manipur, Assam and Arunachal Pradesh, having realised that it may not be possible to integrate Naga inhabited areas in these three states with present Nagaland into a greater Nagalim.


The J&K kind of solution is untenable. If NSCN (IM) is cold shouldered, the chances are that Nagaland will slip back into insurgency

Already, the Coordination Committee on Manipur Integrity has given a call to people of Manipur to resist a final Naga Accord if it challenges the territorial integrity, economy, cultural practices and administrative setup of Manipur.

The government should not rush into a solution by declaring deadlines to ensnare itself like in J&K but should patiently involve all stakeholders from within and outside the state of Nagaland without marginalizing NSCN (IM) and evolve towards a solution with peaceful dialogue process to the satisfaction of all.
NSCN (IM) must acknowledge that even though it may have been the only force to reckon with in the beginning, there are now others whose sensitivities will have to be kept in mind. For example, Kukis, another tribe, enagaged in fierce tussle with Nagas in Manipur hills are unlikely to accept Naga dominance over their areas. Lammingthang Kipgen, President of an organisation of Thodous, a Kuki community, has expressed his apprehension to the interlocutor for Indo-Kuki talks.

While it is likely that groups within and outside Nagaland are being projected at this time by the government to blunt the edge of NSCN (IM) demands, it is also a fact that societies like Manipur are an ethnically plural society which have withstood the test of time for many millennia.

They are unlikely to acquiesce to any arrangement to part with their resources and polity at the exclusion of other stakeholders in their society. The government and NSCN (IM) must be completely transparent in their approach and must take into confidence all genuine political formations, civil society and ethnic groups co-habiting the geographical area in which a collective polity has evolved over time.

There was a time when Naga leaders were impatient and were willing to go back to Europe leaving the dialogue process open ended and now the Government seems to be in some kind of urgency. The Narendra Modi government would do well to resist the temptation of self-congratulatory preposterous grandeur in deciding the fate of Nagaland without culmination of proper consultations.
In the name of an accord if the fragile ethnic balance of the region, which has a history of violence, is not handled sensitively it can potentially lead to an ethnic implosion.
---
*Sandeep Pandey and Meera Sanghamitra are social-political activists (contact: [email protected], [email protected]), **Babloo Loitongbam is human rights activist from Manipur (contact: [email protected]). Sandeep Pandey and Meera Sanghamitra are grateful for a meeting between the collective leadership of NSCN (IM) with a delegation of 13 members of Indian civil society on September 27, 2019 at Camp Hebron in Nagaland