Modi Bin Tughlaq and the Bifurcation of Kashmir

Written by Amitabh Kumar Das | Published on: August 10, 2019
Once upon a time. There was a Sultan in Delhi. Muhammad bin Tughlaq. After his uncle Ghayasuddin Tughlaq died under mysterious circumstances, Muhammad bin Tughlaq ascended the throne and ruled the Delhi Sultanate. For the uninitiated, Delhi Sultanate preceded the Mughal Empire. Muhammad bin Tughlaq is known in history for his hare-brained schemes. One fine morning, the Sultan decided that the Sultanate capital should be shifted from Delhi to Daultabad! Daulatabad was in the middle of the Sultanate and safe from Mongol raids,the wise Sultan reasoned. No advisor disagreed. Nobody wanted to incur the Sultan’s wrath and be trampled under an elephant’s feet. They all nodded their heads in the national interest! So the poor inhabitants of Delhi were told to immediately leave for Daultabad. There were no radios those days and the Mann Ki Baat was not possible. So the royal Firman was communicated to the Aam Aadmi through dugdugi (drums). 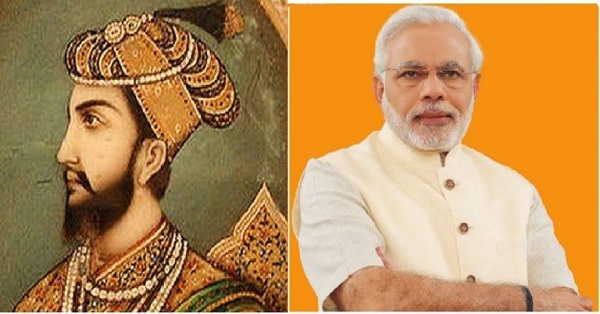 Muhammad bin Tughlaq and Narendra Modi (R) Thousands of people were uprooted. Houses were deserted. A Delhi resident had only one leg. He was not willing to go to Daultabad. But authorities refused to listen to his “lame” excuse! His leg was tied to an elephant’s foot. The elephant was leaving for the new imperial capital. In the national interest, the elephant began to drag the poor man to Daultabad. However, when the elephant reached Daultabad, only the poor man ‘s leg was found. The man himself was lost en route.

After living in Daultabad for a few days, the Sultan had second thoughts. He grew homesick for Delhi. So, residents were ordered to go back to Delhi bag and baggage. Again, hundreds perished. The Sultan cared little. He ate grapes off gold plates, watched mujra and planned for his next schemes. I was a student when I read all this in my history books and I wondered how a ruler could be so crazy and how nobody protested against a half-witted Sultan.

Fast forward to 2019. Hindustan is ruled by a tea-seller turned Prime Minister. A pure vegetarian, he allegedly engineered bloody Gujarat riots. He talks “Sabka Saath, Sabka Vikas” but doesn’t allow his wife Jashodaben to enter the PM House. A self-proclaimed fakir, he wears a suit that costs only Rs one million! He is fond of stylish clothes. Some people call him “Paridhaan Mantri” instead of “Pradhan Mantri”. And his schemes are as grandiose as Muhammad bin Tughlaq’s. I call him Modi bin Tughlaq.

According to the great Karl Marx, history repeats itself. First as a tragedy. Then as a farce. Modi bin Tughlaq is repeating history both as a tragedy and a farce. One fine morning, he bifurcated the state of Jammu and Kashmir! J&K became a Union Territory and Ladakh also turned into a UT. Curfew was clamped in the Valley before the royal Firman. As Hindu fanatics rejoiced, I was crestfallen.

As an IPS officer, I have served in J&K for months. I have patrolled Srinagar streets with an AK 47 in my hands and a bullet proof jacket on my body. I have spent nights in bunkers along the LoC (Line of Control) amidst Pakistani shellings. I have done security duty during the Amarnath Yatra. I have patrolled the Dal Lake in a BSF boat. And I have received so much affection and love from average peace-loving Kashmiris. I have sipped “kahwa” in their wooden houses. I have tasted heavenly “waazwaan” (an assortment of meat dishes). These Kashmiris are so simple hearted. They have been ruined by decades of militancy.

Tourism, the backbone of Kashmiri economy, is in ruins. No honeymooners now come to their romantic houseboats. When Kashmir needed a healing touch, Modi bin Tughlaq cut the state in two parts! I am sad beyond words. Kashmir has been an integral part of India for hundreds of years. It will remain an Indian territory for thousands of years to come. But why rub salt into Kashmir’s wounds? Kashmir is under curfew when Bakrid is round the corner. My only hope lies with the judiciary. When Modi bin Tughlaq banned my favorite Maggi noodles, the court intervened and quashed the ban. Now, I make Maggi noodles in two minutes and the Prime Minister of India can do nothing! Judiciary has shown Modi his place. I hope that the Supreme Court declares the Govt notification bifurcating J&K null and void. Then, Modi bin Tughlaq will bite the dust and I will celebrate the court ruling by watching Sharmila Tagore starrer Kashmir Ki Kali!