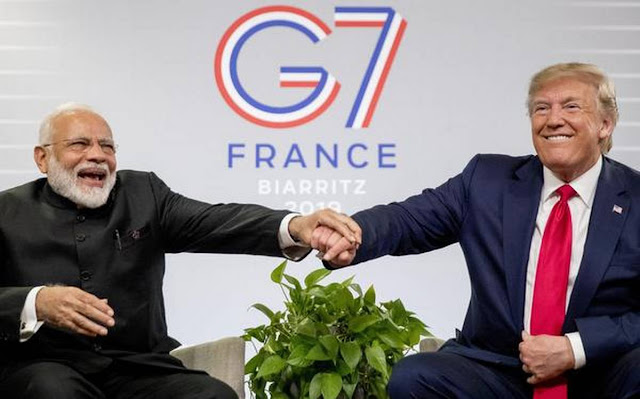 Reason, appears to Levin, who is a member of the House Foreign Affairs Committee and its Subcommittee on Asia, the Pacific and Nonproliferation, is that there is an "increased acceptance of anti-Muslim bigotry" among top world politicians, a phenomenon Modi has allegedly sought to carefully pander, cultivating it ever since his Gujarat days.

In a commentary the 59-year-old Congressman says, he first visited India in 1978 with his father, who was then Assistant Administrator of the US Agency for International Development, and the impact on him was "immediate, overwhelming, and literally life-changing". However, he hastens to add, "The India of Narendra Modi is not the India I fell in love with."

As a graduate student, he became "a religion major with a focus on the Buddhist philosophy of India and Tibet", going back to India "again and again, spending a year in Utter Pradesh during college and a summer in Karnataka and traveling around -- including in Kashmir and Ladakh  -- during graduate school", finding it a "beautiful country where there is so much to experience."

Levin says, "I was struck most of all by its religious pluralism and raucous democratic culture. Hindus, Muslims, Christians, Sikhs, Jains, Buddhists -- different peoples living together under one democracy. Imperfect, to be sure, but still a remarkable example of overwhelmingly peaceful coexistence amidst superrich diversity."

Suggesting that Modi, "a Hindu nationalist", broke this peaceful coexistence and superrich diversity, Levin underlines, this way he has begun speaking "to a broader, global concern"-- "the increased acceptance of anti-Muslim bigotry and the dangers posed by ethnonationalists", putting him in the company of likes of Brazil's Jair Bolsonaro, Israel's Benjamin Netanyahu and USA's Donald Trump.

Indicating that this is in line with Modi's past as Gujarat chief minister, Levin believes, Modi's latest move, of stripping "Muslim-majority Kashmir of the privileged status it has held under India’s constitution for 70 years", while "alarming", does not come "out of left field" either.

Modi "may have broken Indian law" and "trampled democratic norms and fundamental human rights", heightening the "long-simmering tensions between India and Pakistan, both nuclear-armed powers", but Levin seeks to argue, already, the 2005 Bush administration move to deny Modi entry into the US "on account of failure, as chief minister of the state of Gujarat, to intervene during a 2002 outbreak of horrific violence against Muslims, appears to have been forgotten.

Pointing out that "Modi’s record on violence against Muslims hasn’t improved with time", the US Congressman recalls a "New York Times" report, which noted, that Modi has not offered any "consolation to the state’s Muslims and expressed satisfaction with his government’s performance." Modi's only regret, he said, was that "he did not handle the news media better.”

In fact, says Levin, "Earlier this year, the Human Rights Watch (HRW) published a report detailing “a violent vigilante campaign against beef consumption and those deemed linked to it” in India, where many Hindus consider the cow sacred."

Pointing out that "nearly 50 people, mostly Muslims, were killed as part of this campaign between May 2015 and December 2018", with Modi’s BJP having failed to "help matters", Levin quotes HRW as further stating that “police often stalled prosecutions of the attackers, while several BJP politicians publicly justified the attacks.”

Says the Congressman, "Perpetrators are so secure in their belief that they’ll face no consequences that they post videos of beatings on social media. Sadly, their certainty has proven justified", adding, "All of this brings us to this month, when Modi revoked Article 370 of India’s constitution that granted Kashmir its autonomy."

Claiming that this has "plunged the region into darkness, blocking the Internet and telecommunications and imposing a strict curfew", Levin says, while Modi's government "claims that everything in Kashmir is returning to normal, recent reporting and video show an ongoing lockdown, thousands of people imprisoned, official violence against civilians, and growing unrest."

The Congressman insists, "The United States must make clear that these actions are not befitting of the world’s largest democracy -- not only because it is the right thing to do but because, if we don’t, what will we allow to happen next? We are learning the hard way what happens when America doesn’t lead on the global stage to protect human rights and democracy."

However, Levin apprehends, things might only go in Modi's favour worldwide, as his "second term has only just begun." All the world leaders who take a line similar to Modi appear to be consolidating, he suggests.

Thus, "Brazil’s right-wing leader, Jair Bolsonaro, is trampling indigenous rights as he allows frightening amounts of the Amazon rainforest to go up in flames. Next month, Israel will decide whether to give another term as prime minister to Netanyahu, who’s promised to annex Jewish settlements in the West Bank, further jeopardizing the decades-long hope for a peaceful, two-state solution that respects the rights and dignity of the Israeli and Palestinian people."

Yet, he warns, "And all of this plays out under the spectre of an American president who has stoked bigotry and violence in our own nation and globally, preferring the company of dictators and human rights violators to democrats and allies."

Levin wonder, "Donald Trump’s nightmarish presidency has forced us, as Americans, to consider what kind of country we want to be. Do we want to mimic those who ignore the human dignity of people not like them and prey on the most vulnerable?"

Also wondering whether the US would "stand up for liberty and justice for all", Levin says, "It should not be a tough decision, but it will take courage -- courage to call not just on our adversaries, but on our allies and ourselves, to live up to democracy’s ideals."

Levin believes, "We must not let actions like those taken by India become a global trend, even as our President fans the flames and shuns the very ideals of multilateralism and collaboration", underlining, "The United States House of Representatives must stand up for human rights in Kashmir and around the world, ideally on a bipartisan basis, and with the Senate at our side. That is what I came to Congress to do."