August 12, 2019 was the great festival of Eid al-Adha (incidentally, for Jews, Christians and Muslims – the sacrifice of Abraham is a very significant one); for the people of Kashmir however, this year Eid was a sad day indeed, what with the lockdown and communications blockade! 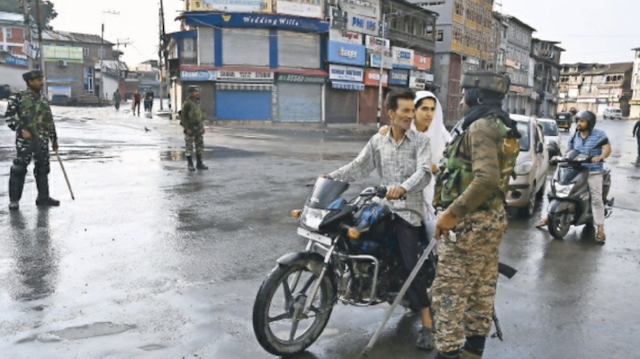 Exactly a week earlier on August 5, Kashmir was kayoed in a swift, unethical and undemocratic way. That day will surely rank as one of the blackest days in the country’s history – if not the blackest! In a blatantly unconstitutional and anti-people act, the BJP-led NDA Government abrogated Article 370 of the Constitution. The manner in which was done was autocratic and an onslaught on democracy.

The draconian and secretive manner in which the government pushed a sensitive bill, steam-rolling all opposition, without consulting Parliament, without taking the people of Kashmir into confidence – is clear betrayal of the values embedded in the hearts and minds of most Indians.

The Constituent Assembly of J&K ceased functioning in 1957, the Supreme Court in its judgement in SBI vs Santosh Gupta (2017) held that the Article 370 has become permanent unless another Constituent Assembly of J&K was constituted. In order to get over this constitutional roadblock, the present regime in New Delhi adopted a devious and unconstitutional route.

On August 5, in a devious manner, the BJP-led government introduced a three-step amendment process. In the first step a Presidential Notification under Article 370 (1)(d) was issued amending Article 367 by introducing a new Sub-clause (4) which stated that the expression ‘Constituent Assembly’ in Article 370(3) shall be read as ‘Legislative Assembly of the State’.

The effect was that after this change, Article 370 of the Constitution could be amended removing the necessity to obtain the recommendation of the Constituent Assembly. This is in fact, completely violative of the spirit and the letter of the Constitutional provisions. Besides, adding insult to injury J&K was downgraded to a Union Territory from a state -- something unheard of and absolutely humiliating!

For almost a week before August 5 the government was on an over-kill: with surreptitious yet strategic acts ensuring a build- up, which kept the nation wondering but at the same time the people of Kashmir were kept on tenterhooks and in utter darkness.

There was a massive upscaling in deployment of military forces, random frisking of people, the imposition of indefinite curfew, the arrests of former Chief Ministers Mehbooba Mufti and Omar Abdullah and other key Kashmiri leaders were arrested; a round the clock curfew with a complete black out in communications, the suspension of civil activity, the sudden evacuation of all tourists and particularly pilgrims to Amarnath, in an attempt to terrorise citizens and bulldoze the aspirations of the people of the state.

Ever since the unconstitutional abrogation of Article 370 the people of Kashmir are still being denied the rights and freedom which are legitimately theirs.

The abrogation of Article 370 has always been part of the DNA of the Sangh Parivar. The BJP election manifesto clearly highlights it – and to their ‘bhakts’ they have made good their promise. Several of them are jubilant and celebrating with unabashed adulation – just as the crowds did for Hitler when he began purging the Jews, the Catholics, the intellectuals, the liberals.

There are however several unanswered questions, which even the most ardent of ‘bhakts’ are unable to answer, on this heinous deed:
The BJP and their ilk know that what they have done is wrong, totally unacceptable by anyone, who has a little common sense, who has some degree of objectivity and sensitivity to the larger issues, concerning India and the whole sub-continent.

Several intellectuals and other eminent citizens of the country have taken umbrage on the abrogation of Article 370 and the way it has been done. Editorials and op-eds not only from India but from all over the world, have unequivocally condemned this draconian act of the Government and the fact that it will greatly affect the peace and stability of the region.


Petitions against abrogation of Article 370, media blackout: At this moment, the Supreme Court does not seem to be in a hurry to take up these matters

‘The Telegraph’, of Calcutta, which is well-known for its front-page headlines critical of the Modi regime, likened the August 5 decision, to ‘the Partition’ in big, bold letters. In a hard-hitting article ‘The Ultimate Goal Is a Hindu Rashtra and It Is Now Within Sight’, Sidharth Bhatia, the founding editor of ‘The Wire’, argues that the Sangh Parivar’s dreams are close to being fulfilled and scores of Indians are cheering it on.

Whereas ‘Mumbai Mirror’ (from the Times of India Group) had a strong headline ‘Cloak and dagger that pierced Kashmir’s heart’ reflected its paper’s view on both the decision itself and how it was carried out, without consultation, and while blacking out any news or dissent from the Kashmir Valley.

Pratap Bhanu Menta, the well-known intellectual, in an op-ed in the ‘Indian Express’ (August 6, 2019) entitled, ‘The story of Indian democracy written in blood and betrayal’, writes:

“There are times in the history of a republic when it reduces itself to a jackboot. Nothing more and nothing less. We are witnessing that moment in Kashmir. But this moment is also a dry run for the political desecration that may follow in the rest of India. The way the BJP government has changed the status of Jammu and Kashmir by rendering Article 370 ineffective and bifurcating the state is revealing its true character.

UN Human Rights Council (UNHRC) states, “The fact that hardly any information is currently coming out from the region is of great concern.”

Its spokesperson pointed to the UNHRC’s July 8 report on the human rights conditions in Kashmir, which documented how authorities in India have “repeatedly blocked telecommunications networks to muzzle dissent, used arbitrary detention to punish political dissidents and employed excessive force when dealing with protestors leading to extrajudicial killings and serious injuries;” adding that the latest restrictions “will exacerbate the human rights situation in the region.”

‘The Guardian’ the well-respected news media from the United Kingdom minced no words in an editorial (August 6, 2019) saying:

“Yet the revocation and decision to split the state in two – creating two centrally administered territories in its place – is shocking and perilous.

Several legal experts believe it unconstitutional too. Its abrupt and ruthless manner, with the house arrest of well-known politicians, imposition of a curfew and blackout of the internet and phone lines, will likely lead to protests and inflame the resentment which has underpinned an insurgency which has cost tens of thousands of lives”.

Several national, non-partisan and secular organisations like the Peoples Union for Civil Liberties (PUCL), and the National Alliance of People’s Movements (NAPM) have issued very strong statements condemning the abrogation of Article 370.

Anuradha Bhasin, the executive editor of the ‘Kashmir Times’ has filed a writ petition on August 10, in the Supreme Court seeking directions to ensure that the State creates an enabling environment for journalists and all other media personnel in all parts of Jammu and Kashmir to practise their profession.

The petition has demanded that the debilitating restrictions imposed through the complete shutdown on internet and telecommunication services, and severe curbs on the movement of photo-journalists and reporters be immediately relaxed in order to ensure the freedom of the press and media.

Besides, a couple of other petitions have already been filed in the Supreme Court challenging the abrogation of Article 370. At this moment, the Supreme Court does not seem to be in a hurry to take up these matters!

Asiya Syed, is a young Kashmiri currently doing her undergraduate studies in Bombay University. Her parents and relatives live in Kashmir – she has absolutely no communication with them these past days. Asiya is not afraid -- she is visible, she is vocal -- passionately espoused to the idea and the cause she believes in “I will speak up, no matter what, and I will not keep my identity hidden even if they kill me”. She goes on to add, “Your million forces and communication blockade will not kill an idea!”

Asiya represents that idea of a free, pluralistic, dignified, sensitive India. We the people, should have the courage to unequivocally condemn the bloody betrayal of a people by standing up for Asiya and the Kashmiris now!
---
*Human rights and peace activist/writer, recipient of several international and national honours for his work for human rights, justice, reconciliation and peace. Contact: [email protected]