On 6-7 August 2019, a fact-finding team comprising activists, academics, researchers and lawyers visited a few Pathalgadi villages in Khunti district (Ghaghara, Bhandra and Habuidih in Khunti block and Kochang and Birbanki in Arki block) to understand the Adivasis’ motivation for doing Pathalgadi and the response of the administration. The team met several residents of these and neighbouring villages and also the deputy commissioner (DC) of the district. The fact-finding inquiry was facilitated by Jharkhand Janadhikar Mahasabha (JJM), a network of several people’s organisations and activists. Several organisations such as Adivasi Adhikar Manch, AIPWA, HRLN, Jharkhand Munda Sabha and WSS participated in it. 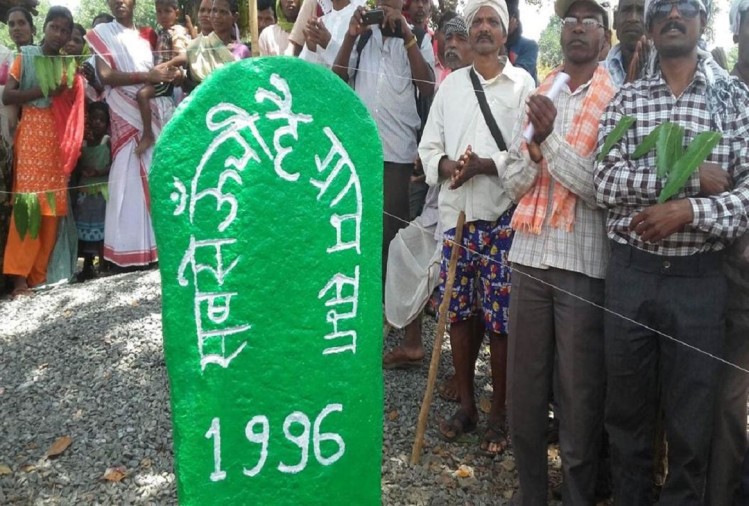 Pathalgadi is a traditional practice of Munda Adivasis of erecting stone slabs (pathals) in honour of their ancestors, to announce important decisions regarding their families and villages or to simply mark the boundary of their villages. Since 2017, pathals painted with Constitutional provisions for Adivasis, judicial orders and their interpretations have been erected in several villages of Jharkhand. The villagers read these provisions and orders to mean the following – 1) the supremacy of the powers of the traditional Gram Sabha and the traditional Adivasi governance systems, 2) the rights of Adivasis over land, 3) the restricted rights of non-adivasis and outsiders in the scheduled areas to settle down and work and 4) that Adivasis are the original inhabitants and owners of India. 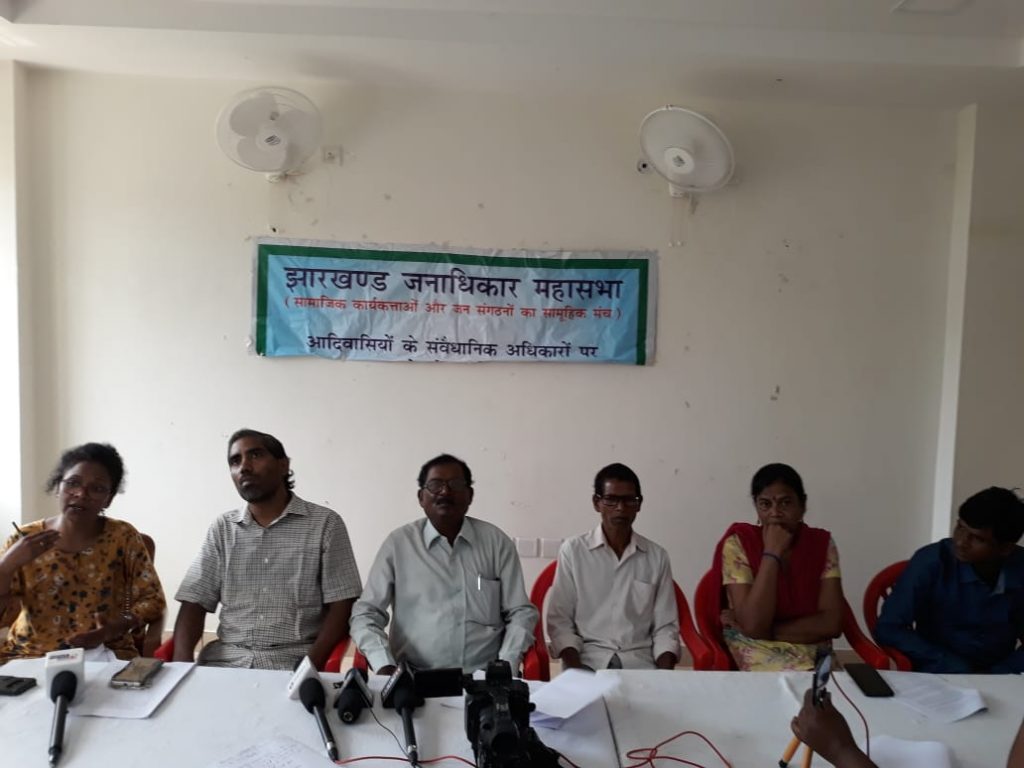 The fact-finding team (report attached) found that Pathalgadi to be a non-violent response to specific policies of the government; primarily its attempts to dilute land laws, failure to respect the worldview of the Adivasis, implementing schemes without the consent of the Gram Sabha, non-implementation of PESA and provisions for the fifth scheduled areas and rampant violations of human rights violations. While most of the interpretations of the Constitutional clauses written on the pathals may be wrong or far-fetched, they are based on valid issues and demands of Adivasis and their basic idea about the supremacy of the Gram Sabha.

The immediate trigger for Pathalgadi was the state government’s repeated attempts to amend the Chhotanagpur Tenancy Act to ease acquisition of Adivasi land. The state government also did not allow Adivasis to protest against this move, by forcefully preventing their entry into Ranchi for a demonstration in 2016. The police also fired at the crowd, which resulted in the death of one person from Khunti. There are also apprehensions that the recently auctioned Parasi gold mines in the neighbouring block of Tamar will lead to acquisition of people’s land in Khunti for construction of roads and other infrastructure related to the mines. The people firmly said that nature (including land) is an integral part of the Adivasis’ religion and governance system. According to the DC, however, acquisition of land is essential for development projects.

There is also anger against the constant attack on Adivasis’ right to self-governance. Gram Sabha is not consulted before implementing projects in Adivasi-dominated areas. Several residents of Pathalgadi villages have publically rejected Aadhaar as they are apprehensive that Aadhaar will ease exploitation of Adivasis and their resources by outsiders, as the unique identification system equates Adivasis with the ‘aam aadmi’ (common man). Many people in the visited villages did not vote in the recent Lok Sabha elections as they feel that their Gram Sabha and Gram Pradhans are the primary governance entities. Anger against the government’s policies also played a role.

The team found that the state responded to Pathalgadi with severe repression and violence. A day after the Pathalgadi ceremony in Ghaghara on 26 June 2018, thousands of police personnel lathi charged at the people. Several people were beaten up with sticks, including the elderly, women and children. One deaf man was beaten as he was unable to hear the instructions given by the police. One woman was stripped and beaten by the mahila police and was unable to move for a week. A pregnant woman, Ashrita Munda, was at home when the police came into her house and beat her with a stick. She delivered a physically disabled baby. The police vandalised houses, vehicles and livestock.

It addition to using tear gas, the police also fired at the people. Two people were shot at. One of them, Birsa Munda, died at the spot. Many people ran away from their villages for several months and as a result, also missed the sowing season. The DC denied all the violence unleashed by the police. The violence was not restricted to Ghaghara. People were also beaten in the villages of Uduburu and Jikilata. Several houses were ransacked by the police in ‘kurki jabti’ (impoundment). In Totkara, the police let their dog loose on the people. The dogs badly bit a 25-year woman, Mariam Soy.

Due to this violence, there is immense fear amongst people. The police has continued its visits to the villages and picking up of villagers at random or raiding their homes. According to 15 FIRs, available with the factfinding team, (attached) analysed by lawyers associated with the team, the police has charged about 100-150 persons and 14000 unnamed people under several charges that include abetment, obstruction to public servants while discharging their duty, creation of public nuisance, criminal intimidation and even sedition. It also includes 20 people, including activists, writers and journalists, who have been charged with sedition only because they had raised questions, on social media, on the government’s actions in Pathalgadi villages and attack on Adivasi rights.

A total of 29 FIRs have been filed against people of pathalgadi villages. There is an apprehension that these FIRs may have charged all the Gram Pradhans of the pathalgadi villages and about 30,000 unnamed people under various charges, including sedition. The villagers get scared whenever the police visits their village, because any of them could be considered as one of the ‘unknown others’ in the FIRs. There were reports of more arrests in Ghaghara as recently as this month. Many people named in the FIRs or picked up by police were not even aware of the charges against them.

The police has forcefully set up camps in schools and community buildings without the consent of Gram Sabhas in many Adivasi villages. The team found that government schools in Kochang and Kurunga were merged with faraway schools and their building was converted into police camps. The local administration even forged a resolution of the Kochang Gram Sabha to show consent to acquisition of a land for setting up a permanent police camp in the village. The Gram Pradhan of Kochang, Sukhram Soy, who opposed it fiercely was murdered a few months ago. The villagers alleged lack of adequate action and investigation by police in this matter.

It is likely that the situation is similar in several other Pathalgadi villages of Khunti district. Jharkhand Janadhikar Mahasabha is deeply concerned with the silence of political leaders on the violations of Adivasi rights in Pathalgadi villages. It appeals to all opposition parties to stand with the Adivasis of Khunti and seek accountability from the state government. Based on its findings, the fact-finding team, and the Mahasabha demand the following from the government:

• The government must immediately withdraw all FIRs and charges of sedition on the thousands of unnamed residents of Khunti and activists. It must also undertake judicial inquiry into the charges framed against the named people in the FIRs within a stipulated timeframe. It must make public all the evidence that formed the basis for these FIRs and the evidence collected in all related inquiries since then.

• The government should undertake judicial inquiry into the violence unleashed by security forces in Ghaghra and other villages and ensure punitive action against the personnel responsible for the human rights abuses. It must also ensure compensation to victims of police atrocities in these villages.

• The government must remove all police camps from the nine schools and two community buildings in Adrki, Kochang, Kurunga Birbanki, Kitahatu, Kewra and Hut.

• The government should initiate genuine dialogue with representatives of the Pathalgadi villages, Adivasi organisations and experts on the interpretation of Constitutional provisions written on the pathals.

• The government must ensure strict immediate implementation of all provisions for the fifth scheduled areas and PESA.