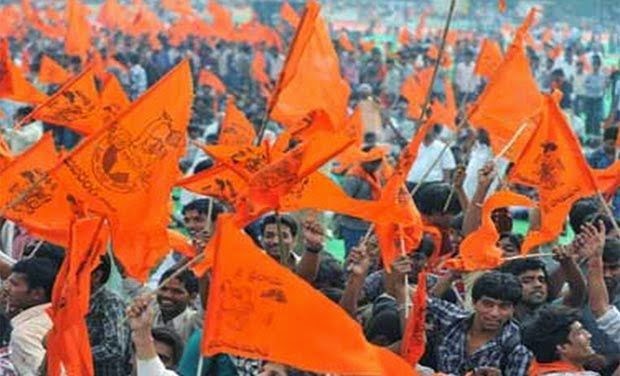 Representational Image
In the imagination of Hindutvadis, the change in the constitutional status of Jammu and Kashmir has become synonymous with a Hindu victory and conquest. For them, the Muslim population of the state, which is due to become a Union Territory on October 31, has been defeated after waging a decades-long battle of attrition against the Indian state. The Hindutvadis, therefore, can now impose their will on the vanquished people. The Valley, to use that familiar term from history books, has been “annexed.”

These apocalyptic images, typical of the medieval and ancient times, continue to emerge from the world of Twitterati, which echoed with spontaneous celebrations at the reading down of Article 370 on August 5. There was an incessant chatter about the abrogation of Article 35A, which debarred Indians from outside Jammu and Kashmir to buy property there. The Twitterati perceived the annulment of Article 35A as a decisive move to efface Kashmir’s identity.

This was precisely why Twitter posts on acquiring land cheap in the Valley started doing the rounds. There were memes stating the price per square yard of land in the Valley. These posts presumed that the conquered relinquish their right to determine at what rates they can sell their property. They, after all, will be at the conqueror’s mercy, as was the norm centuries ago.

The Twitterati’s perception seemed chillingly true because it matched the ground reality. Thousands and thousands of boots stomped the streets in the Valley, its people locked inside their homes, their silence construed as their acquiescence in the conquest. Though his intention may have been noble, the video of National Security Advisor Ajit Doval having lunch with a handful of Kashmiris was transmuted into a metaphor of Kashmir’s subjugation. It now seems some Kashmiris were tricked into having lunch with Doval. Hindutvadis rejoiced and shared the video of Doval’s luncheon in the Valley.

People interpret meanings of any action according to their own worldview. The Eid ul-Adha festival was long marked on the calendar for August 12, yet the Narendra Modi government announced the change in Kashmir’s status on August 5. Perhaps the timing was determined because Parliament was in session and the government required its approval. Perhaps Prime Minister Modi needed to trumpet the integration of Kashmir into India from the Red Fort on August 15 (India’s Independence Day).

The sentiments of the conquered, history tells us, are subordinated to the conqueror’s compulsions. Eid ul-Adha became a footnote in India’s script for Kashmir. That is why Kashmiris will consider the sudden change in their status as a consequence of their territory being symbolically and legally annexed. Their feelings will be further reinforced, as their sorrow is directly proportionate to the happiness that Hindutva hotheads are displaying.

As Kashmiris mourned or countenanced their fate in silence, social media was agog with posts from Hindu netizens rejoicing at their chance of marrying fair-complexioned girls of the Valley. Even Bharatiya Janata Party leaders spoke of the new stock of women available in the matrimonial market. Some posts seemed to even justify the rape of Kashmiri women. Commentators dubbed these remarks as misogynist, which it is indeed.

This form of misogyny, in the context of Kashmir, is linked to the collective memory of what is typically considered the conqueror’s behaviour. The conquering army pillages, appropriates land and abducts women. The rights of the conquered cease to exist. Women are subjugated and enslaved. Their body, as their land, becomes the site to establish domination.

In the imagination of Hindutvadis, therefore, Kashmiri women no longer have the agency to turn them down. They, after all, inhabit the land which has been conquered and annexed – and integrated into India. All these have been achieved against their wishes, in contrast to the tendencies in the Valley to break away from India.

Conquests often lead to a breakdown of modes of social conduct. This is because the generally accepted norms of morality cease to exist. It is the conqueror who defines morality.

Obviously, the code of morality hasn’t collapsed in Kashmir. Yet, worryingly, Kashmir has been conquered in the Hindutvadi’s imagination, inspiring him to believe that he has the unfettered right to the land and its women there.

The emphasis on “fair-complexion” in the misogynist posts pertaining to Kashmiri women reflects the inferiority complex of Hindutvadis. Indians have always been conflicted about their dark skin. Families celebrate the birth of fair-complexioned children, particularly girls. It is thought easier to get a match for girls who are fair. No wonder, matrimonial advertisements invariably describe nubile girls seeking grooms as fair or wheatish.

This sense of inferiority has been sublimated in the fantasy of Hindutvadis, who believe they have conquered and annexed Kashmir, where the women are perceived as fair and beautiful. They had earlier presumed that the colour of their skin would have fair-complexioned women, whether in Kashmir or elsewhere, deny them their affection.

The Hindutvadi’s inferiority arising from his complexion has been neutralised because he is now in his imagination the conqueror of Kashmir.

Those harbouring the infantile wish to have fair-complexioned Kashmiris as partners have been bitterly opposed to love jihad, a term invoked to doubt the love of Muslim men for Hindu women. The love of Muslim man is seen as a ruse to convert the Hindu woman to Islam. The fair-complexioned Kashmiri is also Muslim. Yet her religion isn’t an obstacle as it is implicitly assumed that she would be converted to Hinduism.

Indeed, the anxiety over masculinity has underpinned the movements of the Hindu Right. Writing about the 1920s, when there was a spurt in the Hindu-Muslims riots in Uttar Pradesh, Charu Gupta writes in Sexuality, Obscenity, Community: Women, Muslims, and the Hindu public in Colonial India: “These movements constructed Hindu masculinity as a contrast to the colonial image of the emasculated, effeminate and militarily incompetent Hindu male. For militant Hindu organisations, a show of physical strength was their psychological defence, their reply to the images of the powerful, rational British and the lustful Muslim.”

The stereotype of “lustful Muslim” men was propagated through pamphlets and newspaper stories reporting incidents in which they were accused of abducting Hindu women, marrying and converting them to Islam.

Gupta provides a list of these incidents in Uttar Pradesh, pointing out that the word “alleged” was tendentiously deleted from media reports. When the authorities denied or clarified what had actually transpired in the reported cases of abduction, these were buried in the inside pages. Some cases may have been true. But even instances of elopement of Hindu women with Muslim men, undertaken out of love, were depicted as abduction. It perpetuated the myth of Muslim men’s wanton behaviour towards Hindu women, who had been anyway portrayed as helpless victims of Muslim conquerors in the British colonial historiography. “Hindu masculinity had to be built in opposition to the 'other' [the Muslim],” writes Gupta. But Hindu masculinity could not become a carbon copy of Muslim masculinity, although Hindutva ideologue VD Savarkar in his writings did advocate such a course. Savarkar was openly disapproving of the Maratha rulers who conquered Muslim territory but did not abduct and rape Muslim women.

The Hindu Right’s strategy, according to Gupta, was to glorify a “Hindu male who managed to attract the love of a Muslim woman… as the ultimate hero.” He did not abduct; he was irresistibly attractive. Novels were written to extol the ideal Hindu man.

Gupta writes, “The most famous [of these novels] was Shivaji va Roshanara, a supposedly historical story from an unspecified source, embodying the Maratha tradition according to which Shivaji waylaid Roshanara, the daughter of Aurangzeb, and eventually married her, Sambhaji being the issue of this union.”

In the novel, Shivaji is projected as a “handsome specimen of manhood, with a well-built body, fair complexion, and bright eyes. She (Roshanara) slowly falls in love with him.” The novel went on to state that Roshanara preferred being called the queen of a “small king” than being called the emperor’s daughter.

In the posts regarding Kashmiri women, Hindutvadis lack the confidence arising from Shivaji’s physique, as depicted in the novel. Their inferiority has them to construe the change in Kashmir’s status as a Hindu conquest. This has them draw inspiration from history to believe they can take fair-complexioned Kashmiri women as partners.

Indeed, Hindutva has acquired an appeal because it addresses the inferiority of Indian males, their shattered dreams and their fear of the future. All these, in turn, have fanned their anxieties about their masculinity, which they seek to overcome by imagining vengeance against Muslims. The integration of Kashmir into India provided them their priapic delight.

Ajaz Ashraf is a freelance journalist based in Delhi. His novel, The Hour Before Dawn, was published by Harper Collins. Views are personal.