For the powers-that be, surely, it is but natural to consider this a proud moment: That the World Bank’s new “Ease of Doing Business” report has shown India jumping 14 points; and that India is one of the two countries across the globe out of 190 economies analysed among the 10 top “improvers” which have shown climbed so sharply – the other country being the tiny Djibouti in the huge African continent. 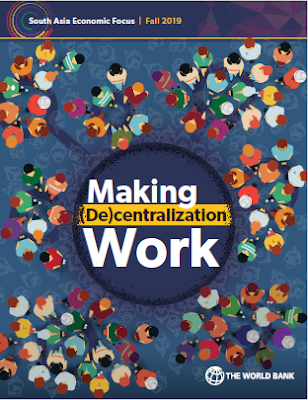 Further, if the report is to be believed, out of total of 11 business regulatory reforms in the past two editions of Doing Business, India made 14 sizeable improvements during 2017-18, while Djibouti improved on 11 counts; and overall, it was important that two economies with “the largest populations, China and India, demonstrated impressive reform agendas.” So far so good. But after reading through the report today, I decided to read another report, also by the World Bank, which I had meticulously downloaded and kept in my computer for a closer perusal on some other day, at leisure. The report is called “South Asia Economic Focus/ Fall 2019: Making Decentralization Work.” I read the 88-page report today.

I wondered as to how, while one World Bank report, released today, and the other, released just a fortnight ago – on October 7, to be precise – are talking in such contrasting terms. Maybe while the new one only focuses only on Delhi and Mumbai (!), the earlier one talks about “severe” cyclic crisis in India, reasons behind drop in the overall drop in growth rate to 5%, and its possible impact.

The October 7 World Bank report “South Asia Economic Focus” section, “What is going on in India?”, starts with a whimper, that “India’s cyclical slowdown is severe”, adding, “Quarterly GDP growth slowed for 5 quarters in a row, declining from a peak of 8.1 percent in the first quarter of 2018 to only 5.0 percent in the second quarter of this year.”

Pointing out that the “growth decelerated by 3 percentage points in the last year and growth in the second quarter of this year was the lowest in over six years”, the South Asia report says, “Manufacturing growth fell from over 10 percent a year ago to below 1 percent in the second quarter of 2019.” It adds, while this drop “follows the global trend”, it is “more pronounced.”

The report underlines, “The slowdown is mostly due to a deceleration in domestic demand. After years of contributing to high growth rates, domestic demand slipped and contributed the most to the disappointing performance in the last quarter. Private consumption and investment both grew slower than overall GDP in the second quarter of this year. Investment grew 4.0 percent (y-o-y) in the second quarter, compared to 13.3 percent a year ago, while private consumption grew 3.1 percent, compared to 7.3 percent a year ago.” 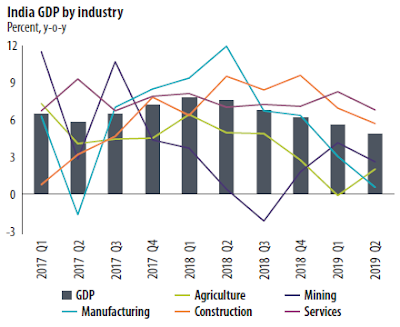 The report believes, “One reason for slowing private consumption is the strong contraction of car sales that started in mid-2018, driven in part by higher insurance premia, new emission norms, uncertainty about GST cuts, and the squeeze in the non-bank financial companies (NBFC) sector.”

“Together”, the report says, “Consumption and investment grew 6.0 percentage points slower than a year ago. In line with weakening domestic demand, import growth fell from 11.0 percent a year ago to only 4.2 percent in the second quarter of this year. With a growth rate of 8.6 percent, government consumption has become the fastest growing expenditure component.”

“In such a weak economic environment”, the report thinks, “Structural issues surface and the weak financial sector is becoming a drag on growth. Despite high economic growth in the last decade, India’s banking system still has a significant level of non-performing assets of close to 10 percent of total assets.”

Insisting that government steps have been inadequate, the report notes, “The introduction of the 2016 bankruptcy code and re-capitalizations of state-owned banks were necessary steps, but not enough to resolve the weakness.”

The report says, though “new regulatory and supervisory efforts from the Reserve Bank of India (RBI) that resulted in greater market discipline, and overall credit growth in the economy picked up again in July”, it warns, “Conditions could deteriorate further if the recent slowdown is not properly addressed and contained”, insisting, “This critical situation demands decisive policy actions.” 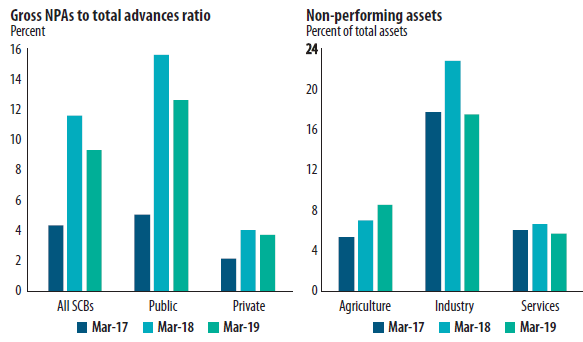 A separate India country brief in the same report says that, recently, while poverty did “decline”, implementation challenges remain high. Pointing towards “weaknesses in the rural economy and a high youth unemployment rate in urban areas may”, it says, these may “have moderated the pace of poverty reduction.”

It particularly underlines, “Disruptions brought about by the introduction of goods and services tax (GST) and demonetization, combined with stress in the rural economy and a high youth unemployment rate in urban areas, may have heightened the risks for the poorest households.”

The report believes, apart from other issues, “Broad-based poverty reduction remains a major challenge, in particular with respect to (i) presently excluded groups (such as women and scheduled tribes), and (ii) extending gains to a broader range of human development outcomes related to health, nutrition, education and gender.”