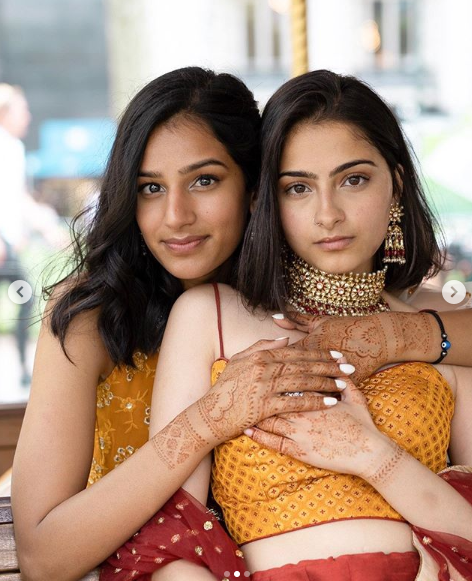 At a time when atrocities against same-sex couples have risen manifold, the pictures of Anjali Chakra and Sundas Malik, the Hindu-Muslim same-sex couple from India and Pakistan respectively, have ignited a ray of hope in our hearts. Not only that they’ve started a revolution – being two women lovers, Hindu-Muslim and from India-Pakistan.

The couple stay in New York and recently attended a Durga Puja ceremony with Anjali’s parents at their local community event. “We get to share so many of our traditions with each other”, Anjali had tweeted with a photoset of the pictures. Love has no boundaries and yet, we hear of religion, caste and other social norms that get in the way of true love. Still, Anjali and Sundas have managed to shatter that notion. Celebrating one year of togetherness, the couple shared their pictures on a photo sharing app professing their desire “to grow together in each other’s love.” The fairy tale like pictures have taken social media by storm and people have showered immense blessings that have been heartwarming for the couple who were overwhelmed with the positive responses to their pictures.

In an interview to Metro.co.uk, they said they felt good about young LGBTQIA girls, non-binary people and boys looking at their photos, feeling seen and not alone.

But it’s not been just a bed of roses for these two. Even though they’ve lived through their share of homophobic abuse and trolling, they maintain an optimistic attitude citing that people indulging in such behavior haven’t been exposed to LGBTQIA issues and don’t understand them well.

Acknowledging that many of their LGBTQIA siblings live through similar abuse without being heard, they thanked Twitter users who came out in their support and enabled them to talk about their relationship openly.

Recently, the world also celebrated the marriage of two male grooms, Amit Shah and Aditya Madiraju who had a traditional Hindu wedding.

Lawyers MenakaGuruswamy and ArundhatiKatju who fought tooth and nail against Section 377 of the IPC that criminalized gay sex between adults, also came out as a couple and have been showered with much love thereafter.

Meanwhile, in another part of the world, Uganda announced plans for a bill colloquially called “Kill the Gays” that would impose a death penalty on homosexuals, saying the legislation would curb a rise in unnatural sex in the east African nation. Under British colonial law, gay sex is punishable with up to life imprisonment and activists said the new bill risked unleashing attacks.