A recent opinion poll by a top US media house has suggested as to why President Donald Trump badly needed Indian-American settlers’ support at the Howdy Modi event, and the reason why he ensured Modi to declare “abki baar Modi sarkar”. A Fox News survey, carried out days before Modi’s much-publicized Houston event, said that 52% of those polled are “frustrated” with the Trump administration government, while only 37% are “energized.” 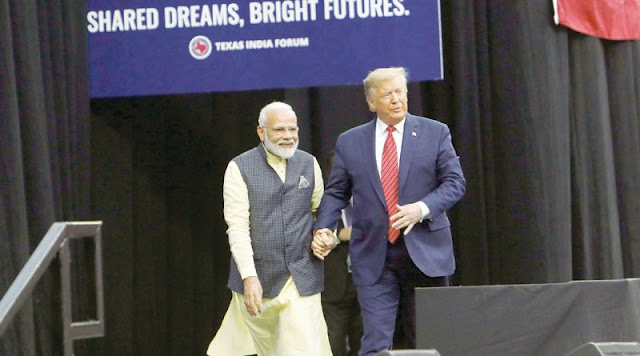 The survey comes within a month of the “partnership” between Trump and Fox News, of the type one sees between Modi and Republic TV in India, falling apart, with TV channel anchor Neil Cavuto declaring: “First of all, Mr President, we don’t work for you. I don’t work for you. My job is to cover you, not fawn over you or rip you. Just report on you – call balls and strikes on you.” Cavuto’s response was to Trump, who had tweeted: “Just watched Fox News heavily promoting the Democrats… The New Fox News is letting millions of GREAT people down! We have to start looking for a new News Outlet. Fox isn’t working for us anymore!”

Reporting on the survey, which took place on September 17-19, and released just ahead of the Modi event, a Fox News report said, “Many voters are frustrated with how the federal government is working and a growing number are nervous about the economy”. It added, “While 37 percent feel confident about the economy, 48 percent feel nervous. That’s up from a low of 43 percent nervous in March 2019.” “The poll also finds the president’s economic policies receive mixed reviews: 43 percent think Trump’s policies are hurting the economy, while 39 percent say helping”, the report says, adding, “Views are more negative on tariffs, as voters think they hurt rather than help the economy by a 45-31 percent margin.”

The report continues, “Despite those concerns, the economy barely makes the top five when voters are asked, without prompting from a list, the most important issue facing the country. Immigration is the most frequently mentioned at 13 percent. No other issue hits double-digits. Next is gun violence (9 percent), health care (8 percent), opposing Trump (8 percent), and the economy (7 percent).” 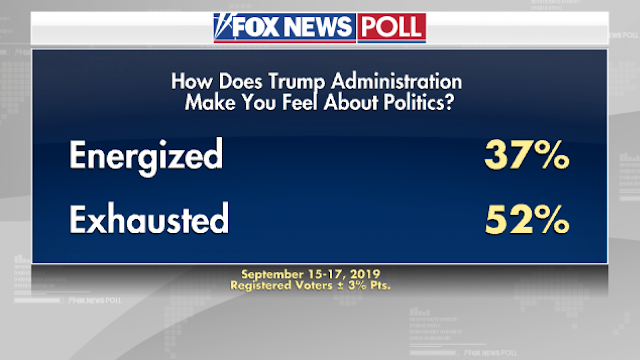 Pointing out that currently, 45 percent approve of the overall job the president’s doing, while 54 percent disapprove”, the report says, “In addition, 65 percent are dissatisfied (36 percent) or angry (29 percent) with the government”, which is “more than twice the 31 percent who feel satisfied (24 percent) or enthusiastic (7 percent).”

The report further says, “About two-thirds (64 percent) think many people -- if not nearly all people -- in government are corrupt, and almost half (46 percent) say the Trump administration is more corrupt than previous ones.” On the other hand, “25 percent say this White House is less corrupt than others and 24 percent think it’s about the same.”

Insisting that voters see “several threats to the stability of the United States”, the report says, “Nearly 6-in-10 see corporate influence over government (59 percent), racism (58 percent), and foreign interference in US elections (56 percent) as major threats to the country.”

Trump’s downward rating comes amidst another top Modi ally internationally, Israeli Prime Minister Benjamin Netanyahu, suffering a major defeat what a commentator calls, “despite the Centre-left’s abysmal campaign flop”.  Benjamin Netanyahu’s Likud party got 32 seats while Benny Gantz's Blue and White received 33 seats in election results. According to the present scenario Netanyahu's Likud-led bloc control 55 of parliament's 120 seats. On the other hand, Gantz's Blue and White-led left-bloc will have 56-57 seats.