How a variety of factors, not just anti-incumbency, contributed to BJP’s demise in three states

Written by Siddhant Mohan | Published on: December 18, 2018
The election results of five states on December 11 made good reading for people who have been wishing for the defeat of the Bharatiya Janata Party (BJP) in these states. Such wishes come with a silent satisfaction for many that the Congress came out as one big power in three out of five states: Rajasthan, Chhattisgarh and Madhya Pradesh. But the much-talked issue on various media platforms (even celebrated to a large extent) is that the BJP failed to secure a winning margin in states which have been adding to their power and pride; the feeling that it was going to rule the country in every manner and for a long time. The reason which has been cited the most for Congress’ win is the factor of anti-incumbency which was highest in Madhya Pradesh and Chhattisgarh. Raman Singh held the Chief Minister post of Chhattisgarh for three straight terms of fifteen years and Shivraj Singh Chouhan held Chief minister post in Madhya Pradesh from 2005 until 2018. The factor about Rajasthan which has been cited most is that the state has a tradition of giving power to BJP and Congress alternatively in assembly elections and that the win of Congress is the result of the same tradition.

However, these are not the regions where BJP was anticipated to fail. Reasons have been given from anti-incumbency to the tradition-following-voter to rule out the actual causes behind the BJPs huge loss in these elections, and believe me, the cited ones come last. And here’s why.

If assessed correctly, the politics and rhetoric of Hindutva were continuously prevailing in the campaign structure of BJP. Introducing Yogi Adityanath—whose image has never been of a politician but a campaigner of Hindutva repute—to campaign for BJP is part of the same agenda. Just a few days before the polls, BJP’s sister organisations started lobbying in Ayodhya on November 25 actually trying to “protest” for the creation of Ram Temple. The chief organizers of the event were Vishwa Hindu Parishad and Rashtriya Swayamsevak Sangh. When the question was put before the organisers that against whom they were protesting, there were no answers.

The same is with the case with the politics of Hindutva. This has been the largest outcry in the election agenda of BJP, but the enemy to the Hindutva has always been imaginary. The Hindutva policies do not have the exact idea over to stand against whom, when and why? The pre-poll act in Ayodhya and the fiasco to erect Rama’s statue along Saryu river had a clear goal: to polarise the voters in favour of BJP. But the party failed to acknowledge that not only Rajasthan and MP did not care much about this campaign, even UP did not take much interest in this issue.
Moreover, the political idea of Hindutva works mostly in the minds of youth. The youngsters between 21 to 35 years have been the target of BJP, as it conducted several campaigns and rallies in these states with the help of its students’ organisation, the Akhil Bharatiya Vidyarthi Parishad (ABVP) to create a young cadre. But the party surely failed to acknowledge that the idea of Hindutva would only work well if the youths get job opportunities. The unemployment rates have been highest in the recent past, and as one RSS Pracharak from Rajasthan told me, “We could not console a disappointed vote by giving it something it does not need at all.”

Hindutva’s tone could have worked well for the majority of votes if the youth was not disappointed with the basic problems and demands it has been raising.

Why we must pay more attention to the agrarian crisis
During the 2017 assembly elections in Uttar Pradesh, when everyone was talking about possible alliances, social equations, and caste politics in the state, one more agenda was one the table of the BJP: farm loan waivers.

This tactic—which was earlier exercised and excelled by BJP—was played well by Congress especially in Rajasthan and Madhya Pradesh, the states which have been hit the worst with the farmers’ issues.

Madhya Pradesh has been facing farmers’ protests—the major violent role in which was played by RSS-backed farmers groups—and Shivraj Singh Chouhan played out a high voltage drama of protesting against the protest last year, giving out idea to the rural population that he has been incompetent in dealing with farmers’ issues of the state. RSS backed organisations tried to destabilise Chouhan’s government with the help of Kailash Vijayvargiya, a veteran BJP leader who has waiting long to sit on CM’s chair in MP, but RSS could not make inroads for Kailash or any other BJP leader, leaving out the turf open for Congress to address farmers’ issues.

The situation with the Raman Singh government in Chhattisgarh was similar. He reportedly did a fair job in implementing central government schemes on the ground level but failed to address issues of farmers during his tenure. Farmers picked up the tone of Congress that it would waive off loans in ten days and went against the incumbent Raman Singh.

Moreover, the rural votes in these three states were chiefly affected by the Kisaan Long March which happened earlier this year under the umbrella of several socialist and left-leaning farmers organisations of the country. Combining the peaceful long marches, and the violent protests that happened in Madhya Pradesh, Rajasthan and Gujarat, Congress tried to cash the anti-BJP mood, which has been told just a matter of anti-incumbency.

Nehru-Gandhi-70 years and negative publicity
Narendra Modi and star campaigners in BJP have been projecting one image of a country that during its 70 years of rule, Congress did not give anything to this country. The dynasty politics of Nehru and Gandhi has also been one of the major focal points for the Narendra Modi.

But Modi failed to notice that he was giving out a golden opportunity of Congress exploiting this negative publicity by him. Every time Modi used his tone to scold Congress, Congress was also in the news and social media along Modi. Moreover, the public in Madhya Pradesh and Rajasthan, which was already trying to get rid of incumbent government and Raje’s stubbornness, soon realised that even Modi did not have something concrete to deliver. He promised a few things from his rallies, but his tone used to return to Gandhi-Nehru bashing all the time, giving out the idea that it was tough for him to stand by the public side. 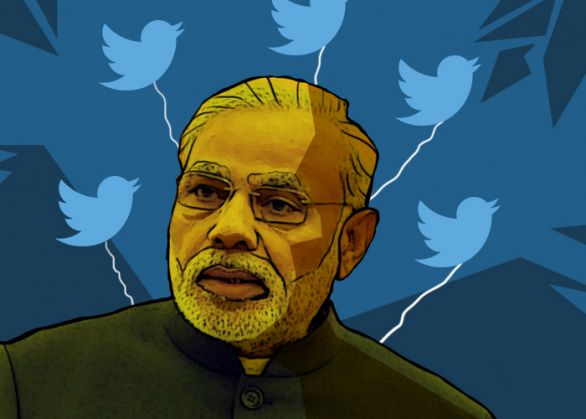 BJP’s failure to manage upper castes’ anger
On August 28, a day-long meeting including BJP’s chief ministers and deputy chief ministers was called in New Delhi. The meeting was being chaired by Narendra Modi and BJP’s own ‘Chanakya’, Amit Shah. While many issues were discussed in this meeting, the pressure was given on the Upper caste anger in many of the states. The anger was the result of the SC/ST Act, which parliament brought to restore the original bill.

Many of the Savarna pages on social media were urging upper caste voters to press NOTA in upcoming elections. The meeting on August 28 was essentially called to address this upper-caste anger. Instructions were given to CMs to reach out to upper-caste groups in their states and to make them aware of government’s welfare schemes which are equally beneficial for them. Meanwhile, strategists inside the party would work on the way to bring back its core trust base back to the party. This way, BJP thought, it could resolve the anger.

According to the party’s sources, the party could chart out a clear strategy to reach out upper castes and to make them believe that BJP is their party, as it has always been. But as a result, the BJP could not lose the tag of “upper caste party”—same as that of Congress—even after several attempts. Not that many Savarna people pressed NOTA, but they went on to press the Congress button on EVMs knowing that the latter has also the same repute between the upper caste voters of India.

Anti-incumbency, boredom and loss of Modi wave
One Twitter handle named @zoo_bear has tweeted a series of tweets after the results of the election came out on Wednesday. The series of tweets compare Modi’s rallies in certain constituencies of Madhya Pradesh, Chhattisgarh and Rajasthan, and the performance of the BJP candidates in those constituencies. In a majority of these place, the BJP candidates lost the election to Congress by huge margins and the others, the BJP won by small margins.

On the television panels, BJP leaders and spokespersons have been claiming that there is no loss of Modi wave and state election reflecting the nation’s mood is not a wise way to think. But, seeing the actual performance of BJP candidates in those areas tells a completely different story.
On the day of the elections results, Indian Express published a report telling if the mood of the nation goes like this, BJP can lose as much as 30 Loksabha seats from Madhya Pradesh, Chhattisgarh, and Rajasthan. BJP has also sensed it quickly, that is why it has sent an emergency note Intelligence Bureau (IB) asking it to assess the mood of the nation and submit a detailed report in the following weeks.

In the past as well, IB submitted reports to Modi-Shah predicting the mood of the voters before election results in these five states. Moreover, the IB reports are said to have taken as case studies to predict the election results and make strategies further.

Another important factor has been the negligence of Schedule Tribes and Schedule Castes in these three states, especially Chhattisgarh. The continuous anti-reservation gimmicks played out by BJP in Telangana and Madhya Pradesh to attract Savarna votes in its favours turned badly against itself in Chhattisgarh, where the rural farming population is mostly tribe.

As a political party, BJP must be mulling for future strategies. If sources are to be believed, it will also intensify the Ram Temple movement (with unstable and foggy agenda) to polarise voters in Uttar Pradesh, Rajasthan, Bihar and Uttarakhand to regain its hold on Hindu votes. The sign is clear that BJP is facing a tough road ahead, but one can only wait to see if the new and aggressive campaign strategies will work or not.