Once again, in the wake of KamleshTiwari's murder in Lucknow, it was Twitter, the micro blogging site used by 350 million Indians that became the battleground, figuratively, of a war. For three days, since Saturday, Oct 19, venomous hashtags have been used against Islam and Muslims, threatening to break out into physical retribution, anywhere. Is Twitter serious about its July 2019 policy on Hate mongering? On July 9, 2019, Twitter updated its hateful conduct rules to specifically prohibit language that dehumanizes others on the basis of religion. Despite this, Twitter users in India regularly find hatred-fuelled messages trending on Twitter every day. What gives? Let us have a look at why hate trends so consistently on Twitter.

How do tweets get on trending?
A trend is a topic or hashtag which has been algorithmically determined to be one of the most popular on Twitter at that moment. They are tailored according to your location, your interests, and who you follow. Location trends are a subtype of popular topics from a specific geographic location. The algorithm which determines these trends is set up to help users discover the emerging topics of discussion on the site.

Although Twitter claims that the volume of tweets focused on a topic is only one of the factors that the algorithm looks at, a topic cannot trend without a significant number of tweets being posted around it. A large number of tweets on an issue posted at the same time within the same geographical location gives the topic more than just a fighting chance to be featured as trending.

If, let’s say, a dozen people from one location start using a hashtagfor an hour, it is likely to be picked up by the Twitter algorithm. If the hashtag shows up on trending for a specific location, other users come into its contact, who may then make posts using the tag. Thus, bringing a hate-ridden topic to Twitter’s fore can be achieved without too much concerted effort. An Indian dataset study has shown that hateful accounts tend to express more negative sentiment and profanity in general.

The echo chamber effect
An echo chamber refers to a metaphorical space that amplifies or reinforces a certain set of ideas and beliefs by consistent, repetitive exposure to them. It can be thought of as creating an information bubble around oneself as a way of exercising confirmation bias and supporting motivated reasoning.

Social media sites like Twitter are echo chambers by design, since they are developed to increase user engagement by showing them content similar to what they already consume. Twitter has multiple features that try to hold onto the user’s interest by showcasing similar content. The site’s suggestions on who to follow, for example, helps create a bubble around the user in terms of the voices that can reach them. Each user’s news feed is accordingly populated with tweets that are likely to align with their interests or beliefs.

Conversely, since a user’s popularity on the site depends on the likes and retweets they muster, the user’s tweets are likely to be in line with their followers or any online community they wish to be part of. Receiving a like affirms that your two cents resonated with someone. Such affirmation is important for many people in radicalist circles, as this kind of support helps normalise a member’s beliefs in the community.

A group of persons belonging to an extremist community can, thus, easily manipulate twitter mechanics into by posting abhorrent comments and encouraging their group of followers to get it trending. HindutvaTwitterati are often seen making “hate chains” out of their tweets for this reason. 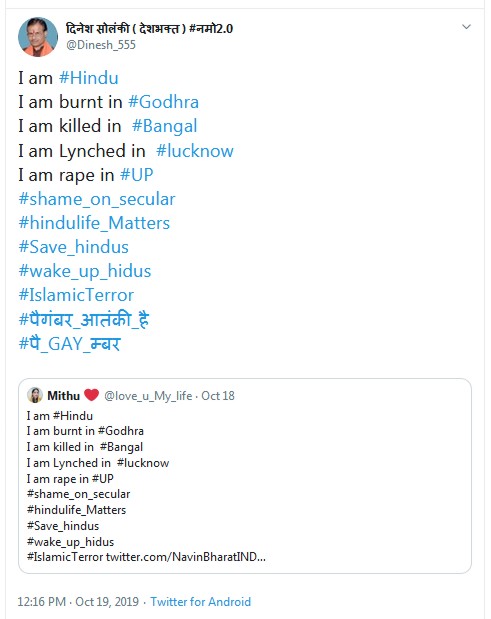 If not overt, one can often find covert connections between the hate-filled hashtags and persons engaged in politics. The author of the following tweet, AkashSoni, was reported by AltNews to have been an admin of a BJP WhatsApp group that was harassing NDTV journalist Ravish Kumar As the report notes, Soni’s Facebook profile and personal page have pictures of him with various BJP leaders, and has also posted publicly private numbers of journalists like BarkhaDutt, Kumar, RajdeepSardesai and Abhisar Sharma on his Facebook timeline.

Communal vitriol packs its volume
It is well understood that internet popularity wields power, and the ability to control public discussion can prove to be very useful. This is the primary reason for which political parties have their own IT cell to do their bidding in terms of garnering support and, sometimes, spreading propaganda.
[Note: Prior to the LokSabha elections, a former employee who worked in data analytics for the BJP alleged the party has collected reams of personal data to classify voters and add them to different group chats based on their location, socioeconomic status, age, religion and caste. The founder of BJP’s IT cell referred to it as Frankenstein’s Monster.]

Case Study: The KamleshTiwari Murder
The latest burst of hatemongering trends came after news breaking of KamleshTiwari’s murder. On October 18, 2019, the saffron leader was found dead in his Lucknow home with a slit throat and multiple gunshot wounds. Since his death, Twitter has been flooded with, and vitriolic and offensive tweets have been seen on the trending board.
It began with #KamleshTiwari, and #KamleshTiwariMurder. Soon enough, it devolved into blatantly islamophobichashtags in reference to a deplorable incident from 2015 where the saffron leader had referred to Prophet Muhammed as “the first Homosexual of the World”.

A flurry of vile hashtags calling the Prophet gay, a rapist, and a terrorist popped up in English and Hindi. Along with these jibes, a second wave of hashtags calling for a boycott of Muslims emerged.

From a long, hard look into these hashtagspopularised made by Saffron Twitter, one notices two methods that are commonly used to other and demonise the Muslim community

1. Insulting the Muslim Faith
In these type of posts, the users use a predecided hate chain of hashtags that call the Prophet names, and often include islamophobic captions.
A few examples:
"Islam is not a religion, it's a way to spread terror." https://twitter.com/Nikesh/status/1185755895122157568 [Note: contains expletives]

“Today, A truth is trending!” 3. Asking Hindus to Wake Up
A surge of tweets seem to equate Tiwari’s death to mean that the entire Hindu community is in danger and needs to “wake up” from their stupor and take action against Muslims, lest you are next in line.
A few examples: “If they want "Violence", we will show what is "Violence" by means of Blood.” 4. Asking Hindus to Boycott Muslims
On a similar note, other fundamentalists are found imploring their followers to stop availing goods and services of Muslims.
A few examples:

“YOU are giving every penny of your money to them” Hateful tweets have #consequences
As social media becomes more intrinsic to our daily lives, it has also begun to play a role in our conflicts. In the United States, a study has shown that cities with a higher incidence of hateful tweets have more actual hate crimes. In India, multiple incidents of social media-related fatalities have been reported over and over. Internet shutdowns often follow communal riots. The insurgence of these tweets cannot be treated lightly. There are around 350 million Indians on social media, even a small fraction of those people taking up arms against one another can prove to be disastrous for the fabric of this nation.

What can Twitter do?
Twitter’s hateful conduct policy clearly states that a user may not promote violence against or directly attack or threaten other people on the basis of their religious affiliation. The company states that it would take action against accounts that participate in any of the following types of behaviour: violent threats; wishing, hoping or calling for serious harm on a person or group of people; references to mass murder, violent events, or specific means of violence where protected groups have been the primary targets or victims; inciting fear about a protected category; repeated and/or non-consensual slurs, epithets, racist and sexist tropes, or other content that degrades someone; and hateful imagery.

Evidently, these tweets go against the company’s policy, but the presence of the hate-fuelled hashtags is proof that no real action has been taken against by organisation. Salman Soz called out Twitter India on the anti-Muslim hashtags trending in India. Twitter has proven its capacity to take action against hate speech and propaganda before.

However, it has been previously argued that Twitter profits greatly from users’ extremist political views.As Darren Linvillnotes, Twitter didn’t report a profitable quarter until 12 years after its founding in 2017. The company wouldn’t view it as being in its financial best interest at this point to alienate a large portion of its users.