A top aide of Gujarat chief minister Vijay Rupani has doubted the authenticity of the article written by Mahatma on Gandhi January 27, 1948, three days before his death. Hitesh Pandya, who was assistant public relations officer (PRO) under Narendra Modi’s chief ministership in Gujarat, and is currently serving as PRO of Rupani, has said, there is “reason to doubt”, since the article appeared on February 1, 1948, two days after Gandhi’s assassination. 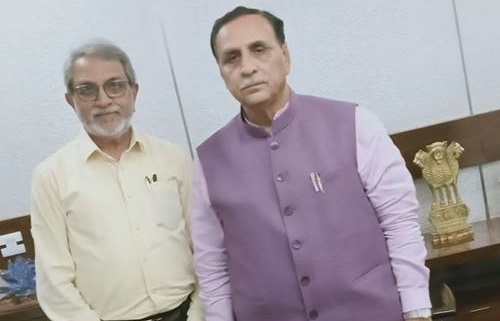 Pandya’s reaction has come in the form of a response to a Facebook post, where well-known Gujarati journalist and Sardar Patel expert, Hari Desai, has released the impression of “Harijan”, which published Gandhi’s article “Congress Position” dated January 27, 1948, and published in “Harijan” on February 1, 1948. The article, in English, says the “Indian National Congress ... cannot be allowed to die”, and that it can “only die with the nation”. 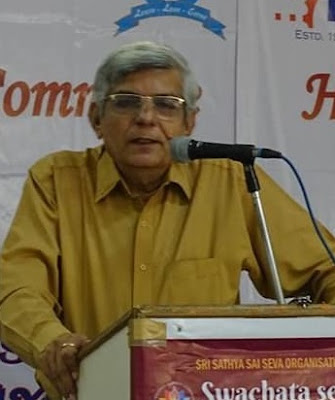 Hari Desai
Gandhi says, “The Indian National Congress which is the oldest national political organization and which has after many battles fought her non-violent way to freedom cannot be allowed to die. It can only die with the nation. A living organism ever grows or it dies. The Congress has won political freedom, but it has yet to win economic freedom, social and moral freedom.”

Gandhi adds, “These freedoms are harder than the political, if only because they are constructive, less exciting and not spectacular.” Desai, putting the image of “Harijan” on Facebook, has caused flutter across Gujarat’s powerful circles, including the state BJP rulers, known to be close to Prime Minister Modi and his right hand man, Amit Shah, who had been trying to had to say that Gandhi had actually sought the dissolution of the Congress after Independence.
While Desai says that this is the only authentic view available on what Gandhi said about the Congress, Pandya, in his response, says, “Who knows? The article was published in ‘Harijan’ three days (sic!) after the death of Gandhi. What is its authenticity? It is quite possible that that some Nehruvian editor may have written this historical (sic!) article and published it in the name of Gandhi.”
Pandya continues, “Secondly, Gandhi must have in is his mind the dissolution of the Congress, otherwise what was the need for publishing such an article? This apart, ‘India Today’ on October 2, 2017 published an article which should be read by the lovers of history.” Thereafter, he quotes the article, which says that Gandhi “wrote that the Congress ‘has outlived its use’ and advised ‘to disband the existing Congress organization’.”

The ‘India Today’ , however, also said that “this is not the whole picture”, adding, “What Mahatma Gandhi said about the Congress in January 1948 formed the part of a note written by the Father of the Nation on January 27, 1948 – three days before he was assassinated in New Delhi. The note was a draft constitution for the Congress in the post-Independence era.”
Pointing out that the note was “meant to be discussed by the All-India Congress Committee and put to vote for passage and adoption”, India Today also says, “But Mahatma Gandhi saw Congress's utility in shaping India's future. He listed out his reasons in the draft constitution for the Congress. He said, ‘India has still to' attain social, moral and economic independence in terms of its seven hundred thousand villages as distinguished from its cities and towns’."

Objecting to what Pandya, Desai asserts, “You should have cared to read the date at the bottom of the article – January 27, 1948. You have been working in a daily and should know pretty well that Sunday Supplement is printed on Thursday with date of Sunday. Gandhi always marked dates when he wrote articles or letters. You can ask the National Archive and the Gandhi Archive to show the manuscript. The tendency to reject such Gandhian literature shows bankruptcy of our generation.”

Meanwhile, Pandya has refused to reply to a query from Counterview, posted on Facebook, on whether what he has said – that Gandhi’s article in “Harijan” may not have been written by Gandhi but some ‘Nehruvian’ editor – is the official position of the Gujarat government.