A Bill & Melinda Gates Foundation-funded study has found that malnutrition remains the “predominant risk factor for death in children younger than 5 years of age”, accounting for 68.2% of the total under-5 deaths, and remains the “leading risk factor for health loss for all ages” despite the Government of India's huge budgetary funding to the tune of US$1.3 billion and the "hope" that the Swacch Bharat Mission would reduce malnutrition. 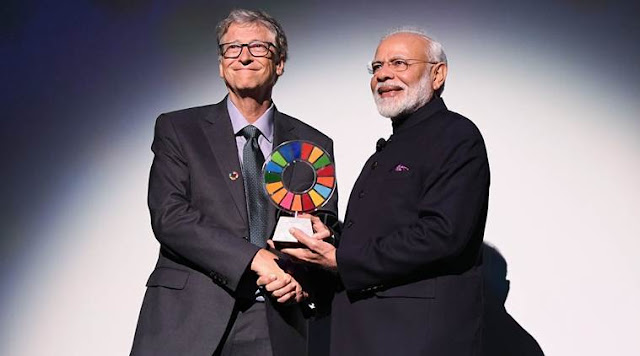 The study was released on September 18 by the e-journal "Lancet", days before the Gates Foundation awarded Prime Minister Narendra Modi the Global Goalkeeper for the Swachh Bharat Abhiyan in US amidst objections by prominent academics, including three Nobel laureates.

Based on these estimates, the study believes, it is safe to assume that the National Nutrition Mission (NNM) 2022 – a flagship programme of the Ministry of Women and Child Development (MWCD), Government of India, with goals to achieve improvement in nutritional status of Children from 0-6 years, adolescent girls, pregnant women and lactating mothers in a time bound manner – would not be achieved. Thus, according to the study, the trend between 2010 and 2017 suggests in 2022 “there would be 8.9% excess prevalence for low birthweight, 9.6% for stunting, 4.8% for underweight, 11.7% for anaemia in children, and 13.8% for anaemia in women relative to the 2022 targets.”

The study believes, “The trends up to 2017 indicate that substantially higher rates of improvement will be needed for all malnutrition indicators in most states to achieve the Indian 2022 and the global 2030 targets.”

Titled “The burden of child and maternal malnutrition and trends in its indicators in the states of India: the Global Burden of Disease Study 1990–2017”, the study states, “Within child growth failure, the highest contribution to disability-adjusted life years (DALYs) was from wasting, the prevalence of which declined only moderately in India during 2010–17.”

At the same time, according to the study, “The prevalence of child overweight has increased considerably in India in the past decade, with a prevalence of 12% in 2017.”

The findings in the study indicate that, if the trends up to 2017 continue, “The NNM 2022 and the WHO and UNICEF 2030 targets will not be achieved in most states of India, except for low birthweight and stunting in a few states and exclusive breastfeeding in several.”

It adds, “Because low birthweight was the largest contributor to child malnutrition DALYs in India, its slow decline should be addressed as a priority. South Asia, with India as its largest component, is estimated to have the highest prevalence of low birthweight for any region in the world.”

At the same time, the study regrets, “A major issue with tracking low birthweight is the poor quality of birthweight data in many low-income and middle-income countries, including India.”


The study finds that gap between projected child wasting percent prevalence and WHO- UNICEF 2030 target is 14.6% in Gujarat, the highest in India

Wasting, or low weight for height, is a strong predictor of mortality among children under five. It is usually the result of acute significant food shortage and/or disease.

Referring to the Government of India’s revamped NNM with a budget of US$1.3 billion to “comprehensively address the challenge of persistent undernutrition” by systematically synergising a variety of nutrition-related activities of various government ministries and stakeholders in order to strengthen many maternal and child health initiatives, the study calls “the malnutrition indicator targets set by NNM for 2022 “aspirational”.

It says, while the ongoing sanitation improvement drive in India under the Swachh Bharat Mission is may contribute to the reduction in malnutrition, “The rate of improvement needed to achieve the targets is much higher than the rate observed.”