Written by Dr. Muniza Rafiq Khan | Published on: August 18, 2017
An investigation team of India Today TV channel has exposed the shocking fact of some molvis from Delhi and west UP turning the Islamic stipulation of nikaah halala into a lucrative business offering their ‘sexual service’ for cash to enable a divorced wife from re-uniting with her estranged husband. Using candid camera, the sting operation has videographic evidence of several molvis speaking to undercover India Today correspondents offering their one-night “service” to a victim of triple talaq for a “fee” ranging from Rs. 20,000 to Rs. 1.5 lakh.

It is said that during the time of the Prophet some men used to keep women on tenterhooks through the humiliating practice of divorcing their wives and remarrying them again and again. To put a check on this practice, the Quran stipulated that if a husband divorces his wife three times (marriage-divorce, remarriage-divorce, remarriage-divorce), she then becomes haraam (prohibited, illegal) for him. He can no longer remarry her yet again except under certain circumstances which are as follows: the divorced wife marries someone else, the marriage is consummated, the second marriage happens to end in a divorce or the husband happens to die. Only in such a situation does it become halal (permitted) for the original husband and wife who already have three divorces between them to remarry (nikaah). Thus, nikaah halala.

What was meant to be a check on the humiliation and exploitation of women has been turned on its head and women are the victims once again.

For some clerics, in India and elsewhere too, nikaah halala has come to simply mean that a husband can remarry his wife after triple talaq, provided she were to marry some other male, the marriage is consummated, followed by instant divorce. Bluntly stated, it means that a divorced wife must have sex with another man, even if only once, before she becomes halal once again to her husband.

It is for this consummation of the marriage for which several molvis from north India have been caught on candid camera offering to themselves sleep with the estranged wife for a night or even a few hours to complete the supposed procedure for nikaah halala.

To understand the Islamic position on this shameful practice, Sabrang India spoke to two senior maulanas from Varanasi. Both maulanas issued a written fatwa is response to a written query and also spoke on camera denouncing the practice as un-Islamic, inhuman, anti-women, shameful, disgraceful.

Here below are the English translations of the operative parts of the two fatwas issued in Urdu:

Summary: Fatwa of Maulana Abdul Batin, Chief Mufti of Darul Ifta Ibrahimi, Varanasi
If the facts as disclosed by the said TV channel are correct and true, the molvis concerned are entirely to be blamed. Their misconduct has nothing to do with the teachings of Islam. No words are adequate to condemn such molvis. If they are in fact guilty of such dirty, disgusting, disgraceful and unholy conduct, the same can never be sanctioned by the Shariah, law of the land or any code of civilized conduct. It therefore becomes obligatory on such persons to repent having behaved in such lowly fashion and seek God’s forgiveness. If having repented they refrain from such conduct in future they should be forgiven. If not, it becomes the duty of the leadership of the community and society to take necessary punitive action against them.
Summary: Fatwa of Maulana Mohammed Haroon Rashid Naqshbandi, Mufti and Imam Usmania Jama Masjid, Varanasi.
If the allegations against the molvis are found to be true and correct, if for a fees (irrespective of the amount charged) and as a matter of business they are engaging in relations with an estranged wife in order to make her halal (legitimate) for the husband, then from an Islamic point of view such people are guilty of committing a very grave sin. Their conduct is totally haram and they are worthy of the most stringent punishment. It is the duty of Muslims to socially boycott such molvis for Allah has clearly directed believers not to associate with people who indulge in sinful acts.

Here are the copies of the original fatwa: 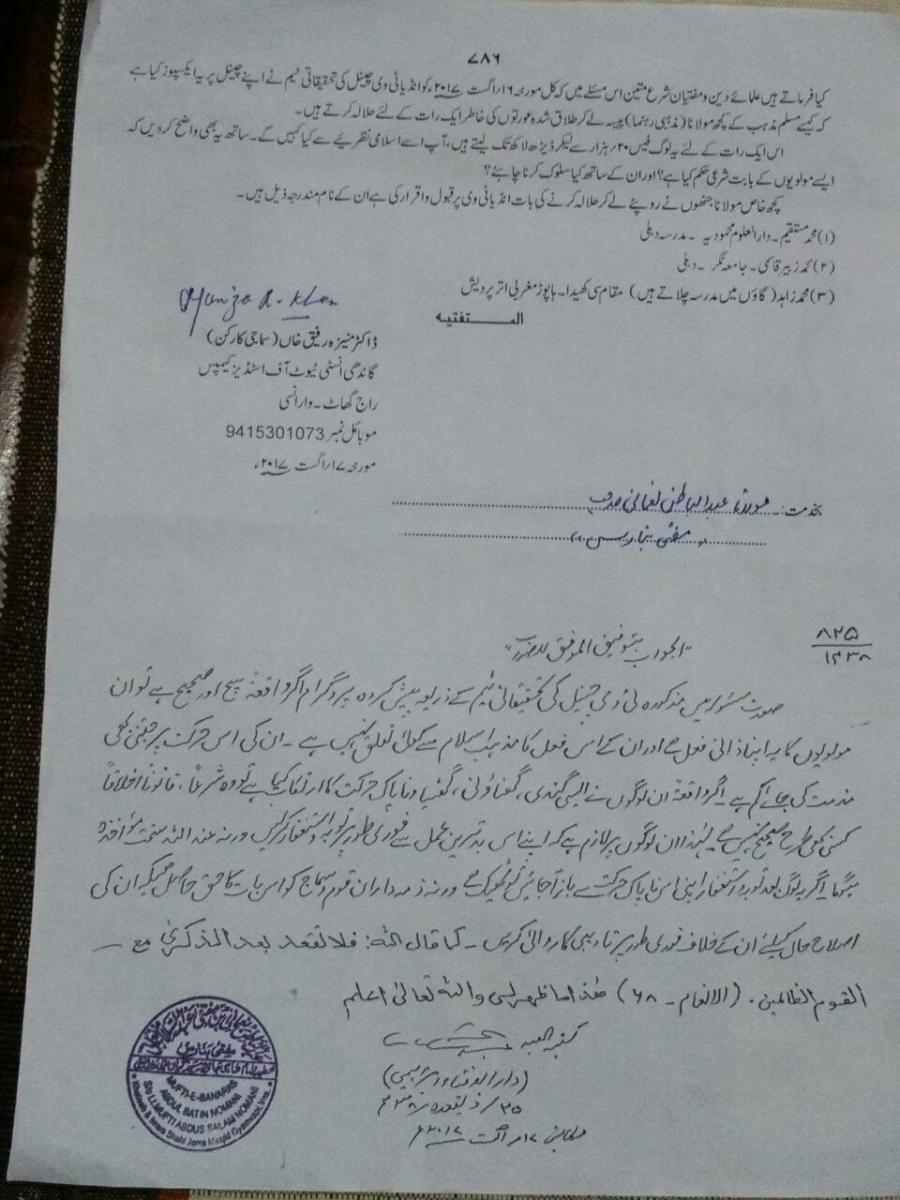 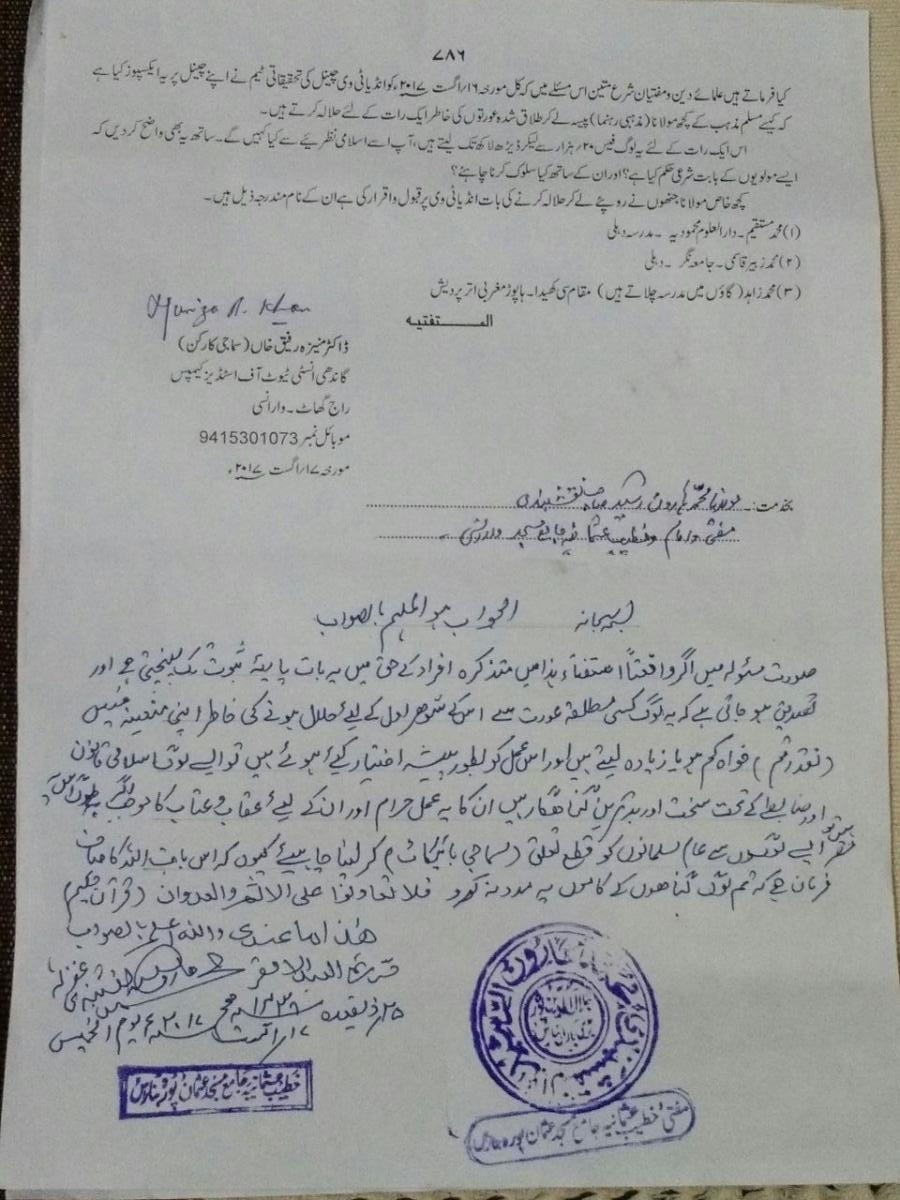 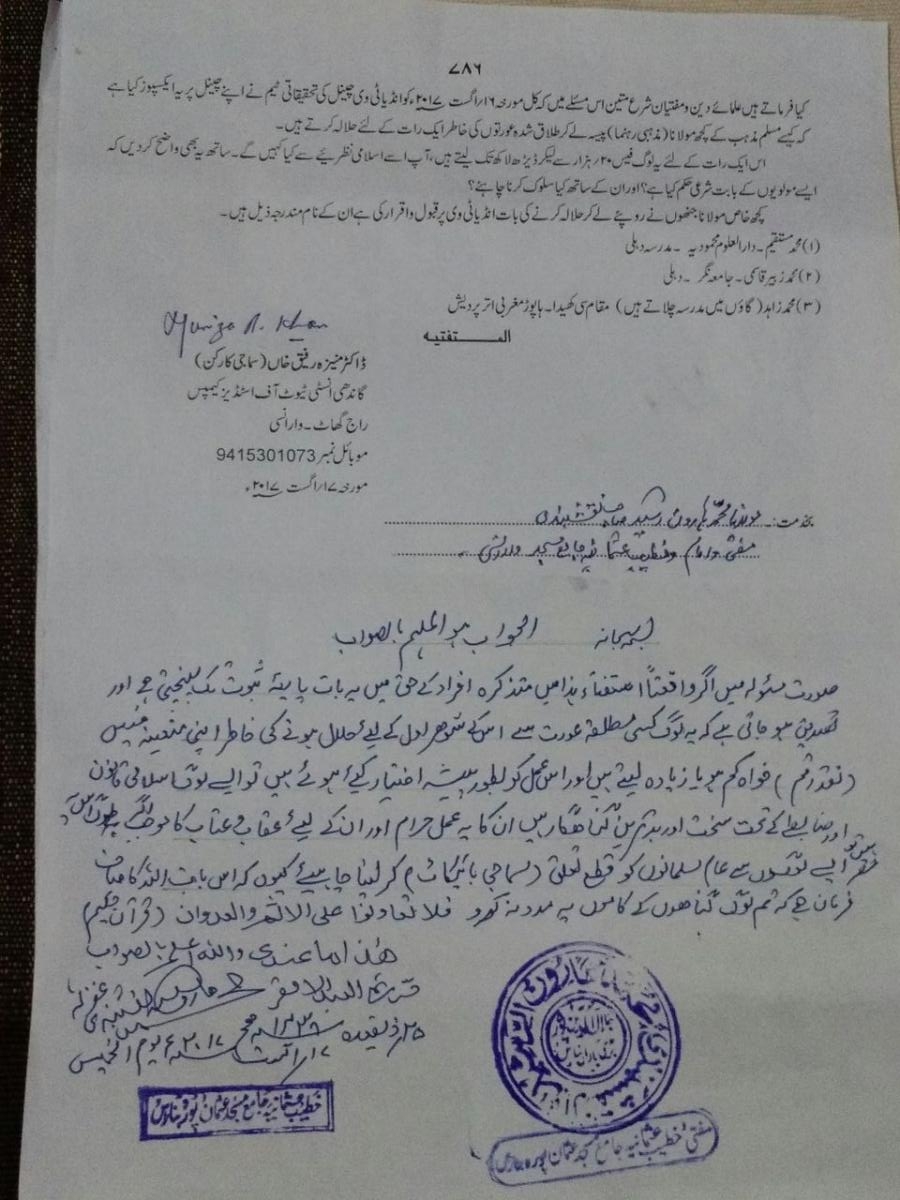