Written by Amitabh Kumar Das | Published on: August 16, 2019
The Uttar Pradesh Govt has decided to withdraw seven cases against a BJP MLA Sangeet Som. These cases include Muzaffarnagar riots cases. UP is ruled by a saffron-clad self-styled Sanyasi (monk) Yogi Adityanath. I call him Dhongi Adityanath because he has Gorakhpur riots blood on his hands. Dhongi Adityanath reportedly called upon Hindus to pull out Muslim ladies from their graves and rape them! Dhongi Adityanath’s original name is Ajay Singh Bisht. He is a Thakur/Rajput and his Hindu Yuva Vahini mainly consists of Rajput goons who molest Dalit girls and celebrate the Rana Pratap Jayanti! In short, the Gorakhpur riots accused has decided to withdraw cases against the Muzaffarnagar riots accused. “Chor-Chor Mausere Bhai” goes an old Hindi saying. To jog readers’ memory, let me remind them that just before 2014 Lok Sabha polls, Sangeet Som and his blood-thirsty gang engineered communal riots in Muzaffarnagar, a town in the Western UP. In the surcharged post-riots atmosphere, Jat and Muslim voters got polarised and the blood-thirsty Ram Bhakts reaped a very good electoral harvest. As political analysts tell us that rains of blood are followed by bumper crop of votes! 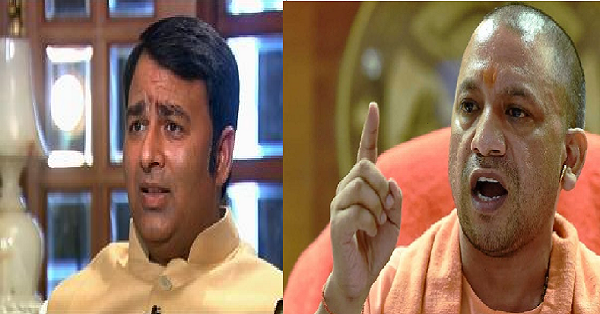 Ever since Dhongi Adityanath became the UP CM, the law and order has gone for a six. The Rajput CM has made a Rajput IPS the state DGP: OP Singh. And a Rajput MLA Kuldeep Sengar has gone berserk. The Unnao rape case has made international headlines. A Rajput MLA raped a girl and got her father murdered. Then an “accident” took place and the victim’s aunt was killed. But the Rajput CM and his pet Rajput DGP looked the other way. The girl is still on a ventilator. The Supreme Court of India finally intervened. The girl was given compensation, the CRPF protection and the trial was shifted to Delhi.

The terror unleashed by Rajput goons in UP is unparalleled. In UP towns, big and small, Rajput hoodlums gather under the pretext of celebrating Maharana Pratap Jayanti. They all are armed to the teeth. Then they raid Dalit homes and rape Dalit girls at gun point. Sometimes, they damage Ambedkar statues claiming that Ambedkar points his finger towards Rajput ladies! When the Bhim Army retaliated in Saharanpur, the Rajput hooliganism caught national attention.

The biggest mafia don in UP is a Rajput: Raja Bhaiyya. The MLA from Kunda is known as Kunda Ka Gunda. His name figured in the murder of Zia ul Haq, a senior police officer. But the CBI, called a “caged parrot” by the Supreme Court, gave him a clean chit. Mayawati invoked the dreaded POTA against Raja Bhaiyya but with Dhongi Adityanath at the helm, Raja Bhaiyya is a monster unchained. The Chief Minister is busy changing names. From Prayagraj to Allahabad, from Mughalsarai to Deen Dayal Nagar. Adityanath also wants to ban the Hindi word “gorakh-dhandha” (a racket) because the word insults Guru Gorakhnath! And Raja Bhaiyya is left untouched in his palace.

The UP Govt has put Muslims on its hit list. Kafeel Khan, Azam Khan etc. Dr Kafeel Khan was made a scapegoat after 70 kids died in a Gorakhpur hospital when the oxygen supply was cut off. And Azam Khan’s Jauhar University is raided day in and day out. Target Kafeel Khan and Azam Khan because they are Muslims. Don’t touch Kuldeep Sengar and Raja Bhaiyya because they are Muslims. Dhongi Adityanath’s policy is clear in UP, now called Ulta Pradesh by many.

As far as the withdrawal of riots cases against Sangeet Som is concerned, I hope that the Govt orders will be challenged at the Allahabad High Court. When the forest brigand Veerappan kidnapped Kannada super star Dr Rajkumar, the state Govt decided that cases would be dropped against Veerappan’s accomplices. But a police martyr’s father challenged the Govt move in the Supreme Court and the apex court ruled against the withdrawal of cases. I hope that families of Muzaffarnagar riots victims will oppose the withdrawal of cases against Sangeet Som. And Allahabad High Court will call Dhongi Adityanath’s bluff. Ulta Pradesh has suffered enough.