Written by Swagata Yadavar, Athar Parvaiz | Published on: September 14, 2019
Srinagar and Baramulla: She sat in a corner, beside the door of the doctor’s office, hidden by papers and medicine boxes on the compounder’s table. “I feel frustrated thinking about the future, I feel there is no future for us,” 24-year-old Zahra, told IndiaSpend. Zahra is a law graduate, who is now preparing for the state civil services (judicial) examination. A patient of depression, she had not required medicines for three years until the removal of Article 370 marked a return of anxiety. “I can’t focus on my studies anymore,” she said. 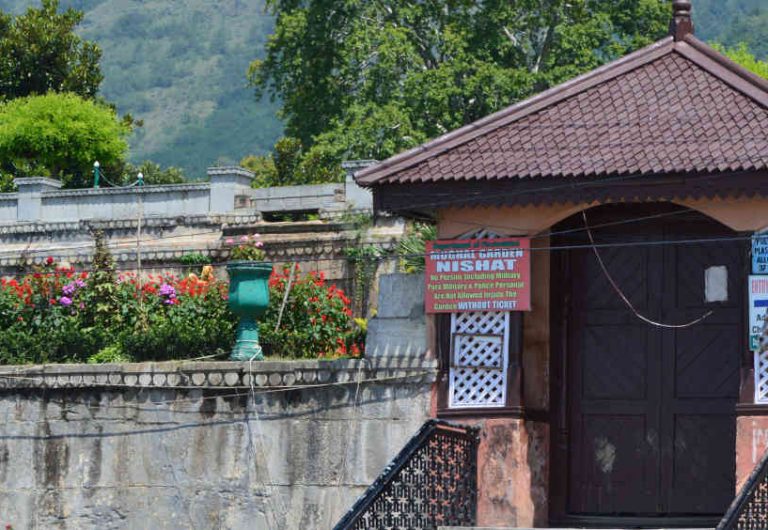 Nishat Garden, opposite Dal Lake, a popular tourist destination in Srinagar, has remained closed since the abrogation of Article 370. The political and armed conflict has had an adverse impact on economic growth and infrastructural development in the erstwhile Jammu & Kashmir, also impacting citizens’ mental health.

Zahra was one of 15 patients waiting to see neurophysicist Akash Yusuf Khan at his clinic in Baramulla, 55 km from Srinagar. Housed in a poorly maintained municipal complex, the clinic is open only on Sundays; on other days, he consults at the district hospital.

Doctors predicted a rise in the number of cases presenting with stress and anxiety, as a consequence of the removal of Article 370 and the accompanying communications blockade that has prevented many from talking to their families, or stepping out of home for fear they will be unable to contact their families when out.

IndiaSpend reported on the health crisis that has ensued, as well as the impact on Kashmir’s economy, of the events following August 5, 2019.

The blockade has also resulted in fewer people accessing mental health care in August 2019. Médecins Sans Frontières (MSF, or Doctors Without Borders) has shut down mental health services in four districts of Kashmir valley as they are unable to reach their staff.

As a conflict-torn region, Kashmir has historically reported widespread prevalence of mental health issues. Nearly 1.8 million adults in Kashmir Valley--45% of the population--showed symptoms of mental distress, a 2015 survey by the humanitarian organisation MSF said. The survey found that 41% of the population showed signs of depression, 26% showed signs of anxiety and 19% showed probable symptoms of post-traumatic stress disorder (PTSD). 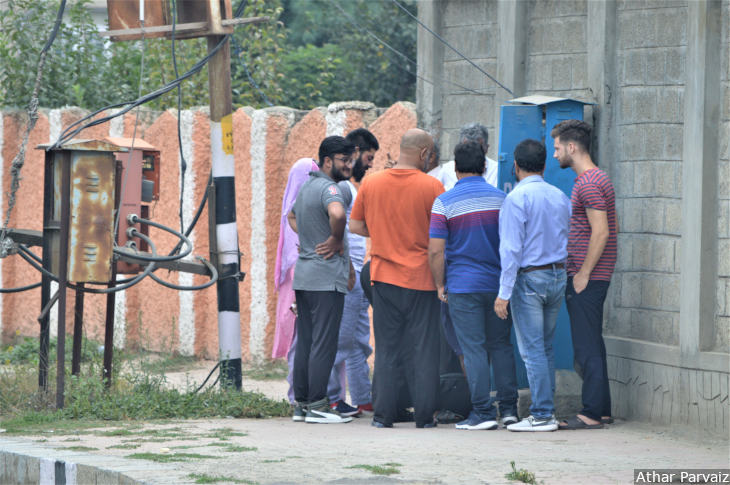 Locals huddle around technicians as they restore landlines in Haiderpura, Srinagar, September 7, 2019.

Unemployment, conflict
Currently, people are unable to resume work and there is little distraction or entertainment. Many Kashmiris we spoke to said they did not mind the civil strike--the shutdown of shops and businesses--but were anxious about the uncertainty of what lies next. Many said they felt hurt and humiliated, their sense of identity taken away.

Even outside of times of peak conflict, the unemployment rate in Jammu & Kashmir has been high--in 2015 it was 22.4% in the 18-29 years age group, almost double the India average of 13.2% for this age group, according to the 2016 Economic Survey.

Patients reluctant, unable to access healthcare
Since August 5, 2019, it has been difficult for people to access health facilities, and hospitals have reported a drop in patient numbers, as IndiaSpend reported on September 6, 2019. Even in a normal situation, few people access mental healthcare, in particular.

About 44.5% fewer patients visited the Institute of Mental Health and Neuro Sciences (IMHANS), Srinagar, in August, when compared to July, but this data is inconclusive as the number of patients was even lower in May.

On the other hand, in recent weeks, more patients have been visiting general out-patient departments (OPD) with symptoms of anxiety and reporting palpitations since August 5, said a general physician working at the Baramulla district hospital, who did not want to be identified. Such patients are referred to the psychiatric OPD. Chemists outside the hospital said there was an increase in the demand of antidepressant and anti-anxiety medicines, especially in the 16-30 years age-group.

Srinagar’s old town, where IMHANS is, has more restrictions on movement than other areas, which has led to a fall in the number of patients. Patients find it easier to reach district hospitals, such as the one in Baramulla.

The exact impact of the communication blockade and the political decision on people’s mental health will only be known after a few years, said a senior psychiatrist at IMHANS, who wished not to be named. “The average lag between people facing mental health issues and seeking treatment is about 3-5 years.”

This gap is now reducing but people still take a few months before they ask for psychiatric help, the IMHANS psychiatrist said, giving the example of the 2016 unrest in the Valley--when Indian security forces had killed the militant Burhan Wani, causing the state to suffer an estimated loss of more than Rs 16,000 crore between July and November that year.

Patients had started coming in only after a year of that incident, the IMHANS psychiatrist said. People prioritise their basic needs and not mental health during periods of turmoil and seek help after things normalise, he explained, “Also a very minuscule proportion of people seek help, rest find other ways to cope. Human beings are very resilient.”

Kashmiri adults use prayer as a coping strategy, as well as talking to a family member or friend, and “keeping busy”, the MSF study said.

Because of the constant political conflict and violence, Kashmir has also seen a rise in drug addiction, as IndiaSpend reported in November 2017. 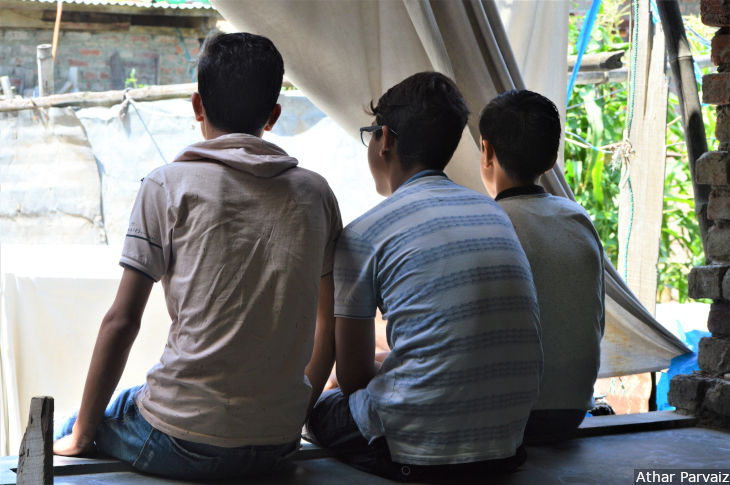 Children from Rainawari in downtown Srinagar sitting in a courtyard. They have not gone to school since August 4, 2019, though the government said on August 19 that schools had been reopened.

All that Sadiya, 13, has done over the past month is sit at home and visit three relatives’ homes in the neighbourhood. “I feel suffocated, being indoors all the time but what can we do?” said Sadiya, dressed in a yellow salwar-kameez and black headscarf, sitting in an open courtyard near her house.
Sadiya lives in Rainawari, a neighbourhood in the old town area of Srinagar, which is heavily guarded by security forces and faces constant restrictions and curfews. She is prone to fainting spells and headaches, she said, attributing them to constant worrying for her father’s safety. “I am always worried whenever my father goes out to buy vegetables or to the masjid (mosque) to pray, I want him to be safe,” she said.

Sadiya has not been to school since August 4, though the government said August 19 that schools had been reopened. Parents are not sending children to school due to the uncertain security situation. “We were supposed to have our exams now… but now we are stuck where we were,” Sadiya said, adding that her fainting spells and headaches had worsened ever since she had been housebound.

If her father, a washerman, did not go to work, he could not support her education, Sadiya said, adding, “I want to become an engineer so that my papa doesn’t have to toil anymore. I don’t think I can fulfil my dream anymore.”

Most children we spoke to were aware of the removal of Article 370 as they had read the newspapers and watched TV news. 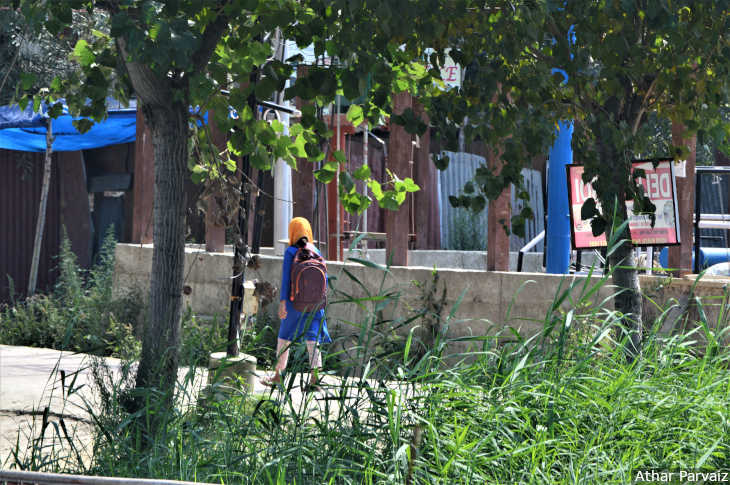 A student going to her tuition classes in Srinagar, September 9. The government said schools reopened on August 19, 2019, but parents have not sent their children to school since August 5 due to security concerns.

Among the children we spoke to, muted Eid celebrations and no news of loved ones were frequently cited as factors that had left them disturbed, fearful and anxious.

(Yadavar is a special correspondent with IndiaSpend. Parvaiz is an independent journalist based out of Srinagar.)