Chief Minister or “Cheap” Minister? Haryana CM is a disgrace

Written by Amitabh Kumar Das | Published on: August 13, 2019
Haryana CM Manohar Lal Khattar looks like a “tau” (father’s elder brother). His thick,white moustache makes him look like a family elder concerned about izzat (honour) of bahu-betis (dughters and daughter in laws). But looks are so deceptive. The Chief Minister is a third-rate guy who is not above making lurid comments about young girls. The way he has commented on bringing Kashmiri girls as bahus (daughter in laws) of Haryana after the scrapping of Article 370 is downright distasteful, to say the least. Does this neta believe that the Article 370 has been abrogated so that Haryanavis can have sex with Kashmiri girls? The CM who flaunts his bachelorhood like a badge of honour has shown his true colours. For this RSS “pracharak“, women are only sexual objects. 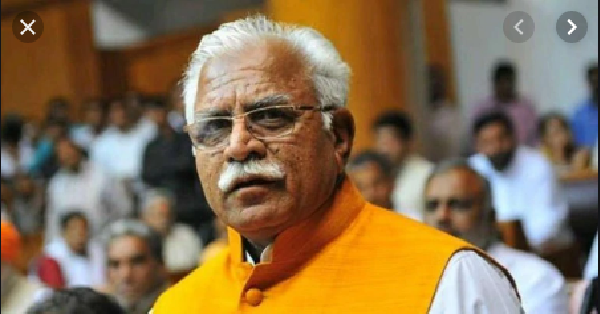 Haryana CM Manohar Lal Khattar stoked a controversy with a remark that people are saying they will bring girls from Kashmir for marriage after abrogation of the provisions of Article 370 of the Constitution But controversy has been Khattar’s middle name ever since this unknown RSS pracharak became the surprise choice of the BJP high command. The whole operation was carried out in a cloak-and-dagger fashion so typical of the RSS-BJP functioning. Prior to the assembly polls, the BJP gave an impression that Captain Abhimanyu would become the CM if the BJP came to power. Captain Abhimanyu is a Jat and the Jats queued up at polling booths to press the Lotus button. But after the polls, the party did a somersault and threw Captain out like a “doodh ki makkhi“. The RSS headquarters in Nagpur ensured that Khattar, an old RSS pracharak was pitchforked to the CM chair. (When Sonia directs Manmohan, the media calls it remote control. When the RSS directs the BJP, the media calls it  “maargdarshan“!) So this khaki knicker walla became the Haryana CM with his reactionary agenda.

And what did Khattar do? He changed Gurgaon’s name. Gurgaon became Gurugram. The Hindu fanatics maintained that once upon a time Guru Dronacharya lived here. Therefore, the new name will bring back ancient glory. Some liberals pointed out that Guru Dronacharya took Eklavya’s thumb as “guru-dakshina” because the tribal boy was surpassing a Kshatriya archer Arjuna! Should such a casteist Guru be honored? But liberals were shouted down by the saffron brigade. Gurgaon is the Millennium City which owes its existence to Rajiv Gandhi’s vision. But Khattar can’t look beyond Guru Dronacharya!
Khattar again came to limelight when the rapist Baba Ram Rahim was convicted. Khattar allowed thousands of Dera Sachcha Sauda followers to gather in Panchkula. When the chamatkari-turned-balatkari Baba was held guilty by the CBI court, his goons went on rampage and dozens of men and women lost their lives. But Khattar was all smiles. After all, the Dera Sachcha Sauda has a big vote bank in Haryana and Khattar was successful in the “sendhmaari“of the vote bank!

Haryana is a state whose society will put the Taliban to shame. “Khaps” are panchayats of Jats. These khaps regularly sentence lovebirds to death! Young boys and girls are hanged from village trees as Chaudharies smoke hukka and watch. But Khattar does nothing. The appeasement of Jats is paramount in the caste-ridden Haryana. Jat hoodlums agitating for reservation cut off water supply to Delhi. And Khattar remained a mute spectator.

Now, the same Manohar Lal Khattar is cracking cheap jokes about Kashmiri girls. India is fed up with Manohar Lal’s Manohar Kahaniyan. But what can we expect from a guy whose guru is Baba Ram Rahim?