A new book, ‘The Anarchy: The Relentless Rise of the East India Company’, authored by well-known Scott historian William Dalrymple, has said that a major reason for the success of the East India Company (EIC), which “colonized” the country between 1600 and 1857, was the support it got from Indian financiers or moneylenders, including Jagat Seth of Calcutta, Gokul Das of Benaras and other “Hindu bankers” of Patna and Allahabad. 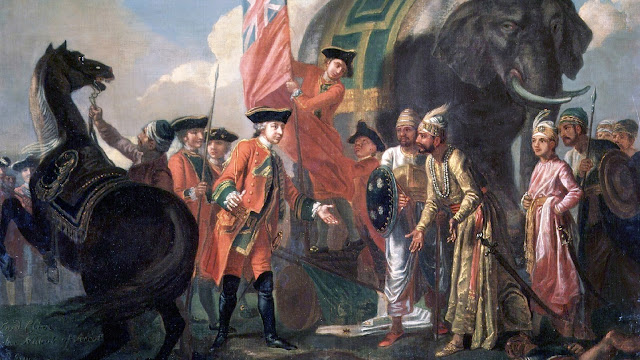 Insisting that textbooks wrongly attribute that the British ruled India between 1600 and 1857, Dalrymple, in an interview with South Asia Times (SAT) editor Neeraj Nanda in Melbourne on the book ahead of its launch, said what is little understood is the “the corporate nature of that period of Indian history”, which turned into a “role model and” a “new factor” in world history. The British rule, according to the historian, lasted for just 90 years, between 1858 and 1974.

Already making waves, “The Anarchy” tells the story of EIC, tracing its history, how it replaced the decaying Mughal Empire up to India’s First War of Independence in 1857, after which the British Crown took control, and how EIC became the world’s first global corporate power. While EIC did receive support from the British rulers, Dalrymple suggested, back home, its success should be attributed to the finance it received from Indian trading communities.

Pointing out how it all began with EIC, Dalrymple told Nanda, “In their very first charter in 1599, they got the right to wage war. By 1718 they were growing opium in Bengal, selling it illegally in China, buying Chinese tea and selling it in India and Europe. The tea in the Boston Tea Party was exported by EIC.” Dalrymple added, between 1740 and 1800, EIC had a “rivalry” in France. However, it succeeded in training 200,000 Indians, and for this it borrowed “money from Indian moneylenders.” It conquered “the whole Mogul empire” by adopting the double-edged tactic which – corporate violence and corporate lobbying, even as using corruption. In Britain, in 1687 EIC gave “British Parliamentarians share options.”

Talking about EIC’s “corporate violence”, Dalrymple said, there is “nothing unique about that”, insisting, it’s “very much the norm” even today, though in a more subtle way. Dalrymple explained, “It was a new business model. It was not the first corporation, probably the fourth.”

Dalrymple said, no doubt, “today, the biggest corporations, the Exxon or Walmart or Google or Facebook” do not adopt such ways, and “there is no such example now of a company holding sovereign territory as its right.” Exxon and Shell, for instance, “have small private armies… now they hold private guards only.”

However, today, things are “more subtle”. Now, “actually they do not need to do that (violence). Corporations now are extremely powerful and do data harvesting. They reproduce and can target the recording of this interview and send advertising to it… All these are variants of the same drive. Corporations, just as humans, have the DNA to eat, reproduce and survive. They have the thrust towards maximum profits they compulsively get away with.”

According to Dalrymple, “The book tells us how that happened, how on earth a company (EIC) that did not have more than 2,000 men on its rolls and its London head office never more than 35 people got away using Indian bankers to loan money to it to train other Indians to fight as mercenaries and to build up an army of 200,000. And they were able to fight the large Indian armies of the Marathas, Tipu Sultan, and the Mughals.” Suggesting that what happened may be “uncomfortable for both nations”, Dalrymple said, “The British are quite vocal in talking about bringing civilization, democracy, and the railways. In fact, the company did nothing. What they built were very few public buildings, communications, hospitals or universities. In fact, you have two very different periods.”

Thus, during the EIC, or the Company Raj period, it was “extracting” business through shipping and trading company, turning itself into a “colonial occupier”, even as taxing Indians who invested in silks, kalamkari, cotton, etc. for trading. Calling it a “collaborative” period, Dalrymple said, the money was “being borrowed from financiers”, including the Jagat Seth of Calcutta and Gokul Das of Benaras.

Further, Dalrymple said, one-third of the company employees were “married to Indian women producing Anglo-Indians.” In sharp contrast, he said, the British Raj proper was “not collaborative but imperialist”. During the latter period, what you had were “whites-only clubs, cantonments and the civil lines”, making “the British and the Indians completely apart.” It is during this period that India got “universities, schools and the railways”, said Dalrymple, adding, “I can’t say which is worse or better.”


The company issued bonds and asked Indian financiers to invest in them with a guaranteed return.  There was no safer investment than this

According to him, “The company was of a different religion, language and colour, so Jagat Seth and EIC merged as they knew the interest rates, share prices, fluctuations of the world economy, the world they both swam in.” He added, “The Hindu bankers of Patna, Banaras, and Allahabad, in the century that followed, made the decision to cut back with the Marathas and Mughals and go with EIC to keep their capital safe. That’s a business decision they made.”

Said Dalrymple, “We can criticize this decision from our perspective, but they did it as a business decision, according to the times they were operating in. Just like companies do it today to prefer one party over the other.”

This, he said, helped the company to become “resurgent and confident” by 1780. Acting “very cleverly”, EIC broke up the big Mughal ‘jagirs’, the Indian financiers bought them over, and these were made to become a part of the company. This helped the company to project itself as a “lesser evil compared to the Marathas and the Moguls.” Opined Dalrymple, “We can judge them (the financiers) today as traitors but they thought their capital etc. was safer with the company.”

Dalrymple explained, “At that time India had two important financers – Indian bankers and the company itself. The EIC issued company bonds and asked the Indian financers to invest in them with a guaranteed return. So, there was no safer investment … than the EIC bonds” The company raised money from Bengali investors, and used it to “buy arms to extend its power.”

Answering a question from Nanda that “Hindu nationalists believe the British did well by removing the Mughals”, Dalrymple said, Jagat Seth would surely agree with that, as “Jagat Seth used the company to remove the Mughals.”

But, he insisted, “It’s different from the modern Hindu nationalists. Many Bengalis also have the same opinion despite the company plundering and looting.” The level of collaboration for this is forgotten even in Britain, where they have taken a “romanticized view of our colonial encounter with India.” In India, conversely, what has been forgotten is the level of collaboration.”