Written by Sabrangindia | Published on: November 6, 2019

Chandra shekhar Aazad extends the olive branch again, he had earlier accused her of weakening the Dalit movement 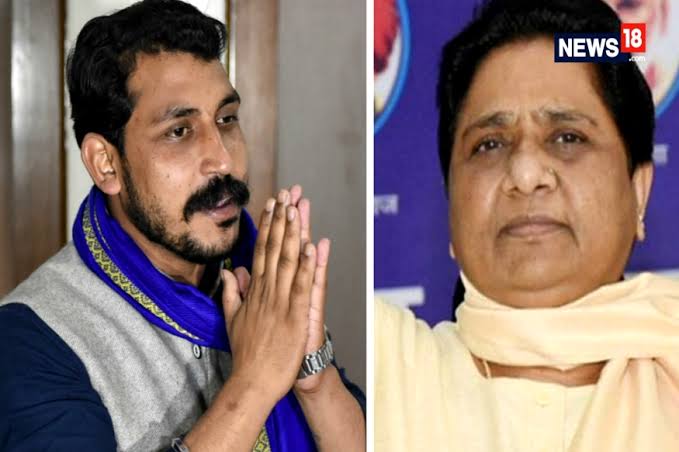 Recently out on bail after protests over the demolition of a Ravidas temple, Bhim Army chief Chandrashekhar Aazad has once again extended an olive branch towards Bahujan Samaj Party (BSP) leader Mayawati asking her to come together to fight against the BJP for its irresponsibility in case of the atrocities towards the Bahujan community in its tenure.

In an open letter addressed to her on Twitter, he has asked her to join him in a discussion over how to strengthen the Bahujan movement so that a befitting reply can be given to the incumbent government for its alleged anti-Dalit policies, The Indian Express reported. Stating that under the BJP rule, the assaults over the Dalit community has grown and that the constitutional provisions given to the backward communities have constantly been under attack, he said, “I believe the key to the problems of contemporary India is only with the Bahujan society. If there is a problem, we have to look within. It is my request that we must keep aside all our differences and sit together for deliberations. Because only discussions and deliberations can only open a new way …given that you are a member of the core team of Honourable Kanshiram, your experience is of importance to us. We hope that you will participate in this discussion.”

Acknowledging the slide of the community’s power, he reminded her in the letter that it was essential to join hands against the BJP because the ruling party had even returned to power in the bastion of Bahujan politics in Uttar Pradesh.

He called on her support to streamline Bahujan unity and politics, for being part of the core team of Dr.Kanshiram, her contribution would be of indispensable importance to the fostering of the community.

Azad and Mayawati have not had a very comfortable relationship. While he has often addressed her as ‘bua’ and even expressed his desire to see her as the Prime Minister, she has accused him of siding with the BJP in their ill-intention of dividing Dalit votes in Varanasi.

Azad too, had in the past accused her of weakening the Dalit movement when she decided to call of her party’s alliance with the Samajwadi Party and said that he would draw up a plan for the future of the Bahujans as they were in need of a strong alternative leadership.

The Bhim Army, led by Azad has been on a relentless drive to help Bahujans get an equal footing in all areas in the country. They have been vocal in their criticism against the increasing number of Dalit lynchings happening in India, and have now also taken the war for their rights, digital.

The letter from Azad to Mayawati come at a time when the Bahujan community has pulled up Twitter, the microblogging website for its ‘casteist’ attitude, accusing the website of verifying only those accounts they know belong to people of the upper caste.

In the onslaught that saw the Bhim Army lock the Twitter India office for suspending the voices of many dissenting scholars and intellectuals and purposely not verifying accounts of people who belonged to the lower castes, this letter from Azad shows that the Bahujan community is ready to strengthen its forces and claim their rightful space in the nation.

But will Mayawati accept his invitation?