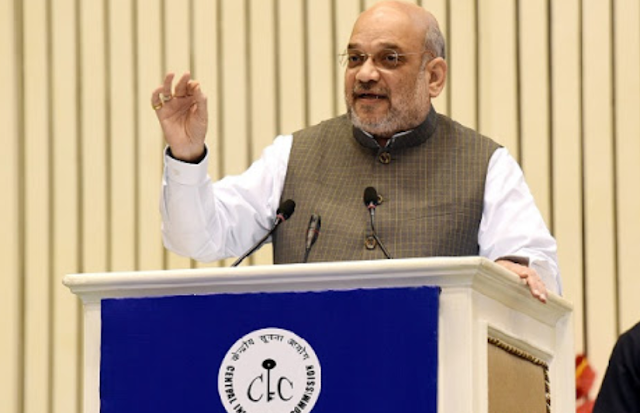 Pointing towards instances of undermining transparency, such as amendment to the RTI Act, electoral bonds, bank frauds, NPAs and unemployment data, in a joint statement, they say, "Subsequent to the abrogation of Article 35A and the dismemberment of Article 370 of the Constitution, the Jammu & Kashmir (J&K) Reorganisation Act, 2019, repeals the J&K RTI Act. The transparency law in the state was repealed without any transparency in the process itself!"

October 12, 2019, marked 14 years of implementation of the Right to Information (RTI) Act in India. The law has empowered millions of people across the country to exercise their fundamental right to seek information and hold the government accountable.

Never has the government’s commitment to transparency been as questionable as it is today, on the 14th anniversary of the RTI law -- information of critical national and public importance continues to be denied and the Act itself was weakened through amendments.

A convention was organized by the Central Information Commission, the first since the RTI Amendment Act 2019 was passed by Parliament, which dealt a serious blow to the law. Despite protests across the country and opposition from several political parties, the BJP government brought in amendments to the RTI Act.

It has been more than two months since the amendments received the assent of the President on August 1, 2019. However, till date the Central government has not promulgated rules.

Though minister of state for personnel and training Jitendera Singh and home minister Amit Shah spoke at the inaugural session of the CIC convention, they did not make any reference to the recent amendments to the law, nor did they give any indication of the time-frame in which rules will be made.

In complete denial of the dismal reality of the implementation of the RTI law, Amit Shah claimed that this government is committed to transparency.

Subsequent to the abrogation of Article 35A and the dismemberment of Article 370 of the Constitution, the Jammu & Kashmir (J&K) Reorganisation Act, 2019, repeals the J&K RTI Act. The transparency law in the state was repealed without any transparency in the process itself!

There is no clarity about the status of the appeals and complaints pending before the J&K State Information Commission (SIC), as the commission was set up under the J&K RTI Act. The state Act also had some progressive provisions not contained in the Central RTI Act -- such as time-bound disposal of second appeals.
The track record of the government on openness has been questionable. For instance, the government resisted disclosure of records and deliberations regarding demonetisation. Electoral bonds were introduced as a mode of anonymous funding of political parties through an amendment to the Finance Bill.

Preposterous claims were made by the government that this was being done to bring in greater ‘transparency’. BJP was the biggest beneficiary of the electoral bond scheme launched by the government in 2017-18, bagging 94.5% of the bonds worth a little over Rs 210 crore, masking the unholy nexus between corporates and the ruling party. The government has also kept under wraps information about bank frauds and NPAs. It also tried to suppress the release of the unemployment data.

Furthermore, scores of RTI users have been attacked and more than 84 killed in their quest for information and accountability. This month itself an RTI activist in Rajasthan was allegedly killed in police custody. Even as the attacks continue unabated, the government has failed to operationalize the Whistle Blowers Protection Act, which was passed in 2014.

To mark the anniversary of the RTI law, NCPRI members in many states held events resolving to protect RTI, increase it's usage and overcome the attempt to weaken one of the most radical freedom on information legislations in the world.

After the amendments were passed in Parliament, NCPRI launched a year long "Use RTI, Demand Accountability" campaign on August 1, 2019. To demand accountability from the government, RTI users and citizen campaigns have been filing and will continue to file RTIs on pressing issues of public interest.

Some of the RTIs already filed sought information on issues such as district mineral funds, lynching cases, Aadhaar and voter ID linkage, electoral bonds, the National Food Security Act amongst many others.