You might think that the culture war over race and immigration primarily transpires in dramatic events, like the woman who climbed the Statue of Liberty to protest Trump’s child detention policy or the events in Charlottesville last summer.

The culture war isn’t just playing out on the streets. It’s also a struggle over the dominant understanding of certain words. AP Photo/John Minchillo

But it also exists in the banal and everyday ways that we communicate.

It involves battles over the dominant meaning of words, and how we use those words to describe our values and construct our policies. For example, on July 19, House Speaker Paul Ryan urged conservatives to engage in a rhetorical battle over what he called the “hijacking” of traditional conservative terms like “Western civilization” by the alt-right.

Ryan asked conservatives to notice that a key term that they take for granted as universally understood had recently become contested. In a 2009 speech Ryan explained that “Western civilization” was “rooted in reason and faith”; it was a tradition that “affirms the high dignity, rights, and obligations of the individual human person.” Now Ryan fears that it is being construed to mean “white identity politics,” which is more like “racism” and “nationalism.”

Because we’re so immersed in our own culture and social networks, these rhetorical battles can be easy to miss; you have to look at them from the outside, which is a tricky thing to do.

One way to take a peek inside a culture’s discourse is to examine what rhetorical scholars like me call a culture’s “enthymemes,” which we can think of as the ways that words, phrases and ideas are understood in a particular community.

In the fourth century BCE, Aristotle coined the term “enthymeme” to explain how different words and arguments resonate in one community but not in others. Technically, an enthymeme is a “rhetorical syllogism” – an argument made with a premise that’s assumed or taken for granted, and so goes unsaid.

For example, when you hear someone say, “the states,” you know they’re referring to the United States of America. They don’t need to actually say it. More confusing is when people say “the city” because depending on where you are, “the city” could be San Francisco or Chicago. The difference between how we understand “the states” and “the city” is the difference between a commonly shared enthymeme and one that’s specific to a region.

If you want to persuade a group of people, then you need to understand what they understand, see the world the way that they do and use the words that they use to describe objects and ideas. Otherwise, you’ll just talk past them.

As Aristotle pointed out, what was persuasive in Athens might not be persuasive in Sparta. He thought that we could be most persuasive when we argue using commonly understood enthymemes and examples.

It can be difficult to see how enthymemes operate in a culture when you’re on the inside. It can help to look at how your culture is perceived by an outsider.

As part of my research for a book that I’m completing about the 2016 election, I’ve spent the past few months reading the message boards and websites of white nationalists, a group that exists on the fringes of American culture. It’s been fascinating to learn the white nationalists’ enthymemes and to see how they understand discourse about race.

I learned that white nationalists believe that racism is normal and that everyone else is a racist too. They are avowedly pro-white and believe that “diversity” is the dominant American culture’s code for a systematic program of promoting what they call “white genocide.” According to white nationalists, a conspiracy exists to exterminate white people “via mass immigration into white countries which was enabled by a corrosive liberal ideology of white self-hatred, and that the Jews are at the center of this agenda.”

Many of the responses to Clinton’s tweet understood his comment as a celebration of fundamental American values. Americans might disagree about how much diversity is best, but it has been generally understood that America is a “melting pot” and that diversity has made the nation stronger.

But not everyone accepted Clinton’s enthymemes.

Another respondent rejected Clinton’s enthymeme, arguing that calls for diversity are calls for the eradication of white people:

Imagine attempting to have a productive conversation about issues of race or diversity with someone who holds completely different enthymemes from you.

While white nationalist beliefs and rhetoric represent an extreme version of how different groups understand “diversity,” it’s possible to see how the meaning of the word is contested in attacks on university diversity initiatives. To one group, diversity initiatives mean allowing unqualified people to get an easy pass. To another, it fulfills an educational ideal of bringing people of different backgrounds and circumstances together. These different understandings make it that much harder to have a real debate. 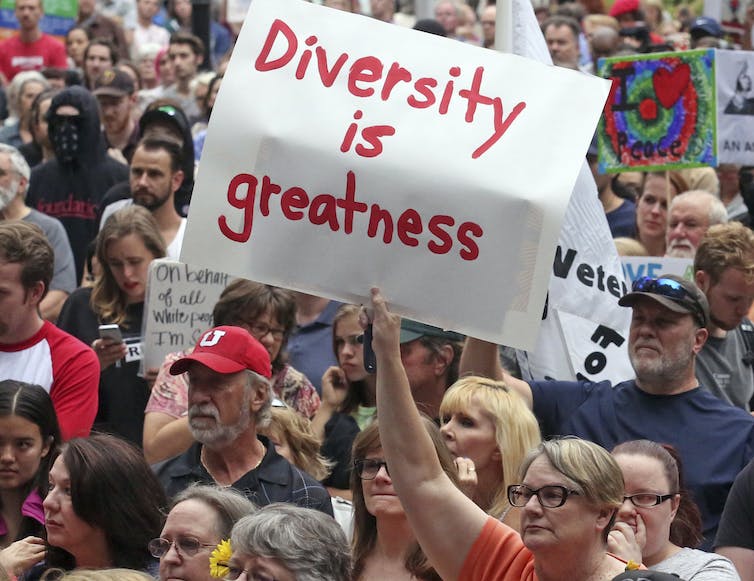 What comes to mind when you hear a word like ‘diversity’? AP Photo/Rick Bowmer

One way to describe this cultural moment is that we’re in the middle of a battle to control the nation’s culturally dominant enthymemes – the ways that we communicate our understanding of our nation and its ideals.

It’s productive for cultures and subcultures to have open disagreements about facts, words and values – otherwise, dominant ways of thinking about the world may become calcified and suffocate progress. Think about where we’d be today if no one had ever questioned the once dominant enthymeme of “citizen” that denied women or African-Americans the ability to vote.

Yet nations need to share enthymemes to function. Without a mutually shared understanding of facts, words and values, a culture cannot endure.

It’s possible that at this moment in history there is little that we all understand in the same way, with the same emotional intensity.

We see more rhetorical battles over the meanings of key terms during moments of transition and upheaval. The instability in our understanding of the meaning of “diversity” reflects the nation’s actual instability.