‘There Are Very Strong Concerns About The Indian Economy’

Written by Shreehari Paliath | Published on: November 5, 2019
Bengaluru: Joseph Stiglitz, 76, gently placed his walking stick beside the sofa and a stack of papers on the table as he settled in to savour some South Indian breakfast. He was in the city to deliver a lecture organised by a university. 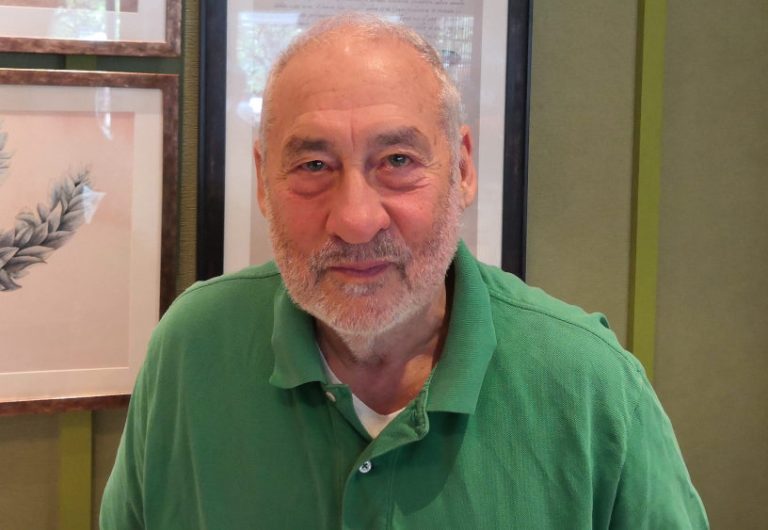 We can celebrate that companies in the gig economy make it easier for people to enter the labour force, but clearly part of their business model is exploitation and circumvention of existing regulation, says Joseph Stiglitz, 76, economist and 2001 Nobel Prize winner in economics.

It has been almost three decades since India liberalised and integrated with the global economy. It was the seventh largest economy in the world by gross domestic product (GDP) in 2018. But this growth has slowed, and is expected to shrink further in 2019-20, according to multiple global institutions.

“The data that I have seen reinforces very strong concerns [about the economy],” Stiglitz told IndiaSpend in the course of an interview. “I do not know anybody who is not in the government who is not worried.” Governments tend to “suppress data when it is on shaky grounds”, he added.
While India has been able to benefit from globalisation, there is a view that is “not an uncommon view but an unpleasant one”, that in a regulated market like India foreign players “have a disadvantage because the insiders know how to play the game”.

Stiglitz won the 2001 Nobel Prize in economics for his analyses of markets with asymmetric information. He was a member of the Council of Economic Advisers in the US from 1993-95, during the Bill Clinton administration, and its chairperson from 1995-97. Between 1997 and 2000, he served as chief economist and senior vice-president of the World Bank.

Stiglitz has authored multiple books on economics including People, Power, and Profits: Progressive Capitalism for an Age of Discontent; Globalization and Its Discontents Revisited: Anti-Globalization in the Era of Trump; and The Price of Inequality: How Today's Divided Society Endangers Our Future. In 2011, he was among Time magazine’s 100 most influential people in the world. He is a professor in the department of economics at Columbia University and founder and president of the Initiative for Policy Dialogue, a think-tank on international development based at the university.

In this interview, Stiglitz explains the impact of globalisation in the last two decades, and of populism, the rise of the gig economy, and the problem of inequality in India and the world. Edited excerpts:

How has globalisation changed in the last couple of decades, particularly with the rise of protectionism and populism and what impact have you seen on emerging economies like India?
Twenty years ago the common wisdom was that trade would benefit all. It was a contested view in both the [global] North and South. While it was held by a lot of elites, it was not universally held. Many developing countries only liberalised with the threat of the International Monetary Fund as a condition of getting aid in the structural adjustment programme.

I wrote papers in the early 1980s pointing out that [global markets] are not perfect risk markets and trade can make everybody worse off. Trade exposes countries to risk without risk insurance, producers of risky products may contract production that might hurt people in other parts of the economy, and similarly, many people in all countries could be worse off.

It was meant to be a warning against naive globalisation. Although it [paper] did not ask people to not go ahead with globalisation, but it says that those people who think that everyone will be better off have not proved the case. Under certain assumptions, it would make some better off while others would be worse off. The gainers could compensate the losers, but they never did. The other problem is the assumption that markets are perfect, which was not true.

When I wrote this nobody in the policy world paid any attention to it, even when I was in the White House and the World Bank. Eventually (by the time I wrote Globalisation and Its Discontents), there were examples of jobs being destroyed and not as many being created. It showed that we had to learn to manage globalisation better. It was not that globalisation was necessarily bad, but it was not good either.

India has gained a lot with its integration into the global economy (US and western Europe), including the technology sector, modernisation, [new] universities, etc. Though it is not so clear that better managed policies with respect to importing cheap Chinese manufactured goods would have led to a robust manufacturing sector [in India].

Young people seem to have found opportunities in the gig economy through cab aggregators like Uber and Ola, and other food delivery applications in India, often working long hours with inadequate benefits. In California, new legislation has made it harder for gig economy companies to treat their workers as contractors instead of employees. Similarly in India, there have been protests demanding labour benefits for workers in the gig economy. How do you assess the gig economy globally and its effect on economies like India?
At one level you can celebrate that they make it easier for people to enter the labour force, but clearly part of their business model is exploitation and circumvention of existing regulation, most of which have a good purpose.

In New York [city] there was a study on the wages paid to the taxi cab drivers on [such] platforms which said that they received $6 per hour which was below the minimum wage and a livable wage. This is also a dangerous wage because of the increased number of hours that a person would have to drive. New York city has passed a law that tripled the wage to about $18.

Knowing where your cab is and being able to call them has efficiency gains, but this could have been done even if it was regulated by taxi cabs. I think there are efficiencies that the gig economy can bring, but the business model is driven by exploitation and circumvention. We have to maintain the advantages the model offers but at the same time restore more bargaining power and regulate the bad aspects.

While you have maintained that “GDP is not a good measure of wellbeing”, India’s GDP growth has been revised downwards by multiple agencies. Further, there are issues of data suppression. Abhijit Banerjee, one of the 2019 Nobel Prize winners, believes that the “Indian economy is on shaky ground”. Would you agree?
One of the problems when there seems to be data suppression is that you cannot precisely know what the state of the economy is. But usually governments suppress data when they are on shaky grounds. They will suppress data when there is weak growth.
There are a number of indicators like consumption which are, to say the least, worrisome. It is hard to have a robust economy when the basic data for consumption and investment are weak, as they are [in India]. So, the data that I have seen reinforces very strong concerns [about the economy]. I do not know anybody who is not in the government who is not worried.

The pre-tax national income of the top 10% in India increased by nearly 23 percentage points to 56.1%, while that of the bottom 50% declined nearly 8 percentage points to 14.7% over 25 years to 2015, according to the World Inequality Database. The nine richest Indians now own wealth equivalent to the bottom 50% of the country. Why is there an increasing accumulation of wealth globally, and what are the solutions?
There are many dimensions to this problem. The people at the top figure out ways of not paying taxes, so their wealth multiplies in a way ordinary people’s cannot. The largest Foreign Direct Investment source for India for a long time has been Mauritius, which is a tax haven. A lot of the wealth [in India] has to do with special deals in telecom or defence, where the government gives a license or contract. It becomes difficult to know if the price is competitive.

In the US, real estate developers get zoning variances that allow them to do things others do not (through political connections). Two of the richest contributors to the Republican party were people who run gambling establishments globally. Gambling is a part of the money laundering industry.

Even in China, a lot of billionaires are part of the real estate industry with connections to local party officials and have access to land. In a natural resource economy, getting favourable access to it brings wealth. But there are also people like Jack Ma of Alibaba who have been really entrepreneurial.

In India, wealth was created in telecom and there is a very strong view that players did not do so in a regular and competitive way. I knew some of the [multinational] companies that wanted to play by the rules, and they said that it was just not possible. They had the technology and expertise but they said that India was a “dirty place”.

Was it the corruption and bureaucratic red tape? Are there solutions?
They could manage the red tape. It was a combination of corruption and thuggishness, although I never got a clear view of the nexus between outright thuggishness and corruption. But they left. These were honest and brilliant people [US companies], who would have brought talent.
It was not an uncommon view but an unpleasant one, which was that in a highly regulated country with big players, outsiders have a disadvantage because the insiders know how to play the game.

The solutions are that with the right government you establish rules of transparency, oversight, independent procurement agencies, independent corruption agencies. Singapore and Hong Kong have managed it to a good extent.

How does the rise of populism and majoritarian governments worldwide perpetuate the problem of inequality? And what changes do you observe in democratic institutions in India and the US, particularly in the role of civil society?
When people see unfair outcomes they get disillusioned with the system. Things can go a couple of ways. You could get a demagogue like [Donald] Trump who knows how to exploit the discontent but not cure the problem, [which can] make things worse. Then you have the other side where you have reform movements (which is hopefully happening in the Democratic party) where policies are being put in place for more competition, stringent ethics, oversight, among others.

The central governments of India and the US have taken measures to detain illegal migrants. Amit Shah, India’s home minister, has talked about a nation-wide expansion of the National Register of Citizens while the US is planning to take DNA samples from asylum seekers and other migrants. What is the fallout of such measures?
When things are not going well, people always want to blame somebody else. This may be foreign trade [for example]. But we made that trade [deal]. India may make the excuse that the US forced it to sign, but the US cannot make that excuse because we were the ones who wrote the deal.

Immigation is not the source of the problem in the US. The parts of the country with a lot of immigration love their immigrants. We could not function without our immigrants. It is a problem in the country where immigrants do not want to go, and where there is emigration and not immigration. The issue is that [in these parts] societies are collapsing as there is no economic opportunity, reduced life expectancy, and issues of drug overdose, alcoholism and [high rates of] suicide. This is the problem, not immigation.